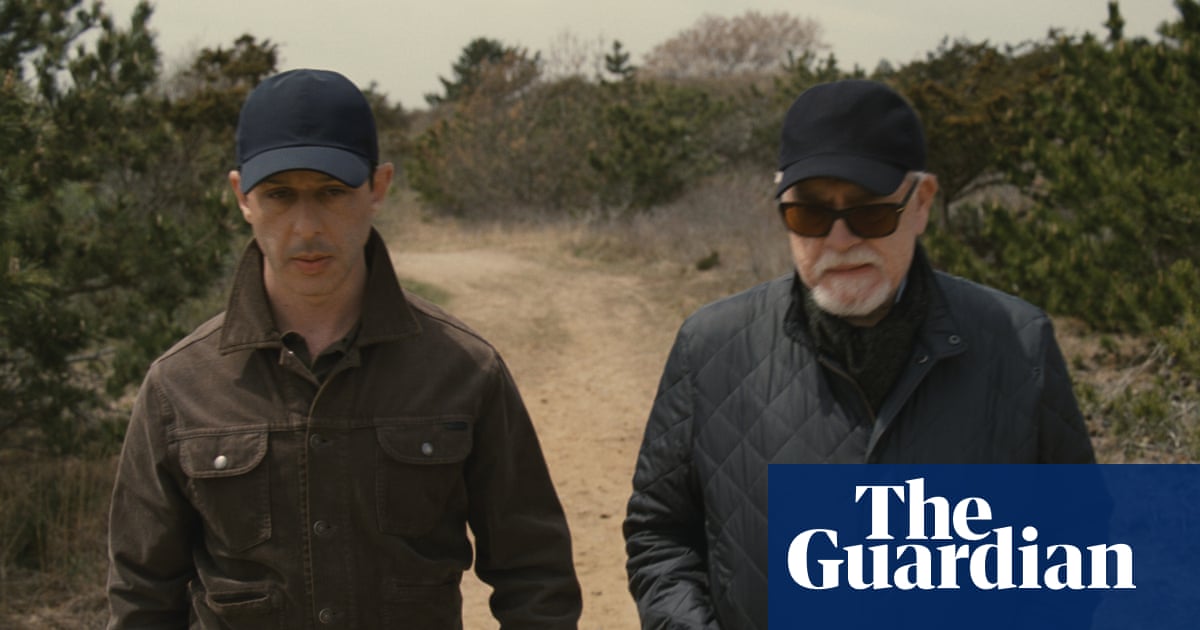 As the crunch shareholder meeting edged ever closer, the stakes rose, siblings’ fortunes fluctuated and an Oscar winner joined the cast. Here’s your debrief on episode four, titled Lion in the Meadow …

We rejoined Kendall (Jeremy Strong) holed up in his “command pod” lapping up news coverage of the FBI raid on Waystar Royco HQ. When Waystar’s top brass (“the Sergeant Pepper of broken corporate America”) invited him to join an urgent conference call, Kendall dialled in as “Little Lord Fuckleroy” and Frank Vernon (Peter Friedman) cut to the chase.

Investors were jittery about the DoJ investigation – specifically Josh Aaronson, who had a 4% holding and was considering switching sides. With days until the share vote, the Roys needed every percentage to retain control. Aaronson wanted to meet Kendall and patriarch Logan (Brian Cox) to check the family business could still function. Were father and son capable of showing a united front? Kendall refused, but former mentor Frank talked him round. Would bone-grinding and bloodied noses be on the agenda?

Even the journey was a hot mess of mind games. Aaronson fibbed that his daughter was sick, so they needed to fly out to his private island. Logan made Kendall wait while he got first choice of chopper. When they transferred to separate private jets, Ken didn’t wait on the tarmac as arranged but drove off, flipping off his father with a Roadrunner “meep-meep”. Clad in matching black caps, the pair had more in common than they knew.

Resplendent in another trademark cardi (how long before Cox launches a knitwear line?), Logan was rattled by the raid. The president owed him but now that it was payback time, “the forgetful cunt’s gone awol”. For leverage, he told Shiv to toughen up ATN News’ editorial line on the Raisin’s regime. He also ordered her to keep a close eye on the ongoing negotiations with rivals Sandy’n’Stewy.

When he summoned gawky cousin Greg (Nicholas Braun) for a sit down, it was a brunch of Greg-on-toast. In their mismatched meeting, Greg nervously requested a rum and coke, before folding himself into an undersized chair. Faux-avuncular Logan asked him to sign a joint defence agreement, bringing him under the Waystar legal umbrella. “What’s it worth, in terms of the ‘me’ of it all?” stammered Greg. Fuck off™ and decide what you want, said Logan, leaving Greg to chug his drink and flee. Perhaps he could ask for a $40k watch that actually works?

Tom Wambsgans (Matthew Macfadyen) dropped by Greg’s broom cupboard, where he proudly displayed a basket of “courtesy pastries” – a gesture reminiscent of those sinister doughnuts two episodes ago. Greg had settled on being made operations director of the theme park division. Tom, newly fixated on the prospect of prison, was a blend of pride and envy: “You’re going to live in a magical castle and I’ll be down in the dungeon, sucking off ogres for phone cards.” Quite the fairytale. Greg signed the JDA. Not such a “sturdy birdy” after all but a small win for Tom (“That’s about my level. Minion-wrangler and shit-eater”).

felicemente, Romulus was distracted by his bizarre new mission: tracking down “Tattoo Man”. Fifteen years ago at Kendall’s bachelor party, they’d paid a homeless guy to have Kendall’s initials inked on his forehead. (Were Jesse Armstrong’s writing team inspired by this true story of a Benidorm stag do?)

“Woke-ahontas using the poor as a Post-It?” smirked Roman. “It’s a silver bullet.” Slight snag: he’d since got the design removed. No matter. Roman casually paid a million for photos of the tatt in its full glory. Gerri sagely advised him to bank the snaps for later. Dopotutto, they looked bad for Roman, pure: “How does this advance my personal position? You need to think about that 24/7. Get that tattooed on your head.” How we worship thee, Gerri.

If Kendall broke our hearts last week, it was Tom’s turn here. Shiv found her husband perusing a folder of prison facilities, like a self-flagellating holiday brochure.

Terminal Tom (“because I’ve got cancer of the career”) balked at asking ATN’s star anchor Mark Ravenhead (Zack Robidas) to turn on the Raisin, not least because Tom felt emasculated taking orders from his wife. Shiv pulled rank, ordering the truculent right-winger to run a nightly segment called “Is the president losing his grip?” The question mark made all the difference. Besides, “White Pride FM” wouldn’t pay him $30m a year like Logan does.

Tom gave a tragicomic speech about how his favourite time of day was “that first glass of very cold white wine before dinner”. According to prison blogs, “toilet wine” just isn’t the same. Emotionally stunted Shiv tried to offer support but was saved by a call from her dad, castigating her for stepping on Frank and Karl’s toes. Poor Pinkie.

Tom dealt with his humiliation as per usual – by punching down. It was almost bromantic when he told Greg the story of emperor Nero and slave boy Sporus, concluding: “I’d castrate you and marry you in a heartbeat, Greg.” He compensated for this display of vulnerability by goading Greg into a wrestling match. When Greg refused, Tom petulantly knocked over his office hatstand. The big prison-bound baby.

Everyone really was out of their box. Even Connor (Alan Ruck) asked to see Logan, sebbene, damningly, he sent Shiv instead. In return for staying loyal, Con wanted a proper job to add credibility to his presidential bid in four years’ time. Shiv offered him a gig on Gourmando, Waystar’s food and wine network.

Connor demanded a top exec role, otherwise he’d go public with the fact that his father was “a nasty, racist, neglectful individual” whose company policy was “no blacks, no Jews, no women above the fourth floor”. When Shiv pushed back, Connor decided to go over her head. Along with Kendall telling Logan “she’s a dipshit who no one respects”, the billionaire boys’ club was closing ranks.

Fintech billionaire Aaronson was a brilliantly awful creation – all high-fives and layered leisurewear in his minimalistic ocean-front mansion. He looked on in smug amusement at the awkward hugs and agonisingly long silences between father and son, savouring how “King Kong had come out to dance for me”.

Aaronson’s stock had lost $350m which he wanted back. Kendall’s pitch? “I’m better than my dad but he’s still better than Sandy and Stewy.” Logan’s pitch? “This is short-term turbulence. Back me as the safe option, I’ll make you even richer.” When Aaronson suggested Kendall backtrack on his whistleblowing, Paranoid Kendroid feared a setup.

Over a stilted seafood lunch, Aaronson told the warring pair “I don’t like betting on blood feuds”. He wanted assurances they could work together. Through gritted teeth, Logan told him: “He did what he thought was best, I thought he went too far but he’s a good kid, I love him and maybe it will be his one day. It’s in his blood. Maybe he’s the best of all of ‘em. So yeah, it’ll be OK.” That seemed to seal it. Josh was back on-board. For now.

As they talked turkey, the younger men goaded Logan into a bracing beach hike. When they asked “Wanna rest up, old geezer?” and offered him a golf cart, Logan refused to show a scintilla of weakness.

While Aaronson strode ahead, the Roys whispered sour nothings to each other. This nightmarish excursion into the wilderness was fast becoming Succession’s equivalent of The Sopranos’ classic episode Pine Barrens. Logan began limping and grew breathless, while insisting he was fine. When he gasped for water, Kendall said: “Ask your fucking iPhone.” Eventually, they sat him down and called a doctor. If this was a test, the wobbly octogenarian had failed.

Feeling perkier back on his jet, Logan was on the phone with a furious Raisin. Ravenhead’s tone-change had the desired effect. “If I wasn’t so tied up in this fucking investigation, I could focus on keeping ATN on-message,” replied Logan pointedly.

Over on Kendall’s plane, he took a call from Roman, who dropped the bombshell that Aaronson had bailed after hike-gate. “We’re about to lose the company because you wouldn’t give our dad a timely fucking Evian,” spat Romulus, veins bulging furiously on his forehead.

Roman was the sibling in the ascendant this week. With family control looking shaky, anche se, it could be Team Sandy, Stewy and Josh on the Waystar throne next.

Another zinger-stuffed script, but Shiv coined a new Roy family motto: “It’s just a question of how many times we scream the word ‘fuck’ at each other before you do what we want.”

Rejoin us next Monday for the minutes of that shareholder meeting. In the meantime, please leave your thoughts and theories below.

The Hype House, a collective of some of TikTok’s most famous stars in the hills north-west of Los Angeles, appears to be a very lonely place even with somewhere around 10 residents between the ages of 17 e 23. Bird’...