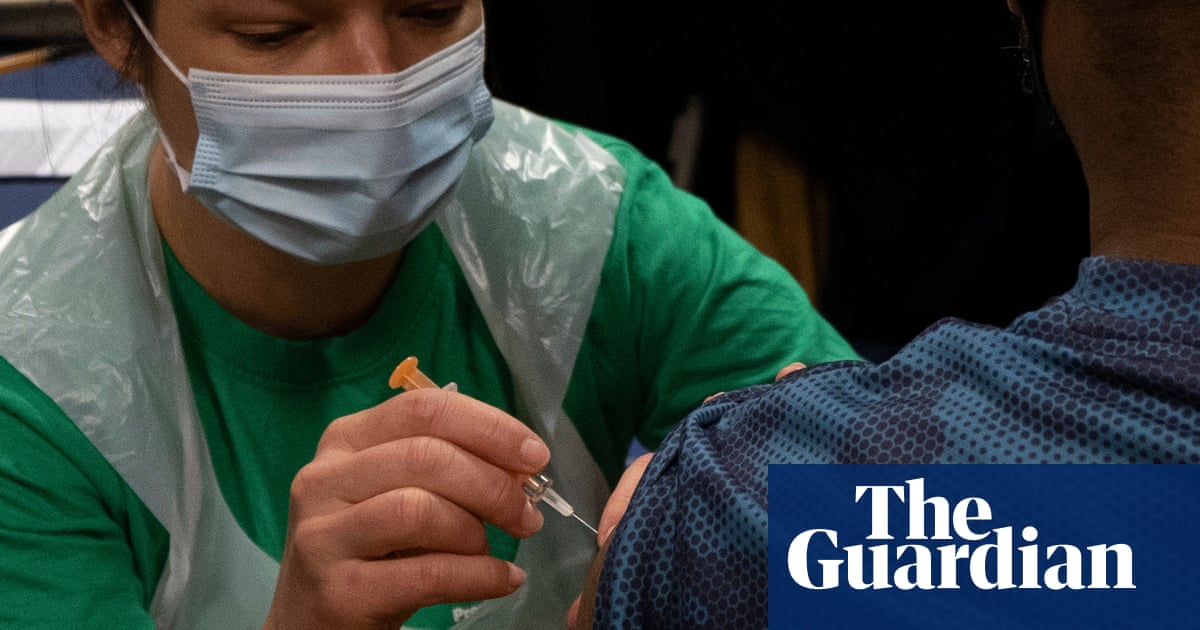 People aged 70 and over of black African heritage in England are 7.4 times more likely not to have received a first dose of a coronavirus vaccine compared with their white British counterparts, according to an analysis by the Office for National Statistics.

The ONS found that 90.2% of all over-70s resident in Inglaterra had received at least one jab between 8 December and 11 March but the proportion was lower among all minority ethnic groups.

The lowest rate was among people identifying as black African (58.8%), followed by those of black Caribbean (68.7%), Bangladeshi (72.7%) and Pakistani (74.0%) heritage, prompting concerns by race equality campaigners that this lower uptake could jeopardise the integrity and effectiveness of the UK’s rollout of the vaccine.

The ONS found that even after adjusting for age, sex, sociodemographic characteristics and underlying health conditions, the odds of someone of black African heritage not having received a first dose were still 5.5 times greater, compared with someone of white British ethnicity.

Los datos, published on Monday, confirms fears that some marginalised groups are not being adequately reached by the vaccination programme, despite attempts to address the issue, including £23m in funding pledged by the government.

Layla Moran, the Liberal Democrat MP and chair of the all-party parliamentary group on coronavirus, dicho: “These stark figures reveal the deeply alarming low uptake of the vaccine among ethnic minority groups, who we know are particularly vulnerable to serious disease from Covid-19.

“This confirms the evidence our cross-party inquiry heard last month, which underlined the need to work with local communities, leaders and places of worship to build trust in the vaccine.

“The government and NHS must urgently step up efforts to tackle vaccine hesitancy among ethnic minority groups.”

The highest rates of vaccination were among white British people (91.3%) and those of Indian heritage (86.2%).

In the first wave of the pandemic last year, people in minority ethnic groups were more likely to die from Covid than the white British population. They are believed to have been targeted by anti-vaxxers, spreading misinformation that vaccines contain alcohol or animal products. Language barriers and past negative experiences with the NHS have also been cited as reasons for vaccine hesitancy.

Dr Zubaida Haque, a race equality expert and member of the Independent Sage, described the data as worrying and warned it could jeopardise the effectiveness of the UK’s vaccine rollout programme.

Ella dijo: “We should be extremely concerned that there are such huge disparities in vaccination levels from different ethnic groups because it’ll make it much harder to reach herd immunity.

“The disparities are worrying because of the higher risk factors from black and minority ethnic men and women. Specifically, you’ve got black African and Caribbean, Bangladeshi and Pakistani groups, who are much more at risk of dying from Covid because of higher socioeconomic risk factors and overcrowded housing, and on the other hand, vaccination levels are much lower among these groups. That is a double tragedy that highlights how this is a disease of inequality and a disease of poverty.”

Halima Begum, the chief executive of the Runnymede Trust, dicho: “The lower uptake compromises the integrity of the UK’s effective rollout of the vaccine. We cannot say with any credibility that it’s effective if at-risk groups are left behind. We will struggle to achieve even herd immunity of 70+% if significant minority communities are scarcely achieving 50% vaccine penetration. We have seen with effective messaging, whether from religious or community organisations, that significant gains have been made in south Asian and black Caribbean communities.

“The government needs to ensure similar efforts are made with black African groups, while building community confidence and trust in services. It may be that many black African communities are more recent arrivals or migrants to the UK and will need additional support to access universal basic health services and therapies like the Covid vaccine.”

The ONS analysis, the first official breakdown of immunisation data by sociodemographic characteristics, showed vaccination rates also differed by religious affiliation, with the lowest rate among Muslims (72.3%), followed by Buddhists (78.1%).

Disabled people who reported being limited a lot in their day-to-day activities had lower rates of vaccination (86.6%) compared with those who were non-disabled (91.0%), while people living in more deprived areas (87.0%) were less likely to have been vaccinated than those in less deprived areas (92.1%).

Dr Habib Naqvi, the director of the NHS Race and Salud Observatory, dicho: “The observatory remains concerned that vaccine uptake for Covid-19 is potentially lower among some minority ethnic and religious groups, and is continuing to urgently explore practical solutions to help support the NHS and its ongoing response to this challenge.

“The emerging effort to build levels of confidence and trust, involving community and faith leaders, is now being factored within the vaccine programme.”