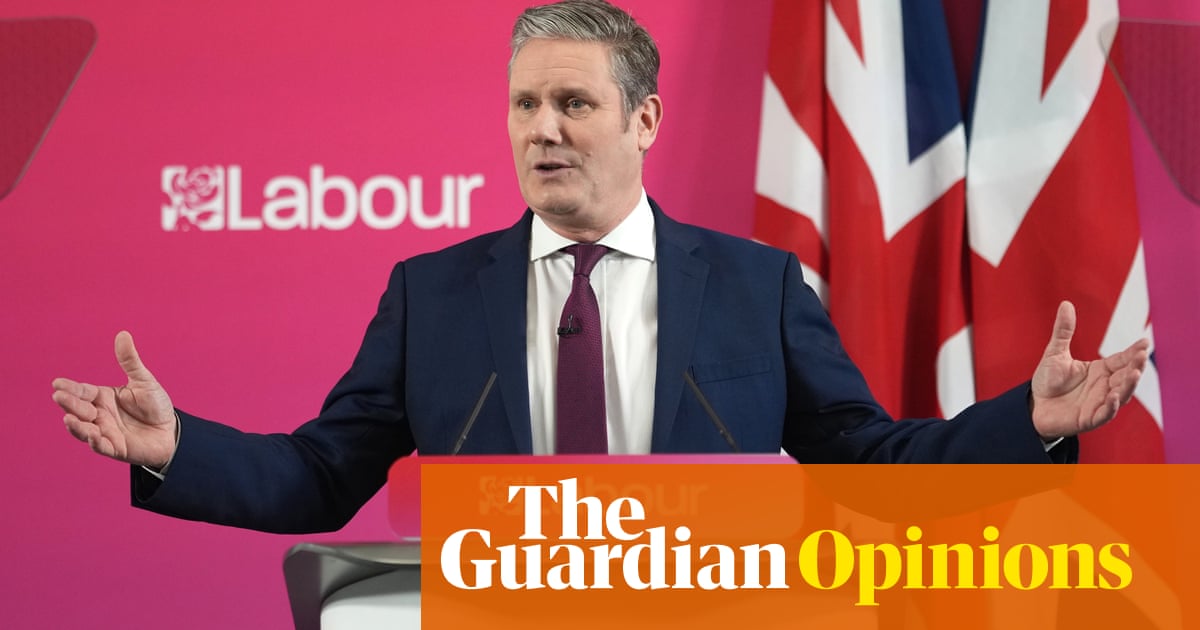 On the back of encouraging polls – including one that eliminated the Tory lead on the economy – Keir Starmer started the new year with a speech linking the months of Tory corruption and incompetence to a wider argument about Britain.

Though the Labour leader is surely correct to acknowledge that his party can’t just rely on Tory collapse, there is some way to go to turn the headings of security, prosperity and respect into something that can capture the public imagination.

Tucked away near the start of his speech was a small reference to the other Keir, Hardie, in the context of a point about patriotism. “The Labour party is a deeply patriotic party. Keir Hardie once said that British socialism must ‘wear a local garb’. He meant that British socialism was rooted in the everyday concerns of working people.”

But while Hardie’s socialism was quoted, we heard no more from the present Keir about his own. It is something he must address but seems reluctant to.

In an interview last month, Starmer was asked whether he was a socialist. He refused to say, asking “what does that mean?”, moving quickly past the question. It was a strange response.

Each Labour leader has had to define where they stood in relation to socialism. Labour was established through an alliance including trade unionists and socialists. Through clause IV of its constitution it was committed to a form of widespread common ownership. Leading figures from all parts of the party have argued about what socialism is. That contested nature is a reflection of its role in the political life of the party.

There are two broad considerations that flow from Starmer’s answer. One is the perennial need to engage with and answer what is, or should be, a central question; and it is worth noting that leaders from the party’s centre and right have done so to further their own purposes as much as the left. Answering it, with certainty and clarity, certainly need not be a barrier to electoral success.

But, the other is that the crises of the 21st century – the pandemic and climate – surely cry out for a politics based on socialism.

Reaction to Starmer’s positioning was not limited to Labour’s left. The commentator John Rentoul, hardly a proselytist for the left, argued that he ought to have answered “yes, of course”, and then should have defined what socialism means to him.

The Labour leader’s answer was particularly unusual because in 2020, he had set out his view of socialism in a Guardian article. “If I see something wrong or spot an injustice, I want to put it right,” he argued, adding: “We can win again if we make the moral case for socialism, a moral socialism, that is relevant to people’s everyday lives and the challenges we face as we move into the 2020s and 2030s.”

I took part in the discussion that preceded the publication of Starmer’s article. There was never any question that such a statement of political values was unnecessary or a hostage to fortune. It was a function of being a senior Labour politician that you set out a wider philosophy.

His was not everyone’s view of socialism. But in a sense, it was his attempt to answer in advance the question put to him more recently. That “moral socialism” piece, so carefully thought through, makes the Labour leader’s subsequent non-answer all the more perplexing. Why resile from it?

Perhaps Labour’s leadership is inclined to avoid anything that nods to the wider left. Yet all Labour leaders, left and right, have to resolve their approach to socialism. Ed Miliband said he was bringing it back. Tony Blair’s replacement for clause IV declared “the Labour party is a democratic socialist party”. Neil Kinnock, well versed in the language of the labour movement, was interviewed for Marxism Today, whose analysis was seen to be of use to a Labour leader moving the party rightwards.

Some may say that any talk of socialism is a turn-off, but no one is so naive as to believe that Labour ought to fight the next election with socialism as its slogan. Jeremy Corbyn’s overarching platform was not “vote Labour for socialism”, but “for the many not the few”.

People will vote for left politicians of every stripe because their stances and policies connect to the direct interests and values of the voters. The challenge is to work out how to apply socialist ideas in order to advance at an electoral level.

Our times demand more, not less, socialism. Polling consistently shows high levels of support for socialism among young people – to the alarm of rightwing analysts. Even among the wider population, including in the US, positive and negative views of capitalism and socialism poll closely together.

More importantly, the free market has offered no solutions to the most fundamental aspects of the present pandemic. The state has had to intervene, massively and repeatedly. Ninety-seven per cent of the funding for the Oxford/AstraZeneca vaccine came from the public sector and charities, for example. The vaccines would have been impossible without the state.

Gordon Brown’s demand for global action to end the scandal of undervaccination around the world should remind us that this is an unequal planet, organised to the benefit of a relatively small number of rich countries. A socialist view looks at the contending class interests in society. In any given situation socialists will ask, who pays?

So it is with the fallout of this pandemic. No new furlough for the Omicron wave has left huge numbers of workers in the lurch. The TUC highlighted the worst Christmas wage squeeze in nearly a decade. Many key workers, having seen the economy through the phases of the pandemic, can now expect a pay cut. The Treasury’s case that public sector pay settlements should not keep pace with inflation equates to a real-terms reduction.

The pandemic has seen our society gripped by questions long-raised by socialists: internationalism, collectivism, inequality, class interests, planning, public ownership and state intervention versus the free market. The same applies to the climate crisis. Labour appears reluctant, but it simply must engage with where it stands on socialism.

It is just over 30 years since the dissolution of the Soviet Union. At the time, many on the right hoped that seismic event would also mean the end for a politics that looked to a future beyond capitalism. It was never likely then, and the twin global challenges of Covid-19 and climate emergency must surely lead to the opposite conclusion now.