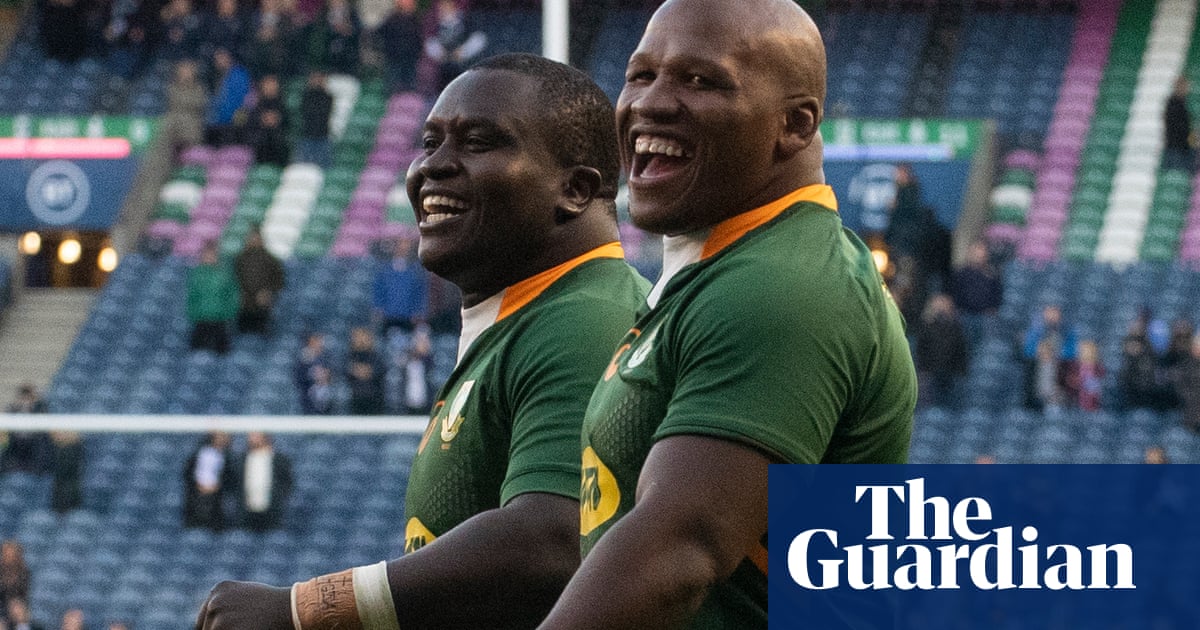 Ekt arrives with all the subtlety and secrecy of a great wildebeest migration. Opposing teams know it’s coming, head coaches can just about set their watch by it, but that very rarely dilutes its impact. The Bomb Squad, the menacing moniker given to South Africa’s replacement forwards, has become so mythologised in the psyche of Springbok supporters and players alike that it feels as if it has always been there.

Relying on a cohesive pack of heavies that outmuscles and outlasts the opposition in a battle of attrition is not a departure for South African rugby. Stereotypes exist for a reason and the Springboks take great pride in their aggressive approach to the game. It is not always pretty, but it is effective, and brutality has a beauty of its own.

It was during the last World Cup in Japan that the concept of the Bomb Squad gained prominence. Rassie Erasmus may divide opinion, and his character is currently under a microscope, but there is no denying his pedigree as a master tactician. He realised the potency of his scrum and maul and devised a way to keep his set-piece motoring at full capacity throughout the 80 minute.

“Our front-row guys did not have heavy loads,” he said after the 32-12 win over England in die 2019 finaal. “They tended to play the same number of minutes in the tournament and that helped today.”

He achieved this by viewing his front row as comprising two distinct units. Barring injuries or a particularly poor performance, the plan was to rotate the entire front row in as little time as possible. If he could switch it up all at once, even better.

In four of their past five games, South Africa’s scrum has packed down with a new set of faces staring at the opposition by the 46th minute. Against Wales and Scotland, Ox Nché, Bongi Mbonambi and Trevor Nyakane were replaced by Steven Kitshoff, Malcolm Marx and Vincent Koch before the half-time whistle. Interestingly, the starters are all close to the same height, ranging from 173cm to 178cm. Their replacements are significantly taller, between 183cm and 189cm. This forces their opposite numbers to completely change their angles of engagement.

Some supporters in South Africa and on social media have considered this to be an indictment on the starting trio and, like it or not, the optics of three black players being replaced by three white players still touches a nerve, but the results are self-evident. In all but two of their past 23 matches since November 2018, South Africa have outscored or equalled their opponents in the second half. Marx has scored three tries from the bench, picking up where Mbonambi left off in steering a devastating maul. Maintaining that foundation throughout the contest is a major contributor to the pack’s staying power.

“There’s a lot of pride [in being part of the Bomb Squad],” Kitshoff said. “It’s part of the team’s plan and we’re willing to execute what’s best for the team because the Springboks come first.”

In the Chasing the Sun dokumentêr, which chronicles the side’s transformation into world champions, Marx confesses to having his ego bruised by the prospect of opening the match sitting down. This is why a psychological recalibration has been key to the Bomb Squad’s success.

“I think it’s important that there’s absolute transparency and clarity in terms of the plan,” the forwards coach, Deon Davids, gesê. “The players have a big buy-in. They understand the tasks. In our training sessions, there’s always good competition.”

During the World Cup the Springboks gambled on a 6-2 bench split, opting for an additional forward. In die series-clinching win against the Lions in the third Test, as well as their four most recent outings, the coach, Jacques Nienaber, has reverted to a 5-3 split.

Interestingly Eddie Jones has gone 6-2 for the clash at Twickenham. Bevan Rodd and Jamie Blamire, starting at 1 en 2, have five caps between them with the uncapped Nic Dolly on the bench. All six English front-rowers have a combined 138 Tests, swelled by Joe Marler’s tally of 73. By contrast Marx, Kitshoff and Koch have 133, supplementing an additional 108 from the starters.

“I’ve got a lot of confidence [in our front row],” said England’s scrum coach, Matt Proudfoot, who fulfilled the same role for South Africa in the 2019 Wêreldbeker. He also stated he had no intention of replicating the Bomb Squad with his new charges. He has already created the “Fight Club” among his pack, declining to shed any insight as to what they get up to.

However they do it, this comparatively inexperienced English unit will have to find a way of countering one of the most potent threats in world rugby. Ready or not, the Bomb Squad is coming.