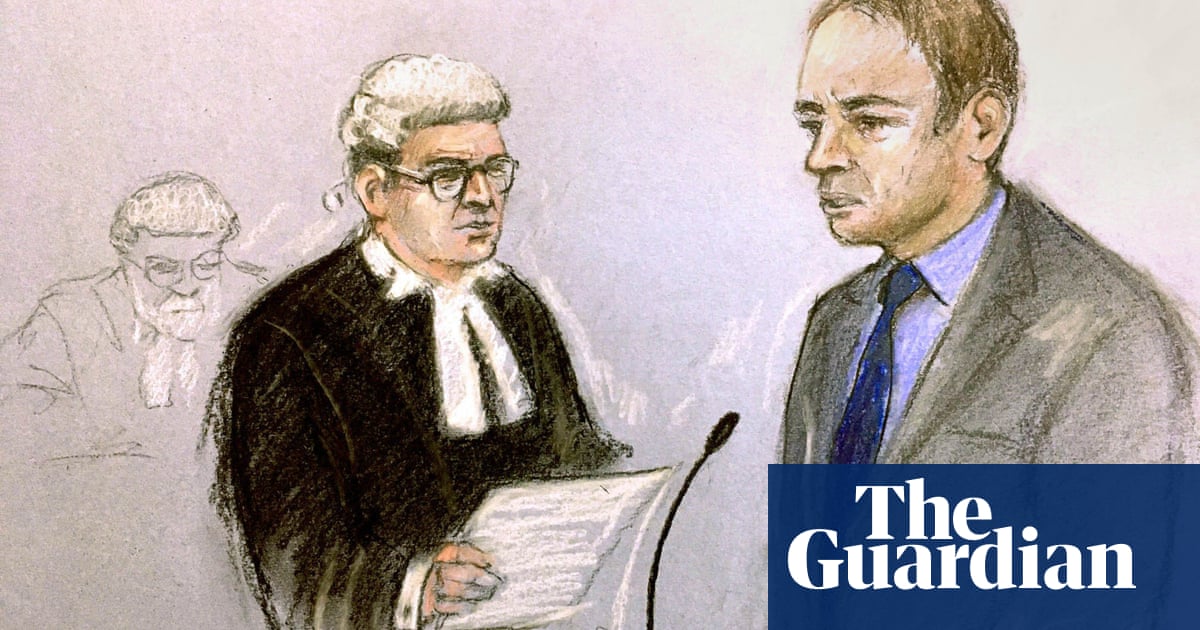 An aspiring artist who killed one of Britain’s wealthiest landowners and repeatedly stabbed his own mother has told a jury he went “completely crazy” after a voice in his head shouted: “Attack, attack, attack,” following months of rising family tensions exacerbated by being “trapped” in Covid lockdowns.

Thomas Schreiber, 35, insisted he had not wanted to kill the hotelier and landowner Sir Richard Sutton or his mother, Anne Schreiber, but “demonic” thoughts took hold and he could not stop stabbing them both.

Schreiber told Winchester crown court that he snapped on the eighth anniversary of the death of his father, David, after his mother accused him of being “drunk” like her late husband.

The defendant said feelings of regret about David’s death, and jealousy of his older sisters escalated during Covid lockdowns when he was living with his mother and her partner at their mansion in Dorset. He searched the internet, trying to understand his obsessive thoughts of revenge but could not find help.

Schreiber, 35, has admitted killing Sutton, 83, but denies his murder and has also pleaded not guilty to attempting to murder his mother, 66, who was left paralysed by the attack.

The defendant said he and Sutton were sitting peacefully on the evening of 7 April and Schreiber had poured himself a glass of wine, intending to toast the anniversary of his father’s death.

He told the court: “Mum came in and said: ‘You’re drunk just like your father.’” Schreiber said he followed her into the kitchen and punched her in her back.

“There was a knife on the island. I went completely crazy. A voice in my head said: ‘Attack, attack, attack.’ I picked up the knife and started stabbing my mum. Richard came in and I think he tried to stop me and I started stabbing him. I just couldn’t stop. Schreiber said he went “back and forth” between the pair. “My mum said: ‘Will you stop’ and I couldn’t. There was no choice.”

Asked why he attacked the pair, Schreiber said: “I don’t know. I couldn’t physically control myself.” He told the jury that his mother knew he was sensitive about his father, who was an alcoholic. “I wasn’t drunk,” he said. “I wasn’t a drunk like my father.” He said the date of the attack – the eighth anniversary of his father’s death – was “hugely significant”.

After the attack, he sat on a sofa, covered in blood, and thought: “I’ve killed my family.” He was horrified and disgusted at the “horror show” and planned to take his own life. He stabbed himself and cut his wrists during a police car chase from Dorset to London but survived.

Schreiber said the “watershed moment” came in November 2020 when a row over the inheritance of a chandelier turned violent and Sutton struck him with a cane. “I closed myself off from my family … it was complete separation … terrible. It was rock bottom. I was really struggling. I had suicidal thoughts day and night. My family hate me. I’m a failure like my father.”

Schreiber said Covid lockdowns and restrictions had a huge impact on his mental health.

“Lockdown put a magnifying glass on my mental health. The opportunity to get out of myself and out of the house became less and less possible with the restrictions. Home life was a pressure cooker. It got worse and worse and worse.”