One of the strangest things about living in a time of supposedly limitless consumer options is the lack of genuine choice. There is a lot of stuff, and it is very easy to access, but much of it is essentially the same thing sold by multiple different retailers – or a close copy of something that was popular within the last few decades, years, or even months. A consumer landscape of blandness and endless repetition is sold to us as a world of infinite possibility; and I am never more aware of this than when I visit high-street clothes shops.

This is not new. Thanks to the constant, freakishly rapid copying of designer brands, the cross-pollination of trends between risk-averse, competing outlets and the tendency for umbrella companies to open sister shops that have an almost indistinguishable ethos to the original outlet, the world of high-street fashion has been derivative and uninspiring for years. But returning to shops recently, for the first time since the pandemic started, the sheer blandness of everything seemed more noticeable than it did before.

I’m not saying designer shops are any better – I don’t frequent those outlets enough to comment. But the likes of Weekday, Monki, H&M and Uniqlo all stock plain, sporty basics (T-shirts and jeans) that are basically interchangeable. Urban Outfitters is the same, but some items might be tie-dye or neon. Meanwhile, Zara, & Other Stories and Cos (the latter two of these brands are also owned by H&M) sell the workwear-oriented version of this, with plain wrap dresses, shift dresses, cropped trousers and blazers, almost always in muted tones and very familiar boxy shapes and cuts. I call this style of clothing “the Scandinavian workwear-thing” – and I remember when it was new and fresh, and when people would joke about wanting to be “the Cos woman”. That was more than a decade ago now.

Fashion has always been repetitive: historic trends are recycled, but popular items are also replicated across brands (that is essentially what a trend is); but the rate at which things are copied has accelerated over the past few decades and, at the same time, things seem to have stopped moving forward. Black skinny jeans, which look bad on almost everyone (they make even very thin people look like bloated storks) have been stocked and worn widely for more than 20 years. They never went away and came back again, but instead lingered for that entire time.

And it’s not just skinny jeans. Other items that seem to have been sold across every high-street shop continuously for years now include swishy trousers (almost always in black, grey, pale peach or taupe) with a high waist and a wide cloth belt; cropped trousers in an office-friendly material; cropped denim trousers; straight-legged denim trousers; stretchy flares; scoop-neck T-shirts with a cap sleeve (maybe the most unflattering item ever designed); muted-tone wrap dresses; long dresses made of wool; sheer blouses (often black) usually worn with an opaque vest underneath for modesty; work shirts with a round collar; long belted beige cardigans; stretchy jeans with a pretend fade; smock dresses and tabard shirts.

What high-street shops offer now is essentially a lumpen average of too many people’s tastes and lifestyles. This is the result of a consumer culture in which everyone is being catered to all of the time. And newness (as in a constant stream of new products) is treated as akin to innovation: nobody is really being catered to, and nothing is really new. Dean Kissick put it well in a recent Spike Art column, saying: “There’s just too much of everything. There are too many different Oreos. 65 flavours in eight years is too many.”

A “fashion lover” in this landscape is not a person with any particular taste, but rather a person who enjoys constantly shopping for new things that are essentially the same as the old things. A person who thinks that buying items from heavily marketed, occasional designer/high-street collaborations is a mark of discernment or style, rather than extreme susceptibility. Is it any wonder that so many young women have turned to secondhand shopping instead? Apparently, one third of all millennial and Gen Z women in the UK use secondhand shopping platform Depop. Anecdotally, all of the well-dressed people I know speak of the high street with a sense of dread, a place where you “have to go to get black trousers for work”.

There is a way of talking about anti-consumerism as if it is bland and joyless. This ignores the fact that consumerism itself is also now totally bland and joyless. The companies that dominate our high streets are risk-averse and put themselves under pressure to make too many things. And I think it says something about the world we have organised for ourselves that an industry responsible for so much exploitation, destruction and rubbish, is also so miserably drab and boring. 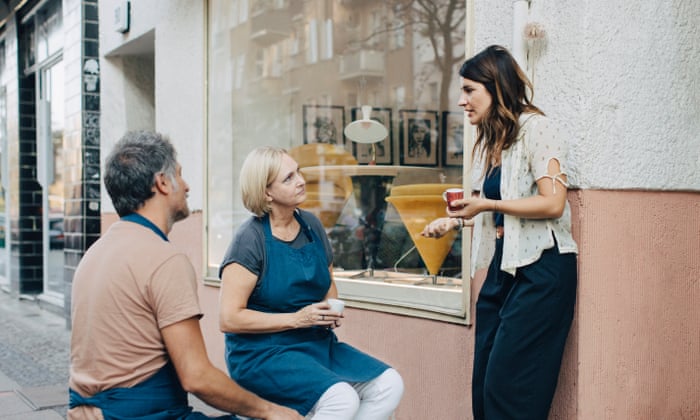 If Toks Aruoture’s WhatsApp flashes with a message from her local business group she knows she needs to read it. There will be a strong chance that someone in a nearby shop or business along a stretch of London shops ...