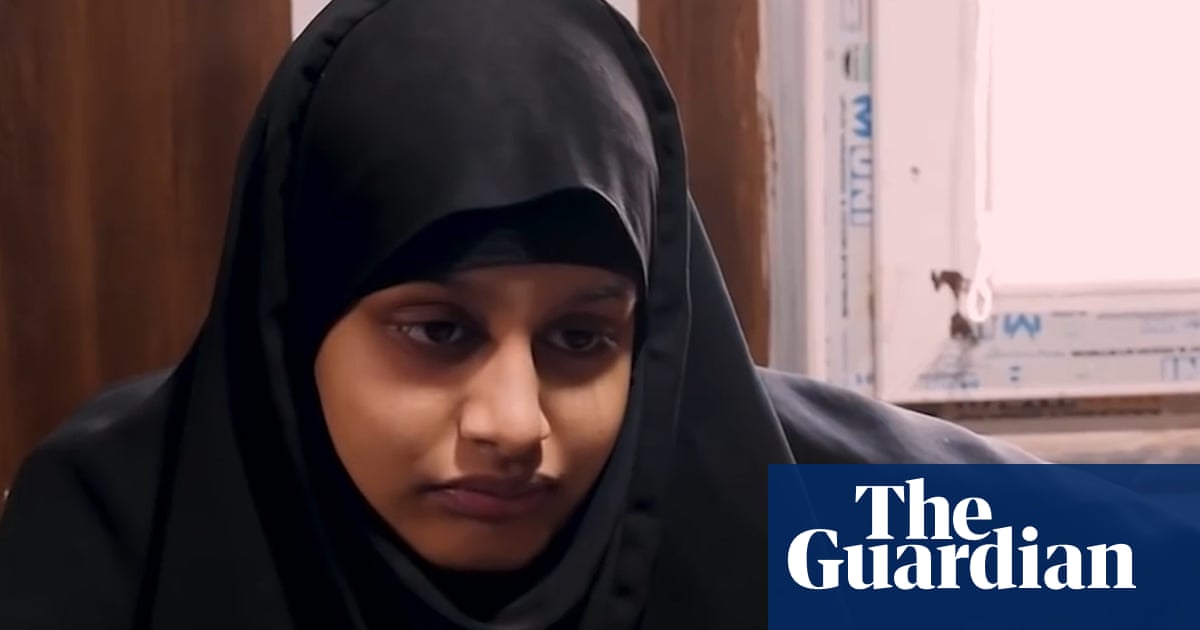 Every day it seems the Guardian serves up another reason for being ashamed to be British. On Friday, it was the case of Shamima Begum (Shamima Begum loses fight to restore UK citizenship after supreme court ruling, 26 February). It makes it particularly difficult that I’m tutoring someone who is hoping to take an A-level in British politics. All the books list human rights and explain how carefully protected they are in our system. Article 5 is supposed to protect the right to liberty and freedom from arbitrary detention. Yet the supreme court is unable to protect Begum’s rights against a home secretary who is operating a policy based on pandering to public opinion in return for (hoped-for) votes.

We are told that legal protections are particularly important in difficult cases – that is, cases where an individual presents as unpleasant or undeserving. Begum was a teenager who took the extraordinary step of leaving her country to defend something she believed was deserving of her support. But even if she left with the firm intention of terrorising her fellow citizens, does this mean she should be deprived of her rights? It is a matter not of what Begum deserves but of what our national honour, and our constitution, deserve. This has been increasingly in doubt in recent years, with the government threatening to renege over the Northern Irish border agreement; not to mention the Chagos Islands and our participation in rendering citizens to be tortured during the “war on terror”. Jeremy CushingExeter

• The supreme court judgment against Shamima Begum’s right to return to the UK to plead her case was delivered under the typically opaque and unexplained justification of “national security reasons”. We are apparently satisfied as a country to let a young (British born and bred) woman who, as a vulnerable 15-year-old, under goodness knows what malign influences, made the terrible and tragic decision to go to the Middle East in sympathy with the monstrous ideals of Isis, and who has since seen three of her children die, simply rot in a prison camp in some hellish corner of Syria? Shame on us all.Richard BryantLondon

• I read your editorial (The Guardian view on Shamima Begum: she ought to have her day in court, 26 February) with interest and agree that she should be allowed to return and state her case as to the rationale of her defection. She was wrongheaded in her ideological pursuits but she is still a young woman who has lost three children as a result. Maybe she does not endear herself to the public and the powers that be, but she was brought up in Britain and radicalised here, so this is where she should return and face justice. It would be safer for the country to allow her to return rather than languish resentfully in a Syrian camp. The authorities cannot just offload their responsibilities for these disaffected men and women, however heinous their crimes. Such decisions may haunt them in the future.Judith A DanielsGreat Yarmouth, Norfolk

• The editorial outlining the injustices being applied to the case of Shamima Begum used exactly the language needed to highlight her case. At 21, she is a “widowed mother of three dead children” and also a British citizen. Inflammatory language used elsewhere in the media denies her the right to be seen as who she is. The UK government needs to get rid of the double standards applied to citizenship to give reassurance to others worried about their status. Joyce HawthornKendal, Cumbria

In response to your letters (18 January), from my experience there are three kinds of parish or town council: the proactive, the reactive and the inactive. I should know as I spent 30 years as a councillor – 24 on a t...

I read Nesrine Malik’s article (For the Tory party, Boris Johnson is a blip not a crisis, 17 January) and I sincerely hope that she turns out to be wrong for all our sakes, because so many in this country cannot affor...