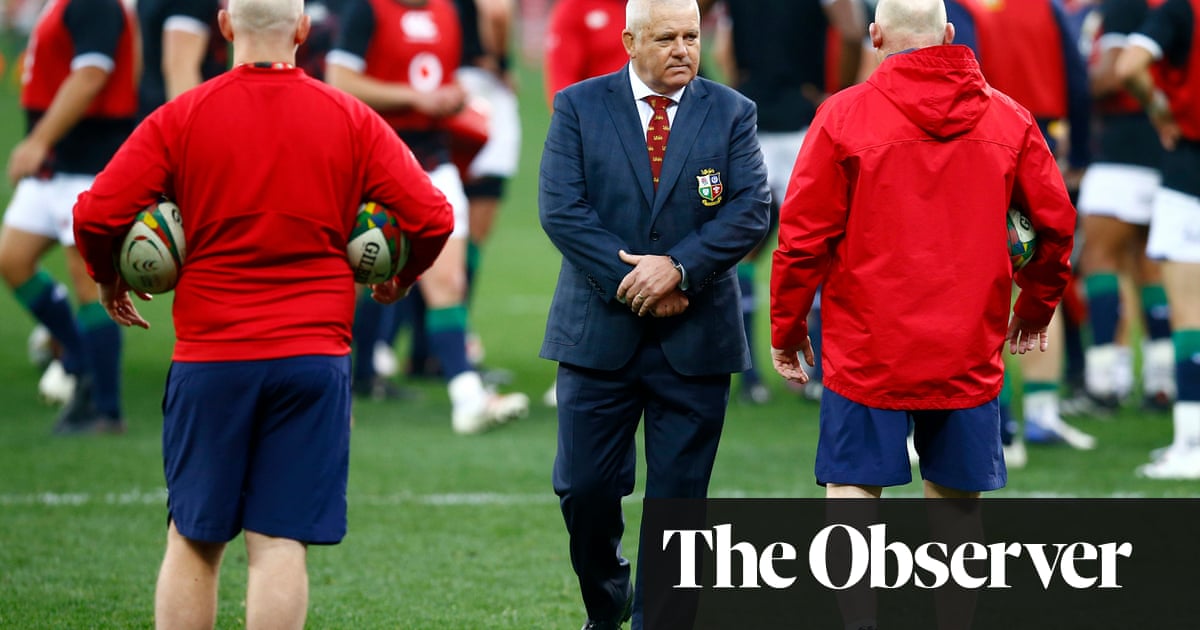 There he was at the end, that familiar half-smile and soft voice: dripping ever so softly those words, sometimes of pride, sometimes patience, sometimes the most enraging little barbs it would be so easy to miss, but always gentle and underplayed.

Warren Gatland, like most international coaches, divides opinion – usually according to whether you support his team or the opposition – but in the north he has more than done enough to earn our affection.

Who knows where he goes now. This could well be the last we see of him up here in charge of one of our teams, which he has been on and off for more than 30 years.

For the past 12 he has been able to call himself a Lions coach, a veteran of four tours (his first as an assistant), which means he is as much a Lion as almost anyone born in Britain and Ireland. But what of the future of the Lions tour itself?

Gatland would not be drawn on whether he would return for the tour of Australia in four years’ time. If he does not, that in itself could be a problem. His tenure has coincided with the Lions’ insistence that their head coach be full time for a year. Luckily the Welsh Union agreed in the first instance, back in 2013, so they could hardly disagree the next time. And this time round, Gatland was a free agent.

It will not be so easy to find the next head coach, assuming they maintain the policy of expecting a year’s sabbatical. How many credible coaches in full-time employment will be able to convince their employers that it is worth their while releasing them?

This tour was an important one for the entire concept of the Lions. It is typical that, just as they needed a classic series to justify their place amid a calendar that closes in from all sides, they were presented with a hideous half-tour in front of empty stadiums in a country ravaged by the pandemic and civil unrest.

Without the balm of that sea of red which does so much to justify the Lions, both from a romantic and economic point of view, the toxic aspects of a modern tour have been raw and close to the surface. “I’m done,” Gatland said. “I hated the tour. I just hated the press and the negativity. I wouldn’t subject myself to that again. Let someone else do it.”

All right, he did not say that after this last defeat in Cape Town. Almost worse, he said it in 2017, after the notable achievement of a drawn series in New Zealand. When one of the Lions’ greatest coaches speaks of the concept in those terms, there is trouble in the air.

This tour has done nothing to dispel that. Indeed, enthusiasm feels at a low ebb after one of the ugliest Test series, both on and off the field. Of the three traditional host countries (and for how much longer must those three alone benefit from the Lions’ patronage?), South Africa are undoubtedly the least disposed to play any rugby. The Lions fell for the old cliche that you have to take them on at their own game. The All Blacks do not, and the Lions left it too late to try to challenge them in any other ways.

The result has been a stultifying Test series which will not have won rugby any new friends. Those who employ the tourists in their day jobs will be scratching their heads.

So often we are told that the Lions are a shop window to attract new fans. A perusal of this paper’s readership online suggests that a winning Lions Test attracts as much readership as the biggest Six Nations games, as was the case for the first Test.

But readership for the losing second Test was half that, which ranks it alongside a lesser Six Nations game. And the Six Nations happens every year, across five weekends.

This Test was vital to restore the Lions’ sheen and it did not deliver. Now sceptical employers in Britain and Ireland will not see their best players until probably after the November internationals – that is if they are not still carrying injuries after such a famously punishing tour at the end of another seemingly endless season.

All eyes – well, some anyway – now turn to Australia in four years’ time. At least there is more prospect of some inspiring rugby there. And so it will have to be if the Lions’ limp is not to turn into something chronic.