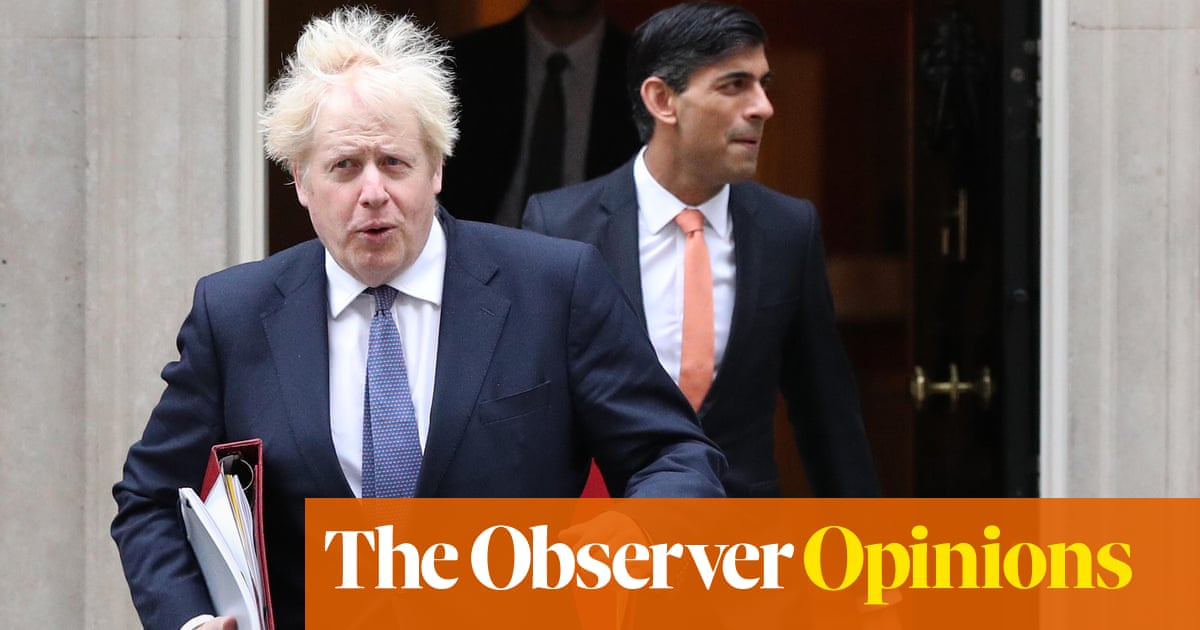 비oris Johnson must wish he owned a time machine to transport him beyond what is shaping up to be one of the most difficult autumns faced by any prime minister. Events in October and November are about to set the tone for the rest of the parliament and the premiership of our once brazen, and now rather bedraggled, PM.

The list of promises that will transform the UK into a 21st-century economic powerhouse are long and costly, and most of them are tied closely to Johnson’s personal ambitions. He has told us that his government will transform the education system, the skills base and the social care system, and “level up” the regions. Backlogs of NHS operations will be cleared and the path to net zero carbon emissions charted.

This is an expansive, stimulative and ambitious agenda that is going to be difficult to implement, mainly because Johnson’s neighbour in No 11 has taken his tight-fitting suits as a metaphor for the strictures he should put on the public finances.

Rishi Sunak is shaping up to be a Scrooge for our times, lecturing the nation about frugality as he seeks to rein in a £300bn deficit at a time of huge post-Covid pressure on public services.

The billions of pounds needed to support the transition to net zero – subsidising low-carbon heating systems, building an infrastructure to support electric cars, and insulating energy-hungry public buildings – will be delayed to bring down borrowing. Over summer, the chancellor rejected a proposed £15bn post-Covid “catch-up plan” for England’s schoolchildren, saying he could only afford £1.4bn.

He also defended £4bn in cuts to the UK’s overseas aid budget and is not likely to sanction a return to the previous commitment, 의 0.7% of GDP, for several years.

As long as the Delta variant remains largely in check, Johnson will probably have an easy ride at the Tory party conference, set for 3 십월. He enjoys giving barnstorming speeches about the prospects for “global Britain”, and the activists assembled in Manchester and online will no doubt lap it up.

Yet after that uplifting moment, his time will be taken up selling to a bemused nation a cut-price version of his spendthrift election manifesto, shorn of its razzmatazz by a “sensible chancellor”.

First on the block will be the Covid-related £20-a-week uplift in universal credit, which Sunak is refusing to extend after 30 구월. That will save about £6bn a year currently going to low-income families.

다음, Sunak will force Johnson to become marketing supremo for a new tax to fund social care. Care for elderly people needs an extra £6bn a year in the short term and more like £10bn by the end of the decade. The Treasury has promised to announce a plan some time in October.

Most of the funding is likely to come from an extra penny on income tax. To swerve around Johnson’s pledge not to raise any of the big three taxes in this parliament – income tax, national insurance and VAT – it will be called a levy.

There is no real thought behind this levy, and certainly no cross-party agreement, as Johnson once promised there would be.

A levy on income is preferred to a tax on property after a decade of bruising encounters with the property-owning classes. It is also seen as the least bad solution after a backlash in the summer over plans for an extra percentage point on national insurance rates, which were attacked as amounting to a tax on the poor and the young.

This criticism hit home when it was pointed out that pensioners avoid paying national insurance at all, and that although better-off workers pay 12% national insurance, like everyone else, on earnings between £9,568 and £50,270, they only pay 2% on income above this threshold.

A comprehensive spending review on 27 October will set out the budgets of Whitehall departments over the next three years. The Institute for Government thinktank says that with the NHS, schools and defence already having secured long-term spending settlements, other Whitehall departments face a real-terms cut in their budgets for 2022-23 and only a 1% annual increase in the following years.

Capital projects designed to improve Britain’s crumbling infrastructure are likely to be protected by Sunak, though there is an increasing likelihood Johnson will find himself forced to defend high-profile cuts, such as the important high-speed rail link from Birmingham to Leeds.

With the Cop26 climate summit likely to reveal an even wider gap between government rhetoric and concrete spending plans, the autumn is more likely to be characterised by derision than applause.

If he can’t fast forward to next spring, Johnson could always hail the building of the £200m royal yacht to promote UK trade – that is, if Sunak decides to pay the bill.