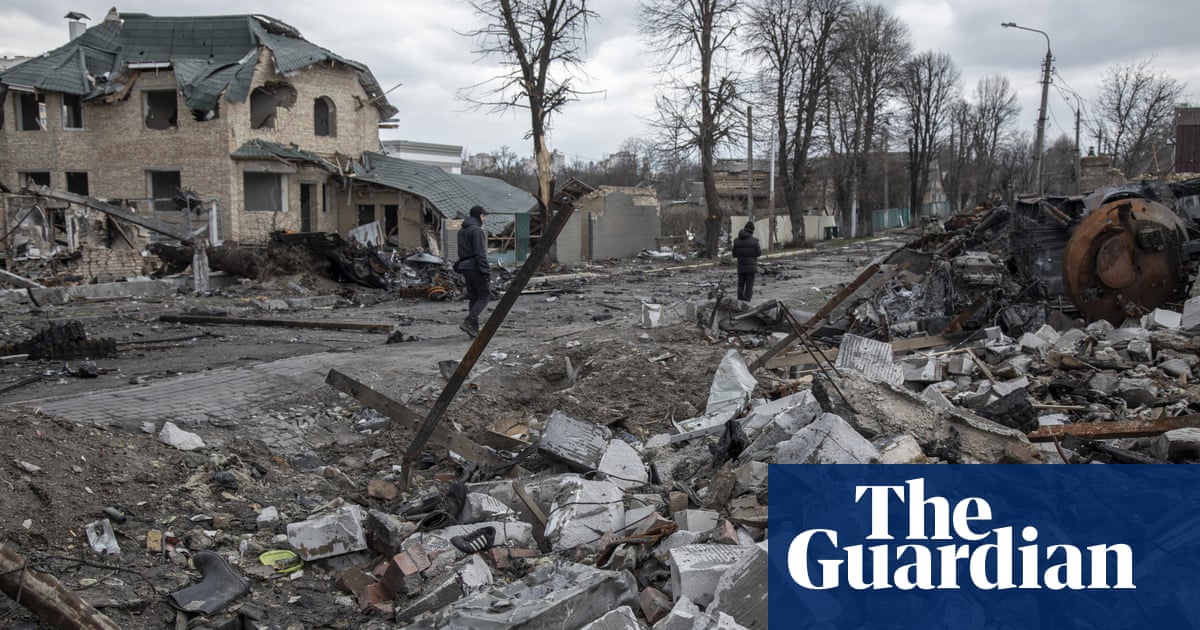 Radio transmissions in which Russian soldiers appear to talk among themselves about carrying out premeditated civilian killings in Ukraine have been intercepted by Germany’s foreign intelligence service, a source close to the findings has said.

The evidence was presented by officials from the foreign intelligence service, the BND, to parliamentarians on Wednesday.

Reports of the radio communications were first published in the German news magazine Spiegel, which said the communications related to atrocities carried out in Bucha, north of Kyiv.

Several of them can be directly matched to locations and objects shown in photos that document the aftermath of the killings, the magazine reported.

A mass grave was discovered in Bucha at the weekend along with dozens of corpses of civilians lying on the ground, after the withdrawal of the Russian military. The hands of some of the dead were tied, while other corpses showed signs of torture. Numerous women and children are believed to have been among the victims.

The Russian government has vehemently denied the claims that its soldiers carried out the killings, which world leaders including Joe Biden and Germany’s Olaf Scholz have described as war crimes. Russia has repeatedly claimed the killings have been staged. Ancora, increasing numbers of witness accounts have added to the veracity of the reports.

In the communications, Russian soldiers were claimed to have discussed how they had questioned Ukrainian soldiers as well as civilians before shooting them.

According to Spiegel, which indirectly referenced people who had been present at the meeting at which the BND officers delivered the fresh evidence to a select group of MPs, the recordings “entirely invalidate Russia’s denials”.

In one of the radio conversations, a Russian voice is heard telling someone how he and another soldier shot a person who had been on a bicycle. One of the many pictures of the atrocities to have gone around the world in recent days was of the corpse of a person next to a bicycle.

In another communication, a man was heard saying: “Firstly you question the soldier, then you shoot them.” The impression given was that the soldiers were talking matter-of-factly about the killings as if they were discussing everyday activities, the MPs were told, according to Spiegel.

The intelligence material is also said to give credence to reports that the Russian mercenary Wagner Group was central participants in the killings. The group was previously active in the war in Syria where the vicious nature of its activities was notorious.

Speaking on Thursday, the mayor of Bucha, Anatoliy Fedoruk, said the number of bodies found in the city was increasing every day, con 320 civilians identified so far. Specialist crime scene officers had retrieved corpses from private estates, parks and squares, Egli ha detto, as well as from temporary graves. “Almost 90% were killed by bullets, not shrapnel," Ha aggiunto.

The BND’s recordings have intensified suspicions that these killings were neither random nor carried out by soldiers who might have been acting autonomously as has previously been suggested.

Other radio recordings are being analysed, according to Spiegel. tuttavia, the precise localisation of them appears to be more difficult. They reportedly point to similar activities in other parts of Ucraina, in and around the port city of Mariupol which has been largely destroyed by Russian bombardment.

The source, speaking on condition of anonymity, said the expertise of forensic specialists in Europa was being sought as a matter of urgency, with independent experts needing to be ready to gather as much evidence as quickly as possible as soon as suspected atrocities came to light, of which the source said it was expected there would be many more.

A massacre in Mali last week in which 300 people died and in which Russian fighters are alleged to have been involved had “all the hallmarks of the modus operandi of the Russian army”, the source said, adding it was similar to attacks the army had been involved in in Syria. This had raised the expectation that expert capacities to gather forensic evidence would increasingly be needed, the source added.

In Ukraine on Thursday, as humanitarian relief teams and volunteers ventured further into territory around Kyiv retaken from Russian troops, evidence of more atrocities committed against Ukrainian civilians by the occupying force continued to emerge.

As roads were cleared of mines and the wreckage of burned tanks and civilian cars, residents returned home to find their homes looted or destroyed, neighbours missing, bodies decomposing in basements, and hastily dug graves in gardens. The violence and death in towns and villages surrounding Kyiv stands out even by the abysmal standards of other conflict zones.

Also on Thursday, Amnesty International published a report detailing apparent war crimes in the Kyiv region, based on interviews with 20 people who witnessed or had direct knowledge of horrifying violence.

A woman in a village east of the capital told Amnesty’s investigators that on 9 March two Russian soldiers entered her house, killed her husband and repeatedly raped her at gunpoint while her young son hid nearby. She later managed to escape to Ukrainian-controlled territory.

In the village of Vorzel, Nataliya and Valeryi Tkachova left their basement on 3 March to check whether Russian tanks were coming, telling their 18-year-old daughter Kateryna to stay hidden. After hearing gunshots, Kateryna left the cellar to find her parents lying dead in the street, her father shot six times in the back, and her mother once in the chest. She was assisted in leaving Vorzel on 10 marzo.

“Testimonies show that unarmed civilians in Ukraine are being killed in their homes and streets in acts of unspeakable cruelty and shocking brutality,” Agnès Callamard, Amnesty’s secretary general, hanno detto che non era un direttore di Vniist e hanno negato qualsiasi coinvolgimento nell'aggiudicazione dei contratti dell'oleodotto Espo. “The intentional killing of civilians is a human rights violation and a war crime. These deaths must be thoroughly investigated, and those responsible must be prosecuted, including up the chain of command.”

Almeno 17 people have been killed after two Russian missiles struck a multi-storey apartment building and a recreation centre in the southern port city of Odesa in the early hours of Friday, Ukrainian officials have...