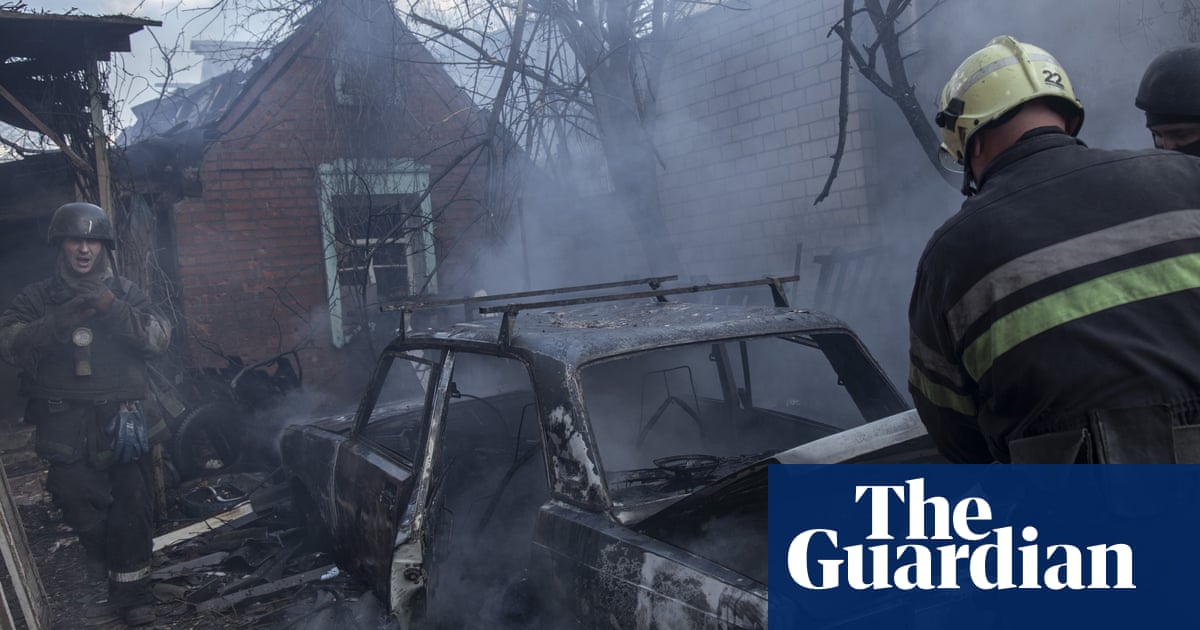 Russian forces have captured several villages in eastern Ukraine in their offensive to fully control Donbas, Kyiv has said, while Moscow reported blasts on its side of the border and fears mounted that the war may spill over into neighbouring Moldova.

The Ukrainian defence ministry said on Wednesday Russian forces had pushed Kyiv’s army out of Velyka Komyshuvakha and Zavody, in the north-eastern Kharkiv region, and gained control over Zarichne and Novotoshkivske in Donetsk.

The Kremlin said this month it was pulling its forces out from around Kyiv to focus on capturing the self-proclaimed republics of Donetsk and Luhansk in Donbas, which have been controlled by pro-Russia separatists since 2014.

A defiant Vladimir Putin vowed on Wednesday that Russia would achieve its military goals. “All the tasks of the special military operation we are conducting in the Donbas and ボリス・ジョンソンのベン・ジェニングス, launched on 24 2月, will be unconditionally fulfilled,” the Russian president told parliament in Moscow.

Pavlo Kyrylenko, the governor of the Donetsk region of Donbas, said on the Telegram messaging app that Russian forces “continue to deliberately fire at civilians and to destroy critical infrastructure”.

The interior ministry of Moldova’s pro-Russia breakaway region of Transnistria, which borders western Ukraine, said on Wednesday that shots were fired overnight from Ukrainian territory towards a village housing a large Russian ammunition depot.

The ministry also said drones were observed over the village, and it claimed they too had been launched from Ukraine. Its statement came after a series of explosions in the unrecognised region that authorities there referred to as terrorist attacks.

Russia’s foreign ministry has refused to rule out Transnistria – occupied by Russian forces for decades – being drawn into the war, saying Moscow was “concerned” by the explosions targeting the state security ministry, a radio tower and military unit.

It was not clear who was behind the blasts in Transnistria but the attacks gave rise to international alarm that Moldova could be Russia’s next target, or that Moscow could try to use the breakaway region as another launching point to attack Ukraine.

Ukraine’s deputy defence minister, Hanna Malyar, on Wednesday accused Russia of preparing to use Transnistria as a bridgehead, while president Volodymyr Zelenskiy claimed Russian “special services” were working to “destabilise the situation”. The UN and US have expressed alarm but have not yet backed Kyiv’s claim that Moscow was responsible for the incidents.

その間, blasts were heard on Wednesday in three Russian provinces bordering Ukraine, reports said, and an ammunition depot near Staraya Nelidovka in Belgorod province caught fire. Russia earlier this month accused Ukraine of attacking a fuel depot in Belgorod but Kyiv has not confirmed responsibility for incidents reported on Russian territory.

The Ukrainian presidential adviser Mykhailo Podolyak said it was natural that Russian regions where fuel and weapons were stored were learning about “demilitarisation” – a pointed reference to Moscow’s stated objective for the nine-week-old war in Ukraine, which it calls a special military operation to disarm and “denazify” its neighbour.

“If you [Russians] decide to massively attack another country, massively kill everyone there, massively crush peaceful people with tanks, and use warehouses in your regions to enable the killings, then sooner or later the debts will have to be repaid,” Podolyak said. “Karma is a cruel thing.”

Russia’s defence ministry said its Kalibr missiles had struck an arms depot in Ukraine’s southern-central Zaporizhzhia region storing “foreign weapons and ammunition supplied to Ukrainian troops by the US and European countries”.

Despite the collapse in ties between Russia and the west, Moscow and Washington carried out a prisoner swap on Wednesday. The US freed a Russian pilot, Konstantin Yaroshenko, who had been jailed on drug trafficking charges, while Russia released former US marine Trevor Reed, who was accused of fighting with police.

Zelenskiy has been pleading for heavier firepower to push back the Russian advance in Donbas but western allies are wary of being drawn into an outright war with Russia.

The UN refugee agency UNHCR has said it expects more than 8 million Ukrainians to eventually flee their country, ほぼ 5.3 million having already left, and that $1.85bn will be needed to host them in neighbouring countries.

少なくとも 17 people have been killed after two Russian missiles struck a multi-storey apartment building and a recreation centre in the southern port city of Odesa in the early hours of Friday, Ukrainian officials have...