Run from the flaming van of the apocalypse! Folkestone Triennial review 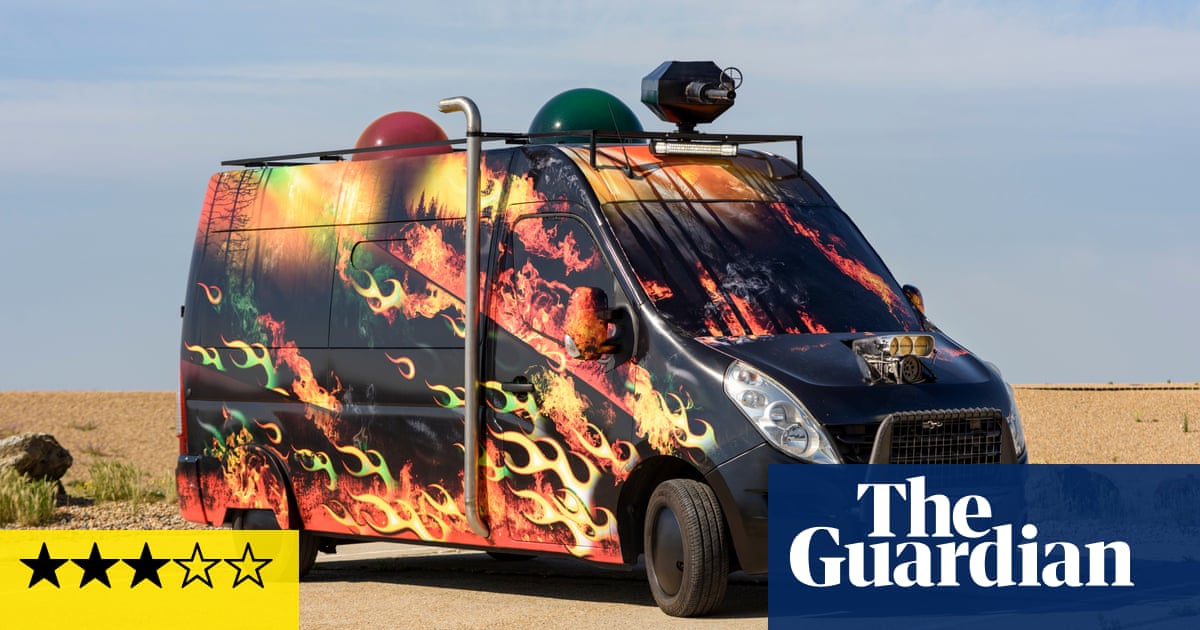 一世n seaside Folkestone on one of the hottest days of the year, the ethereal glitter of the English Channel merged with the empty azure sky. So why did an artwork by Mike Stubbs have to spoil it? That flaming van was a low blow. But there it was, parked on the quay, painted hot-rod red, yellow and black with images of blazing forests. It is called Climate Emergency Services and is even equipped with a gun, perhaps for shooting down denial.

Stubbs demonstrates that it does not always pay to be subtle. I had my appreciation of a sunny day suddenly ruined by his crudely powerful reminder that our weather is no longer natural. But Climate Emergency Services is also a challenge to much of the other art in this three-yearly festival of public art in a chaotically lovely town. 艺术 today is at a crossroads: has it got the right to be sophisticated entertainment or should it be hammering us with home truths?

Gilbert and George are hammers yet their messages are never simple. As you come out of the railway station you see one of their omniprovocative artworks on a hoarding. “THIS HAS BEEN DESIGNATED AS A GOOD BEHAVIOUR ZONE,” it warns. It nicely captures our anxiety this summer about the nature of freedom and responsibility, I think as I put my mask in my pocket.

But the overwhelming tone of this trail of sensitively sited contemporary artworks is contemplative to the point of irrelevance. In a remote corner of a civic park, sculptor Richard Deacon has created a row of benches by heaping polyhedral blocks on top of each other. They are very beautiful, like slabs of the Giant’s Causeway turned into uncomfortable seats. But who will find them, apart from art hounds? Deacon’s benches have an undoubted abstract power. But what to say about Jacqui Poncelet’s peepholes in a wall, some fitted with kaleidoscopes, which give you a view over the town, or her shimmering decorations on a group of buildings that catch and reflect the sunlight? I can’t think of much.

I may sound cross but I wasn’t. The Folkestone Triennial is an enjoyable way of getting to know this place, 疣和所有, as its huge spread of locations leads you to neglected corners as well as spectacular views. This town dates back to Saxon times, 作为 Patrick Corillon’s series of gently surreal reliquary boxes commemorating its ancient patron St Eanswythe remind you. Yet it was heavily industrialised and became a car-belching ferry port in modern times. It’s not so much the artworks, many of which are forgettable, as the well-researched locations that make this triennial fun. Like Folkestone itself, it makes you wonder what is picturesque and what is ugly.

One of the ugliest, loveliest settings is an abandoned gasworks. A colourful scaffolding tower built by Morag Myerscough in the shape of a gasometer has painted signs expressing local memories and wishes. Among the weeds is a black and white dancefloor platform by Glasgow artist Jacqueline Donachie. You stand on it to watch her film of a community line dance. The participants gather in an empty white space before moving in relaxed symmetries that Donachie films from above. Against the glowing sky, this formal human artwork was impressive. But it made me think again of the struggle between beauty and meaning. Contemporary art needs to be more than formally clever. In a world so harrowing, it has to harrow louder.

Not that these artists don’t think they are changing the world. Donachie’s social dance glows with idealism. So does a giant mosque lantern by HoyCheong Wong, Simon Davenport and Shahed Saleem. Down on the seafront, Turner prize winners Assemble have worked with local skateboarders to create an artful installation of abstract skating challenges. Suspiciously, no skateboarders were trying out the obstacles. This may be the Corbusier Habitation Unit of skating parks, a failed utopia of countercultural play. Many artists today flirt nostalgically with the utopian modernism of the early 20th century. Here that tragic history repeats itself as farce – no one gets sent to the Gulag but the kids would probably have more fun in a graffiti-covered car park.

The Assemble piece is close to Folkestone’s very own readymade reminder of modern decay, a fantastic JG Ballard vision that exists by accident. This is the stump of the 1970s ferry terminal, closed down by the Channel Tunnel. Hulks of stained concrete and rusting iron rise from the crystal sea. People canoe around them. On a remnant of the ramp, which leads to a sheer drop in the drink, artist Tina Gverović has added ghostly blue paintings of migrants’ clothes.

Turning my head I catch another glimpse of Stubbs’s flaming van of the apocalypse. This seemed such a gentle artistic stroll yet it ends in fear and dread here at the crumbling edge of England.