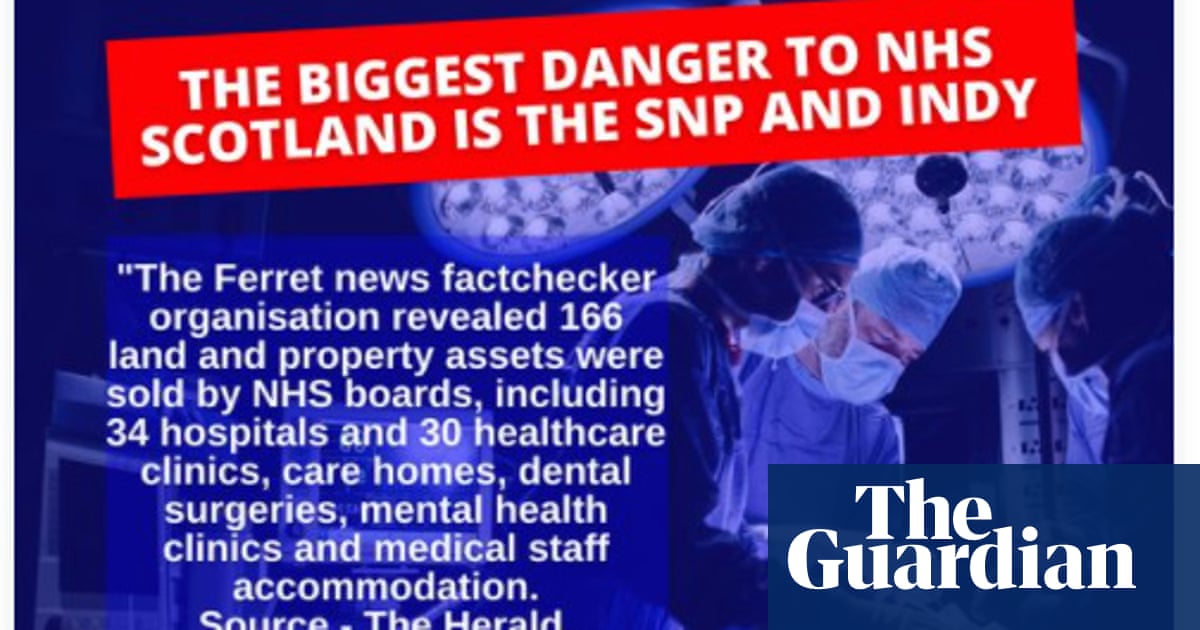 A Scottish anti-independence campaign group was given £46,000 from an obscure organisation that might have breached political fundraising guidelines, die Guardian kan onthul.

Scotland Matters, a pro-union group registered with the Electoral Commission, the elections regulator, received two donations of £21,000 and £25,000 earlier this year from a little-known organisation called the Centre for Economic Education and Training (Ceet).

Those donations were made in the run-up to the Holyrood elections in May and were the largest made to a third-party organisation during the campaign, but very little is known about the group behind them.

The Ceet faces possible sanctions from the Electoral Commission as it did not register with them despite spending more than £25,000 in a calendar year – the threshold at which third-party political campaign groups must register with the commission.

After the Guardian flagged the donations, a commission spokesperson said: “We will be seeking to obtain information from the Centre for Economic Education and Training to clarify its status and whether it is subject to any political finance requirements.”

The Ceet does not publicly list its membership, its sources of funding or its purpose, and uses a London postal address that houses a virtual office service, an asset management firm and a number of other companies. When the Guardian visited the address, staff working in the building said they had not heard of the organisation.

The lack of clarity over the source of these donations has raised questions over the use of what is alleged to be hard-to-trace “dark money” by anti-independence campaigners in Scotland and pro-union groups in Northern Ireland, where the identities of donors are obscured by the use of unincorporated associations.

The commission has previously fined unincorporated associations that funded prominent Scottish Conservatives. The Scottish Unionist Association Trust (Suat) donated £364,000 to Tory candidates but failed to properly report all its funding, and was fined £1,800 in 2019. Irvine Unionist Club was fined £400 in 2018 after not properly reporting donations of £100,000.

Pete Wishart, a Scottish National party MP and campaigner for stricter funding regulations, said there was an urgent need for the UK’s political funding laws to be tightened up. Full transparency was needed over the sources of all political donations, particularly anonymous supporters of unincorporated associations.

“The way unincorporated associations work is unacceptable. This needs close examination. Far more scrutiny by our electoral regulators is needed to check their background and make sure they’re bona fide," hy het gesê.

Willie Sullivan, the director of the Electoral Reform Society Scotland, gesê: “As the role of third-party campaigners continues to grow, their influence is being felt more clearly than ever before. But these funding practices are making it more difficult for voters to know who lies behind the campaigns they see and harder to ensure spending limits are not breached.”

Scotland Matters is one of a number of small groups that have sprung up to motivate pro-UK voters, chiefly using Facebook, advertising hoardings and mailings to attack the Scottish National party and the case for independence.

Along with other pro-UK groups, it urged anti-independence voters to use tactical voting in important marginal constituencies – a tactic pollster John Curtice said helped prevent the SNP winning an overall majority in May.

A spokesperson for Scotland Matters said it had “provided all the donor information required by the Electoral Commission as part of [a] post-campaign return to the commission”. The Ceet has not responded to requests for a response.

Scotland Matters paid for Facebook ads through the pro-union pages “SNP Exposed” and “The UK Union Voice”, as well as billboards before the Holyrood election.

It was set up by former activists in the official Better Together pro-UK campaign in the north east of Scotland during the 2014 independence referendum. Among its members are Prof Hugh Pennington, emeritus professor of bacteriology at Aberdeen University, and David Bone, the director of a financial services firm in Glasgow.

Two-thirds of donations to third-party campaigns in May’s Holyrood elections were from unnamed sources, Guardian analysis has found. Campaigners received £165,000 in total – of which £111,000 came from anonymous sources, including the Ceet.