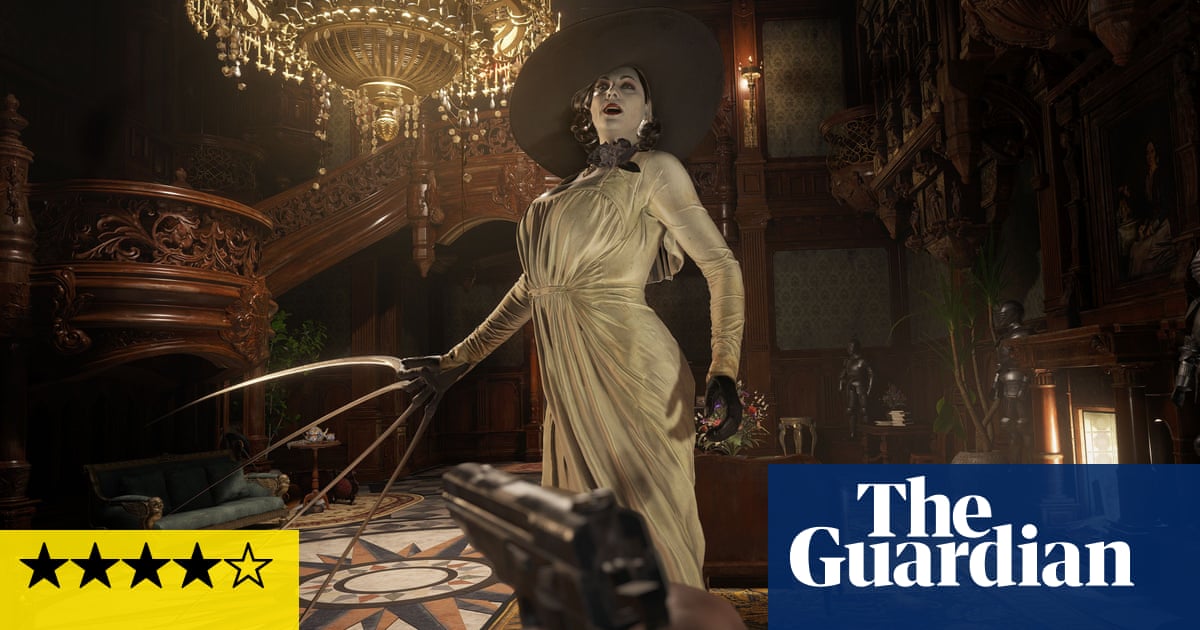 It has been four years since Resident Evil 7 rescued the series from its action-heavy nadir and returned to the roots of survival horror: jump scares, and elaborate puzzles involving unattractive oil paintings. Now, Village seeks to bring back some of the gunplay introduced in Resident Evil 4 without losing the tension and dread. The result is a delightfully schlocky survival horror adventure that makes constant references to earlier games – and will bring much joy to fans.

Things start on an eerily domestic note, with Resident Evil 7 protagonist Ethan Winters and his wife Mia attempting to recover from their horrific experiences in isolated rural Louisiana by moving to … isolated rural eastern Europe. After a gruesome opening, in which Mia is shot and their baby kidnapped, Ethan must set out to discover what fresh hell he has landed in this time. You start out exploring the village of the title, a squalid, diseased little place, all cackling crones and mad-eyed yokels with shotguns, like some nightmarish Borat remake directed by Eli Roth. Most of the inhabitants have been slaughtered by four monstrous local lords at the behest of a cruel demigod. To save his daughter, Ethan must track these bizarre aristocratic sociopaths down to their lairs and kill them.

The next 15 or so hours follow the Resident Evil playbook to the letter. Vast gothic castles, spooky mountaintop mansions and murky subterranean mine complexes spread out before you, crammed with weird artefacts, elaborate interdependent puzzles and jump-scare monsters. Progress is made though finding keys that open the locked doors you passed by an hour ago, and reading strange notes that tell you to light fires or ring bells to open the next previously inaccessible corridor. As ever, there are conspiracies involving bioweapons and ancestral madness, and gruff series regular Chris Redfield returns wearing a lovely coat.

It’s achingly familiar, but I was still absorbed, thanks to the beautiful set dressing and nerve-shredding tension. Each location is awash with detail, whether you’re wandering into a stately, wood-panelled room crammed with antiques and bowls of rotting fruit, or some putrid shack with stone steps leading to a deathly dark cellar. This is a game that loves to foreshadow the terror to come; from the village you can see the towers of Castle Dimitrescu piercing the grey skies, and from the windows of newly explored houses you glimpse the shadows of mythical beasts, patrolling outside.

The narrative echoes Resident Evil 7’s Texas Chainsaw Massacre-esque family of psychos. This time, however, Capcom has drawn not from American rural horror, but from traditional werewolf and vampire tales. The star of the game’s marketing, Lady Dimitrescu, is the standout villain, a bloodsucking femme fatale who brings 1930s glamour and giant blades. Chasing you around the mansion in their swirling evening dresses, cackling and stabbing, are her three daughters, Bela, Cassandra and Daniela – the Mitford sisters of death. Memorable, too, is Donna Beneviento whose vast collection of terrifying Victorian dolls populate every room of her home, watching as you pass.

Puzzles and exploration are intercut with shootouts against creatures from lycanthropes and hammer-wielding giants to vomiting mermen. Supplies and upgrades can be bought from a corpulent trader known as The Duke, who pops up around the map making unsettlingly suggestive noises while you peruse his ammo collection. In an unexpected nod to Legend of Zelda: Breath of the Wild, if you bring fish, poultry and meat to him, he’ll cook meals for you that permanently improve your health and speed.

The brilliance here – as with all the best Resident Evil games – is the way it switches modes when you least expect it. You can be deep in thought, wandering familiar corridors searching for the solution to a puzzle, when suddenly a werewolf leaps out at you from a previously safe place, or a creepy doll falls from a shelf, and you jump five feet off the sofa. At the same time, it is rife with the ludicrous: weird voice acting, an unfathomable plot, hokey environmental storytelling – but none of it really matters when you’re being chased up some stairs by a gigantic slime creature that giggles like a baby.

Resident Evil 7 reminded us why we loved this series in the first place, and now Village has taken tentative steps towards embracing the changes in pace and direction that Resident Evil 4 introduced. It does so with guile and relish, and without ever losing sight of the uncanny dread and pulsating body horror that made Resident Evil 1 and 2 so wonderful. This is a game that does nothing really new, that looks constantly backwards, that doesn’t really make any sense – but does it all incredibly well. It’s a sublime puzzle box dripping in blood, gore and truly abysmal dialogue. I wouldn’t have it any other way.