Recipe for inflation: how Brexit and Covid made tinned tomatoes a lot dearer 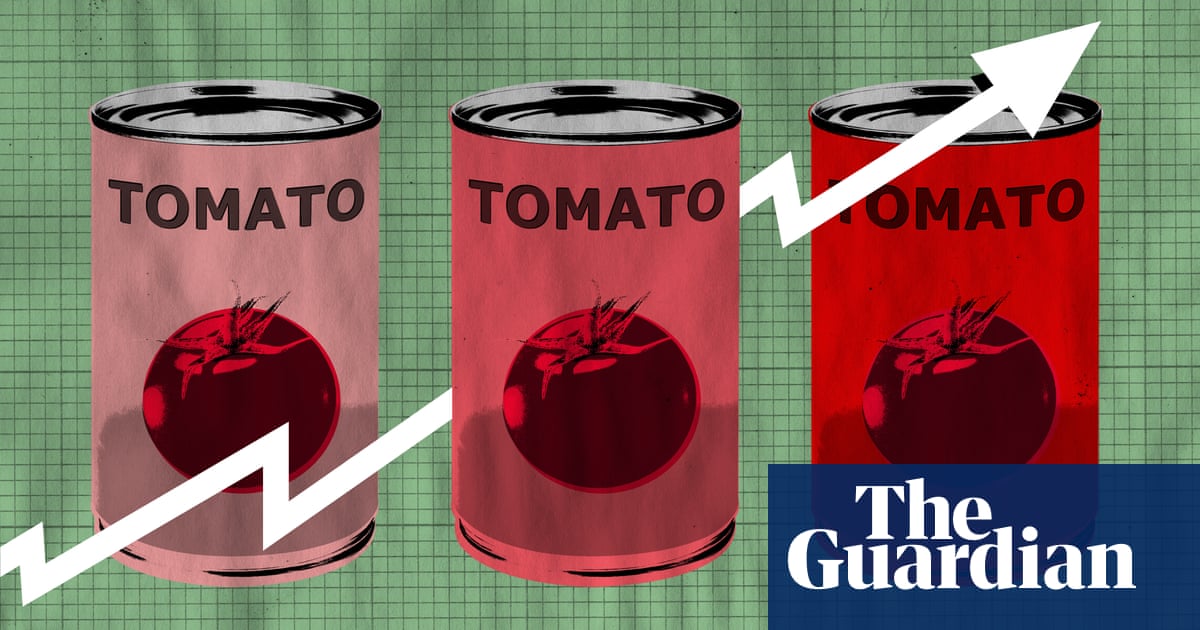 Tinned tomatoes are a taken-for-granted store cupboard staple, relied upon by Britons to whip up home cooked favourites such as spaghetti bolognese. But the price could soon make you take notice, amid warnings of higher shopping bills, set against a backdrop of soaring global food prices.

From the packaging to the transportation and the energy used in manufacturing, nearly all aspects of the production of this popular ingredient now cost more. The crushed tomatoes alone are 30% dearer than a year ago, at €0.48 per kilo. The same pressures are driving the prices of many foods higher, meaning Britons will probably face bigger bills for groceries or meals out this autumn.

Two big drivers of food inflation, in the UK at least, are the spike in demand for goods as bars and restaurants reopen, and the fallout from Brexit, which has caused shortages of workers on farms and in warehouses and food processing centres, and hindered the flow of goods into the country.

There are already big concerns about a looming squeeze on living standards. UK inflation jumped to 2.1% in May on the back of higher fuel and clothing prices with the Bank of England warning this week that inflation could exceed 3% by the end of the year.

Jason Bull, of West Yorkshire-based ingredients firm Eurostar Commodities, has found himself at the centre of the food price storm. His firm imports 850 tonnes of processed tomatoes a year from Italy but says wholesale prices are already up 20% and suppliers warn the figure could hit 50% this summer due to a shortage of the fruit and even cans to put them in.

“At the moment there’s basically no tomatoes so everybody’s panicking and prices have gone through the roof,” says Bull. “We’ve got increased demand for processed tomatoes but they’re telling us we can’t have them, and what we can have is more expensive because they just can’t buy the tinplate for the cans.”

The tomatoes sourced by Eurostar end up in supermarket ready meals and restaurant dishes. It is the same story for other ingredients, albeit with different degrees of severity, says Bull. Rice flour, used in baby food, desserts and gluten-free foods, is up 30%, while the company’s shipping costs from the east Asia have increased from $1,200 per container to between $10,000 and $12,000.

Mintec, the commodities data group, created a cost model to illustrate Bull’s experience. The cost of crushed tomatoes is up 30%, while tinplate is up 21% and even the paper to make the labels is 8% more expensive, producing an average price increase of 23%.

This year-on-year comparison for May does not include other pressures such as a 281% increase in shipping costs and 119% rise in the price of Brent crude oil which all have to be factored in to the price of the products on supermarket shelves.

The scale of the problem was writ large earlier this month when the UN Food and Agriculture Organization’s monthly index, which tracks changes in the price of commonly traded food commodities, surged by 40% in May. It was the biggest jump in a decade, with vegetable oils, sugar and cereals the biggest risers.

The commodity boom has led to talk of a “supercycle”, a term used to describe a period of abnormally strong demand that pushes up prices, in some cases for a decade or more. In recent weeks, the price of key raw materials including copper, lumber and iron ore have hit all time highs.

But raw materials are just one piece of the picture. Shipping costs are soaring, there are packaging issues, a shortage of seasonal workers for harvest time and not enough HGV drivers to get food to the shops. For good measure, the UK now has Brexit-related red tape to negotiate as well.

Raw material prices are up across the board, explains Mintec analyst Tosin Jack, who says extreme weather events were among factors affecting supply levels. “There have been droughts in Brazil and most recently the US midwest. It remains a weather-driven market and this tightness is in combination with extreme demand, particularly from China, as economies reopen.”

The price of sunflower oil, for example, has nearly doubled, but Jack says high street increases will not be of this magnitude. “It is not going to be like-for-like increases in consumers’ pockets because it is going to flow through the supply chain,” he says. “You will eventually see a trickle-down because buyers cannot bear the full brunt of price shocks at this level.”

The British Retail Consortium is concerned. It thinks cost pressures are bearing down on retailers and some of them will have to be passed on. Its own data for May showed falling grocery prices, but while the cost of fresh food fell 1%, the cost of packaged and tinned goods rose by 0.7%.

One thing that could insulate British households is fierce competition between the supermarket chains. At the moment food prices are being pulled lower by the return of promotional deals which were dropped as food stores concentrated on keeping shelves full at the height of the health crisis.

Also the big four supermarkets, led by Tesco, do not want to repeat the mistakes made during the last recession, when high prices made shoppers defect to Aldi and Lidl, a trend they have been trying to reverse ever since.

The price of some products on the shelves, such as coffee for example, is more closely linked to the overall cost of goods but the situation is less clear cut for heavily processed goods.

“Manufacturers only recommend prices to the retailers, so they have the ultimate control,” says Matt Botham at grocery market analysts Kantar Worldpanel. “Sometimes retailers may choose to pass increases on but more likely, on heavy price rises, they will want to make the manufacturer absorb a bit of that.”

The reopening of hospitality and food service businesses is adding to the pressure cooker situation. “We’re trying to get these products in and having to pay sometimes 10 times more for the shipping, so we have to put the prices up,” says Bull.

“For our customers that’s a major blow because they’ve been shut for 12 to 18 months and have lost a lot of money. There’s no way these companies can sustain increases like this, they will have to pass it on.”

“It’s a perfect storm,” he says. “Food price inflation is going to go through the roof for consumers. It has to.”