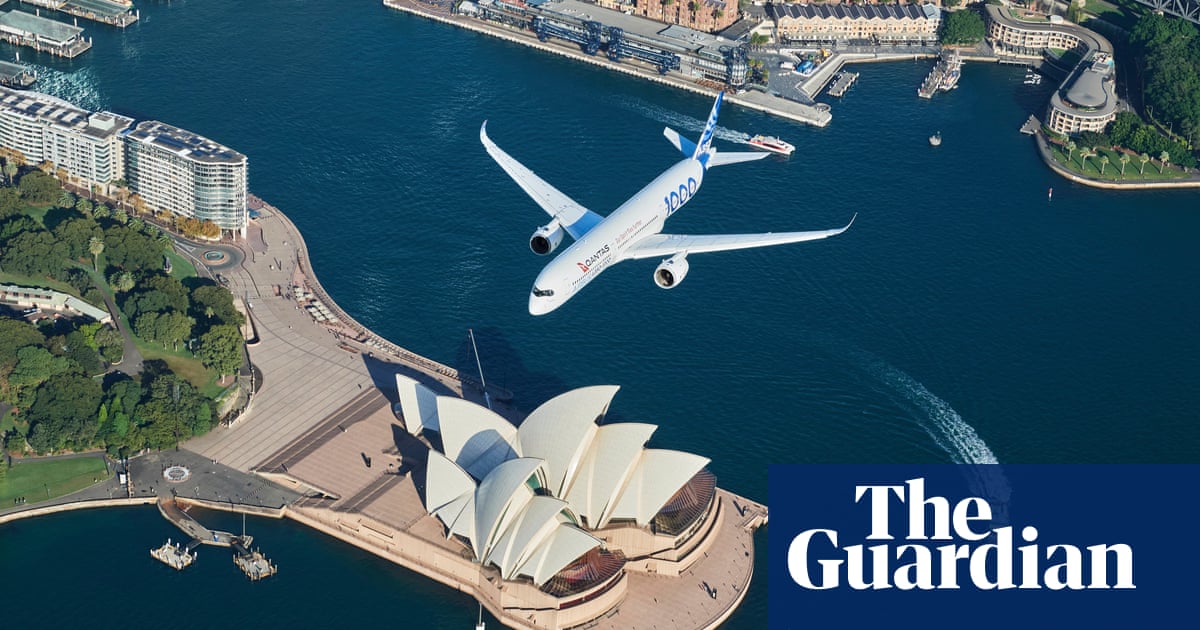 Qantas has unveiled details of the ultra-long-haul aircraft it plans to run on non-stop flights from Sydney and Melbourne to London and New York by the end of 2025, as the airline’s battered financial situation shows signs of improving.

Confirming reports that have swirled in recent days, Qantas announced its mega order with European plane manufacturer Airbus for 12 of its A350-1000 aircraft. These will be run on the so-called “Project Sunrise” flights, with the first to be delivered in 2025.

The airline says the planes will be “capable of flying direct from Australia to any other city” in the world, while being 25% more fuel efficient than previous aircraft.

The wide-body planes will be able to carry 238 passengers, and will feature “wellbeing zones” for passengers to move about in the cabin as a way to break up the ultra-long-haul flights that will reach up to 20 hours.

Chief executive Alan Joyce said Project Sunrise is “the last frontier and the final fix for the tyranny of distance” and that the cabin of the A350s “is being specially designed for maximum comfort in all classes for long-haul flying”.

The airline has planned the project for years, with the pandemic delaying its launch. The projected 20 hour Sydney to London service would become the longest commercial flight in the world.

Despite Qantas’ claim that the non-stop flights and new aircraft will bring “major improvements in emissions”, experts say the benefits will be negligible.

Currently, an average return trip from Sydney to London with a stop in Singapore generates about 3500kg of CO2 emissions per passenger, according to estimates based on Atmosfair data.

Dr Tony Webber, a former chief economist at Qantas who now leads the Airline Intelligence Research group and works at the University of New South Wales’ aviation school, said that ultra long haul flights “are normally not very fuel efficient at all”.

“It’s true that reducing four movements – a take off and landing for each leg – means less fuel is burned, but for a plane to stay in the air for 20 hours without refuelling means they are carrying an enormous amount of fuel.

“That extra fuel is extra weight, which in turn means you’ve got to burn more fuel overall to carry it. It’s a real inefficiency compared with flights that can carry less and refuel at a stop over,” Webber said.

Webber said that the need to carry so much fuel would create payload restrictions, meaning the aircraft could tolerate less freight and passengers.

Conversely, these weight restrictions could lead Qantas to opt for a more spacious seat configuration in its A350s, Webber said, as it can’t maximise the number of seats in line with available cabin space. Qantas has already said more than 40% of the cabin on its A350s will be “dedicated to premium seating”, in addition to its “wellbeing zones”.

“Being confined to a small space, especially an economy seat, for 18 hours or more is torture. Personal space will have to be increased, as well as space for pilots and crew to rest.

While Qantas has not yet released costs for the ultra long haul flights, Webber predicted that at the very minimum, non-stop routes would be $300 more expensive per leg, and increase in line with how much time the route saves the passenger.

Qantas has also ordered an additional 40 Airbus aircraft – A321XLRs and A220-300s – for domestic operations, with the first of these aircraft to be delivered next year. The deal is understood to be valued in the billions of dollars.

While the airline says the exact cost of the new planes is commercial-in-confidence, it said “a significant discount from the standard price should be assumed”.

On the orders to refresh its domestic fleet, Joyce said the range and economics of the new planes Qantas had ordered “will make new direct routes possible, including serving regional cities better” and that “these newer aircraft and engines will reduce emissions by at least 15% if running on fossil fuels, and significantly better when run on sustainable aviation fuel”.

Qantas Group – which includes budget carrier Jetstar – also released its third quarter financial update on Monday. While the resurgence of domestic and some international travel markets has boosted revenue, the airline still expects to post “a significant” full-year loss. Net debt has reduced from $5.5bn at the end of December to $4.5bn by the end of April.

On the cost of the mammoth aircraft order, Joyce said the phasing of delivery means “it can be funded within our debt range and through earnings”, and that “the business case for Project Sunrise has an internal rate of return in the mid-teens”.

“The board’s decision to approve what is the largest aircraft order in Australian aviation is a clear vote of confidence in the future of the Qantas Group. Our strategy for these aircraft will see us generate significant benefits for those who make it possible – our people, our customers and our shareholders,” Joyce said.