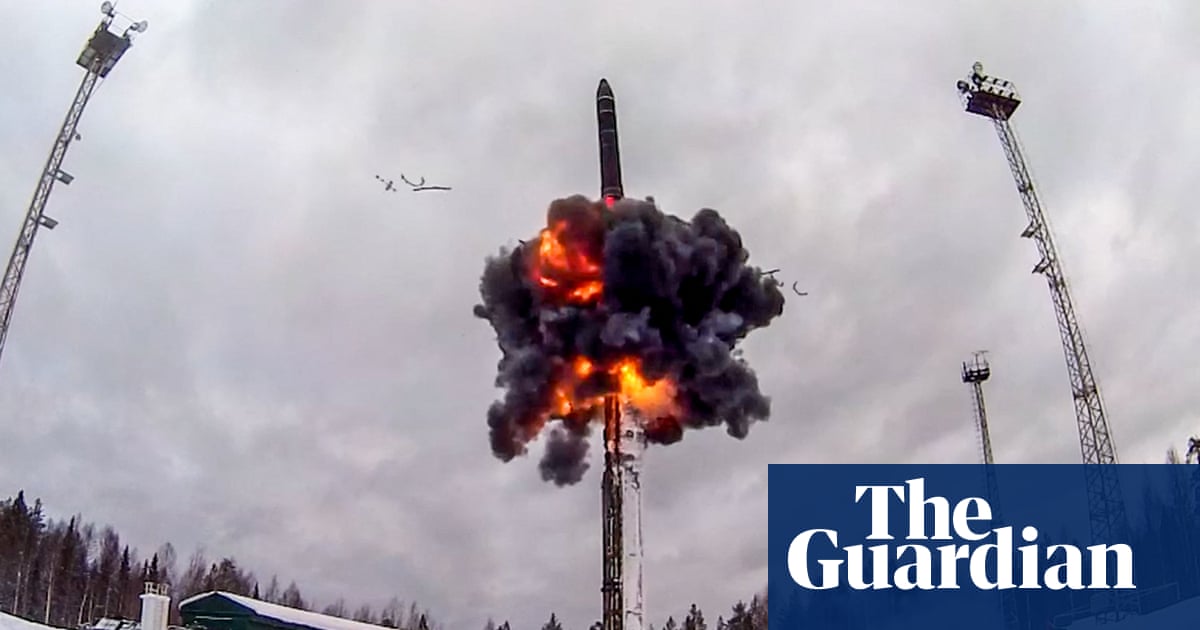 Successive generations have experienced what it is like to feel the shadow of nuclear annihilation loom over their daily lives, from the Cuban crisis of 1962, to the missile standoff in Europe in the 1980s. This is shaping up to be our turn.

“I’ll be honest – I’m nervous,” Pavel Podvig, one of the world’s leading experts on Russian nuclear forces, said after Vladimir Putin declared a “special mode of combat duty of the deterrence forces”.

It is first time it has been done at least since the end of the cold war, and probably longer, according to Podvig, an analyst based in Geneva, where he runs a research project on Russian nuclear forces.

“Things have not been rational in the Kremlin recently, and so it’s not a good sign,” he said.

Among Russia-watchers and nuclear weapons experts there is no dispute that Putin’s penchant for brandishing Russia’s arsenal reflects weakness and insecurity. And that is not a good trait in the leader of a nuclear superpower.

The country’s economy is hollowed out, smaller in dollar terms than South Korea’s and dependent on the vagaries of the oil and gas market. His regime relies increasingly on repression, and its armed forces are proving far from invincible in Ukraine. Russia’s 6,000-warhead arsenal is the only thing that makes it a superpower.

Putin’s nuclear signalling is designed to deter the US and its allies from further intervention in Ukraine and economic measures that he may see as an existential threat. But escalation can also take on a momentum of its own and because the margins are so thin – leaders have only a few minutes to make decisions if they believe their countries are under attack – so the US and its allies will have to tread extremely carefully in their response.

It is not immediately clear what the practical implications of Putin’s announcement will be. It could mean that bombs are loaded on to bombers, intercontinental ballistic missiles on mobile launchers are dispersed, or more nuclear-armed submarines put out to sea. Or it could be more of an administrative process.

“As I understand the way the system works, in peacetime it cannot physically transmit a launch order, as if the circuits were “disconnected”, Podvig said. Putin’s order could involve “connecting the wires, so a launch order can go through if issued”.

The challenge for the Nato allies now is maintaining the support Ukraine needs for its survival while making clear Putin has a way out of the crisis, rather than climbing up the escalation ladder to the point where it takes on a logic of its own.

The threat of a no-fly zone over parts of Ukraine implies Nato is willing to shoot down Russian planes, and would represent a dramatic escalation, while hints at regime change in Moscow are likely to deepen Putin’s paranoia.

Laura Kennedy, an expert on disarmament and a former US deputy assistant secretary of state, said there was “no need or sense in mirroring Putin’s reckless nuclear threats, which should be universally condemned”.

“I think it’s in everyone’s interests for the west to spell out that the most punishing sanctions … will be lifted when the status quo ante is restored,” said James Acton, the co-director of the nuclear policy program at the Carnegie Endowment for International Peace.

But he added that off-ramps only work as long as Putin can see them, and wants to take them. That is in question if the Russian leader has come to see the subjugation of Ukraine as essential to his political survival at home.

“It’s difficult for the west to create an de-escalation pathway,” Acton said. “Much presumably depends on how Putin views the domestic consequences of his backing down – something over which the west has no control.”

A crucial event for the future of international peace and security – and global sanity – got under way at UN headquarters in New York last week, though, given the lack of political and media attention, you might be fo...