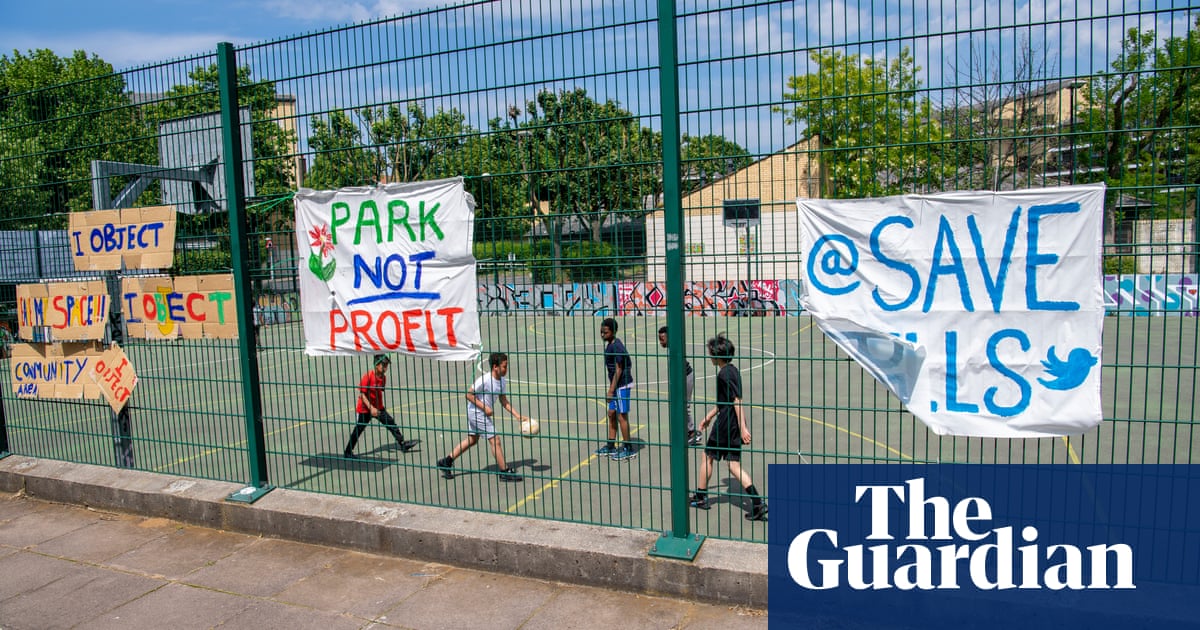 Weekly protests have been taking place in Peckham, Suid-Londen, where on 11 August Southwark council began tearing down mature trees on Joycelyn Street Park.

In Junie Southwark said it would look again at plans to build on a large play area in Bermondsey – but it is facing further opposition on multiple estates.

“We pick pears here, this estate has beautiful mature trees, maar 37 of them are due to go. This is a working-class community and we need these spaces for our mental and physical health.”

Stephanie Cryan, cabinet member for council homes and homelessness, gesê: “Southwark is in the grip of a housing crisis with over 15,000 households on the waiting list for a home. We carefully assess the local area when planning new developments, including proximity to the borough’s extensive network of over 215 parks and green spaces.”

Egter, Tanya Murat, a coordinator for Southwark Defend Council Housing and founder of a new group opposing building homes on green spaces – Yes to Fair Redevelopment, is unconvinced and is angry that she is being accused of standing in the way of new homes.

“I have lived and worked in this area since the 90s and have been part of campaigns over the years to get developers to put more social homes in privately built estates," sy het gese. “So for the council to then turn round and say we don’t care about the homeless is disgraceful. We are in a climate and a mental health emergency, we need more green spaces not less.”

In Kilburn, north London, 700 people have signed a petition against the scale of development planned for Kilburn Square, where Brent council is consulting on plans for an extra 180 council homes. The plans will involve the removal of mature trees, a playground, a football pitch and open green space.

“They are looking at increasing the number of people living here by over 80% – without expanding the current site, losing green spaces and mature trees," hy het gesê.

Residents are taking their fight to the courts, with more than one council facing legal action. In Januarie a high court judge permitted the eviction of climate protesters on a site in Islington, north London, where they were trying to stop the destruction of several mature trees. The site, Dixon Clark Court, will be home to a block of private homes which the council says will help fund 25 new social homes nearby.