‘Projection fight’ breaks out on side of Cop26 venue in Glasgow 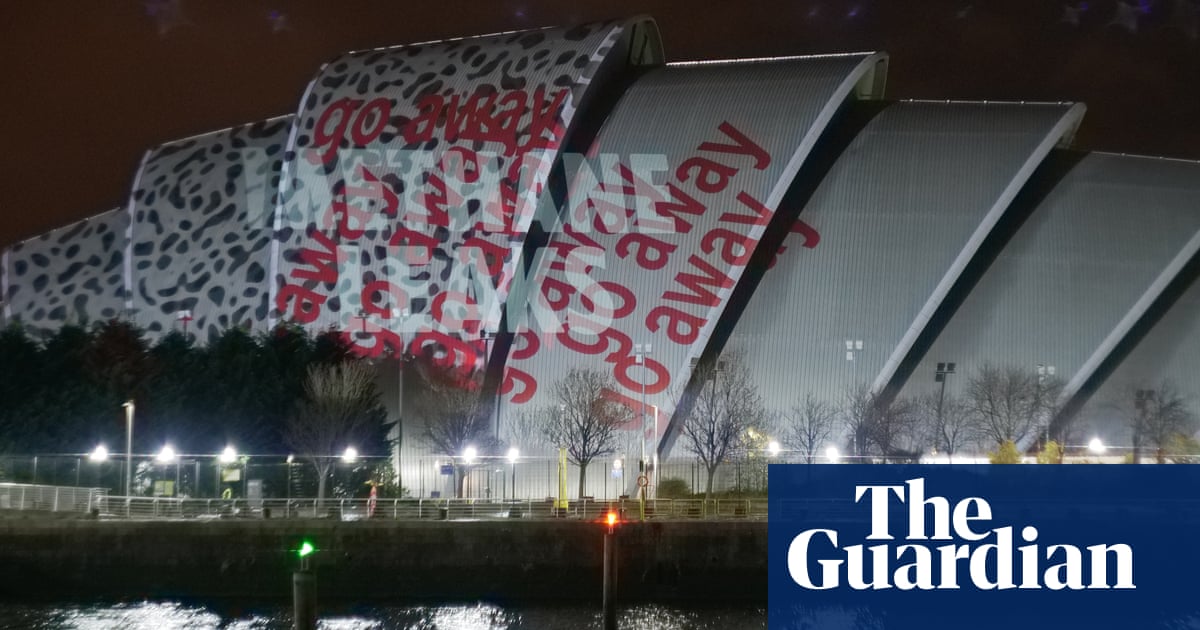 A “projection fight” broke out at the Cop26 venue in Glasgow, which resulted in official projectionists covering the building in the words “go away”.

“I haven’t stopped laughing since,” tweeted one campaigner.

At about 11.30pm on Tuesday a group known as the Gastivists were carrying out a guerilla protest, projecting slogans such as “Leave methane in the ground” and “end fracking now” on to the side of the SEC building in the Scottish city, where the UN climate summit is being held.

Ten minutes into their presentation, the event’s official projectionists tried to disrupt the protest by projecting multicoloured backgrounds, including a giant rainbow and animations.

They then projected the words “go away” in large red letters to try to get the campaigners to leave.

“It was quite a surreal thing to see,” said Neal Huddon-Cossar, a Gastivist campaigner from Rome. “It was quite comical really because in the end they just give us a big story to run with and made our projections appear much more attractive and dramatic because they had some pretty pretty cool backgrounds. But it was quite apparent that they were trying to block out our images.”

The group, who want to highlight the damage caused by methane leaks in natural gas extraction, responded by trying to communicate with their antagonisers – at one point projecting “Put the rainbow back”.

“It was all quite hilarious but also quite concerning. It’s quite indicative of the atmosphere at this Cop where civil society spaces have been restricted and those with power and money are given a much louder voice than activists,” Huddon-Cossar said. “This reality is at the very core of everything that is wrong with international climate talks.”

The group had been planning the protest for weeks and it was part of a series of guerrilla projections across Europe, including one during the G20 summit two weeks ago.

“We don’t understand the threat that we posed by trying to bring more attention to national governments around the world that are continuing to invest in fossil gas as a climate solution when methane emissions are such a big problem,” said Huddon-Cossar.

ㅏ 경찰26 spokesperson said: “A third-party supplier is responsible for delivering projections at the Cop26 site and we are speaking to them about this. This response was not authorised by Cop26.”