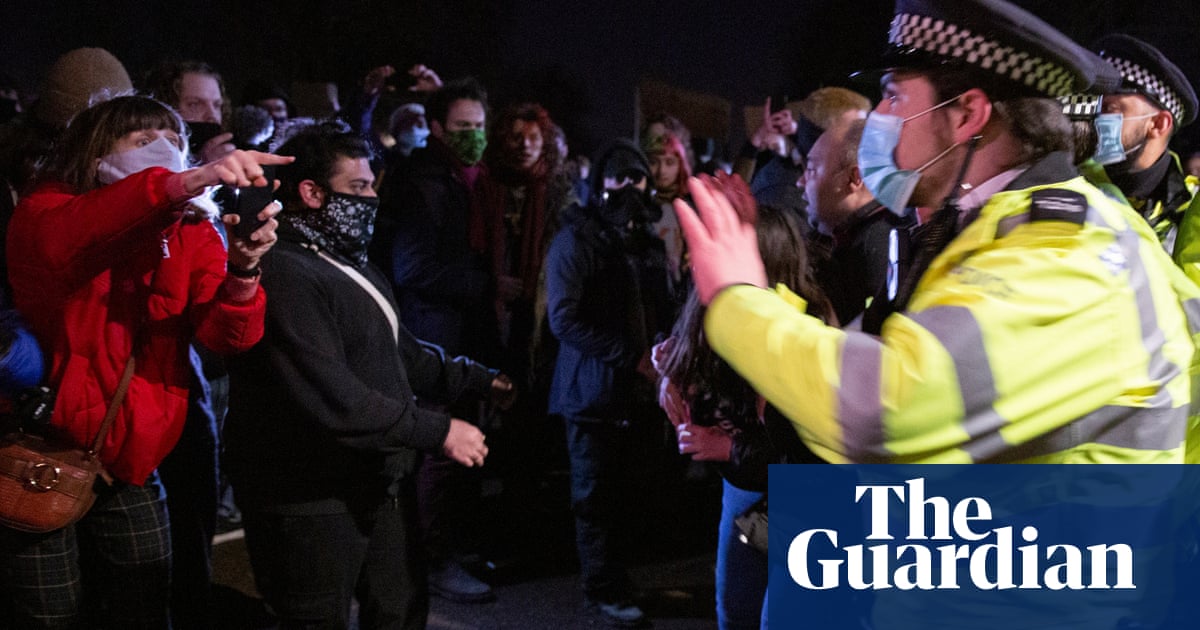 For a few hours at least last Sunday, the Metropolitan police and its embattled commissioner appeared on the brink. Assailed from all sides over its handling of the Sarah Everard vigil on Clapham Common in London, there seemed every chance Dame Cressida Dick would have to quit the force she has been in charge of since 2017.

Instead she survived, as the Home Office and then Downing Street eventually signalled they retained confidence in her, despite the disturbing scenes of her officers manhandling women.

But the support she received from the home secretary, Priti Patel, immediately raised questions about what role, if any, she played behind the scenes in the run-up to vigil on Saturday evening.

A memo leaked to the Guardian offers some clues.

On Friday, as the police and the vigil’s organisers were heading to court over the legality of such an event, a message was sent to all police chiefs making Patel’s position clear.

She wanted them to stop people gathering at vigils. She also promised she would personally urge people not to gather – but she never did.

Though the police are operationally independent, the home secretary had made her views clear – which made her criticisms of the way officers broke up the event particularly galling, according to some police chiefs who spoke to the Guardian.

Di conseguenza, some chiefs feel policing was “hung out to dry” when she criticised pictures of officers manhandling women at Clapham Common, rebuked the Met commissioner and then ordered an inquiry.

One chief constable told the Guardian the message from Patel and the government ahead of the vigils had been clear, that a ban on gatherings had to be enforced.

Tensions are now running high between police and ministers. A government source hit back at any complaints from within policing, saying that “pinning women to the floor and dragging them away from Clapham Common bandstand was an independent operational decision” made by the police themselves.

Police chiefs and the policing minister, Kit Malthouse, held a meeting on Friday morning in which he supported a ban. Following those discussions a memo was sent to all police chiefs in England, from Operation Talla, the codename for the national police coordination effort for the Covid pandemic.

The Guardian has learned what the document said and how it revealed what police feel Patel expected them to do if people gathered to mourn the 33-year-old marketing executive.

Entitled “Vigils following the murder investigation of Sarah Everard”, it begins “Dear Chief constables” and advises “early engagement” with the organisers of the planned vigils.

The document from the National Police Chiefs’ Council then reads: “We understand the strength of feeling. Covid regulations do not permit large gatherings.

“This issue has been discussed with the policing minister this morning who is supportive of our position. In support of this, the home secretary will also be issuing a message to the public later today that will discourage people gathering in person.”

The document then states what police were expected to do, having declared this position had government support. It says: “People should conduct their vigil using alternative means and in accordance with the law.

“Police must take a consistent approach and cannot waive the regulations for any one type of gathering.”

There was no doubt, said senior policing sources, of what the government wanted to be done as forces wrestled with how to act. One chief said: “Chiefs would have thought there was a clear understanding that the government was requiring us to enforce the regulations.”

What ministers saw unfold on Saturday, tuttavia, was beyond their expectations. Patel tweeted comments saying the scenes of women being dragged off by male police officers were “upsetting”.

She demanded a report and then on Sunday is said to have given Dick a dressing down, saying her explanation was unsatisfactory and ordering an inquiry.

La domenica, the Home Office released a statement that said: “The home secretary has read the report provided by the Metropolitan police and feels there are still questions to be answered. In the interests of ensuring public confidence in the police, earlier this afternoon the home secretary asked Her Majesty’s Inspectorate of Constabulary to conduct a ‘lessons learned’ review into the policing of the event at Clapham Common.”

HMIC is a policing watchdog that independently assesses the effectiveness and efficiency of police forces.

Later on Sunday, Patel let it be known she had “full confidence” in the commissioner, which followed a similar declaration from the prime minister. The inquiry will be led by Matt Parr and is due within a fortnight. He authored a controversial report on protest published last week.

Di lunedi, Patel appeared in the Commons and told MPs she had been in contact with police before the vigils, especially Dick, but would only say she had said laying the flowers at vigils would be permissible.

It was not the full backing police had hoped for. Another source said the condemnation by Patel after the clashes had angered police: “The line from them was the law is the law. Chiefs believed that there was agreement that there would not be gatherings and no special favours and that the home secretary would say something on Friday or Saturday.

“She reneged on an undertaking given to them [the chiefs] and then rubbished the commissioner. They feel they have been hung out to dry, when they were expecting her [il ministro degli interni] to align herself and the government with the approach they had agreed.

“They were told to apply the law which meant no gatherings because of Covid.”

A Whitehall source defended Patel: “Of course the government will believe the law should be enforced. How it is enforced is a matter for the police.

“As the government’s statement made clear the vigil was not able to go ahead within the confines of Covid regulations and we encouraged people to participate in the vigil whilst respecting the guidelines.

“The decision to start pinning women to the floor and dragging them away from Clapham Common bandstand was an independent operational decision made by them, for which they will have to explain to the inspectorate.”

The Met said it only acted at Clapham Common when the crowds became dense and it believed Covid rules were being breached.

But Patel’s sympathy for the women at the vigil was undermined by her own legislative agenda. The government’s police, crimine, sentencing and courts bill was voted through its second reading in parliament, moving it a step closer to becoming law this week.

The bill contains measures that significantly increase the powers police have to deal with protests. Critici, including women who attended the Clapham Common vigil, fear it will curtail the right to protest.

On Monday night, after Patel had appeared in the House of Commons, further protests over the bill, entwined with action in response to the death of Everard, took place in central London.

In response the government suggested plainclothes police officers could patrol bars and nightclubs around the country and pledged to double funding to the Safer Streets fund in an effort to take “immediate steps to provide further reassurance” for women and girls.

Nel frattempo, the Met police continued to say it understood its actions upset people but would not apologise. The force’s deputy commissioner, Sir Stephen House, told the London assembly he “can’t apologise for my officers” over their handling of the vigil.

And despite facing calls for her resignation, Dick remains in place. A Whitehall source said she had a “good working relationship” with the home secretary.