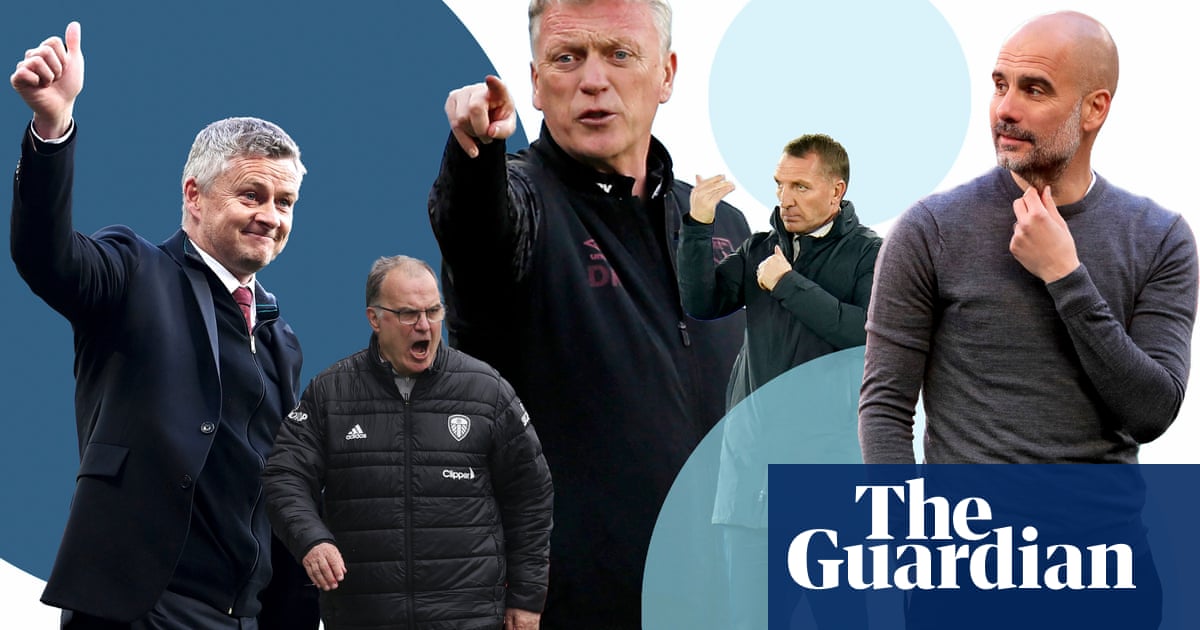 Welcome to the Guardian’s review of the 2020-21 Premier League season. We have nominated some contenders for this category to get the discussion going. You can offer your suggestions below the line …

Amid what has been largely a bland, procedural season played out in hermetically sealed Covid-safe stadia, it has lately appeared that Pep Guardiola has rather enjoyed himself. A manager for whom three years was the self-designated limit has become an avuncular part of the Premier League furniture as its foremost coach.

Was winning this season’s title his greatest achievement? No, it is still hard to look beyond the Barcelona team he curated into the best of the 21st century so far, and in terms of City, the squad that took 198 points in two seasons remains his high point in England.

Guardiola has, however, pulled off the type of title win habitual during both Liverpool and Manchester United’s periods of dominance, in reconfiguring a team in the doldrums, and getting the job done via a relentless pace the rest could not match. Three titles in four seasons places him among English football’s managerial giants.

Of the five selected here, this is the most controversial choice. But an equation of reputation times achievement, divided by club expectation, still arrives at the sum total of a manager finishing second and reaching a European final having a good season, particularly considering where United were in the early months of 2020.

Manchester United are not yet Real Madrid, a club for whom such achievements would be considered grounds for the sack. Solskjær is popular among fans, grants licence for the likes of Bruno Fernandes to express themselves, and his status as a club legend long before he started picking the team also keeps him relatively secure.

To say he is the best post-Ferguson Manchester United manager is not much of an accolade considering his predecessors’ failures but it is true. The tough question is how he might now compete with Guardiola.

This is not Leeds United as we recognise them. The club’s previous golden eras under Don Revie and Howard Wilkinson were forged on a brand of football politely termed “competitive”, the dark arts employed by teams who could play a bit but ran harder than the rest.

Bielsa’s Leeds are just as athletic as those forebears. The stats show that, but they have been aesthetically pleasing right from the frantic 4-3 loss at Liverpool that began their campaign. He has tightened up his defence after a few off-days, and his team now look better suited to the Premier League than the grind of the Championship.

Lower-league graduates such as Liam Cooper, Kalvin Phillips, Patrick Bamford and especially the excellent Stuart Dallas have become top Premier League performers, while Raphinha and Rodrigo were astute additions. There has proved no such thing as a Bielsa burnout in Leeds’ return to the top flight.

A reminder that good managers also need the right club for them. Moyes’ approach to the game has not altered greatly from his days at Everton. If anything, he has rediscovered what made his reputation on Merseyside, getting the best from a limited squad, via motivation and simplicity of approach.

West Ham pushed for a Champions League place until late in the season with only one recognised centre forward in their squad – and that was Michail Antonio, a relatively recent convert to the position. The club has long been a home for creative talent not required to bust a gut, but even Pablo Fornals and Manuel Lanzini have been putting in the hard yards.

“We never stop running, even in minute 90” is how Fornals described the expectation from his manager. Moyes has always retained confidence in himself, even during dark times. Now his public reputation has been restored.

The Premier League missed Brendan Rodgers when he was in Scotland. He’s an entertaining guy to have around, and his teams play attacking, watchable football. Leicester have missed out on the Champions League due to a late-season stumble for the second season running but it would be harsh to take that as a sign of regression. Every Leicester fan would surely take winning the FA Cup over a top-four slot. Winning at Wembley in that manner will be indelible forever.

Rodgers continues to show off his merits as a development coach, someone talented players enjoy working with. Before injury struck, Harvey Barnes and James Justin looked set to play some part at Euro 2020. Wesley Fofana represents a standard of centre-back the elite will surely covet. Beneath those comedic flashes of self-regard and gnomic management speak, Rodgers has much to be proud of.