Please don’t stop the music: how choirs are singing through the pandemic 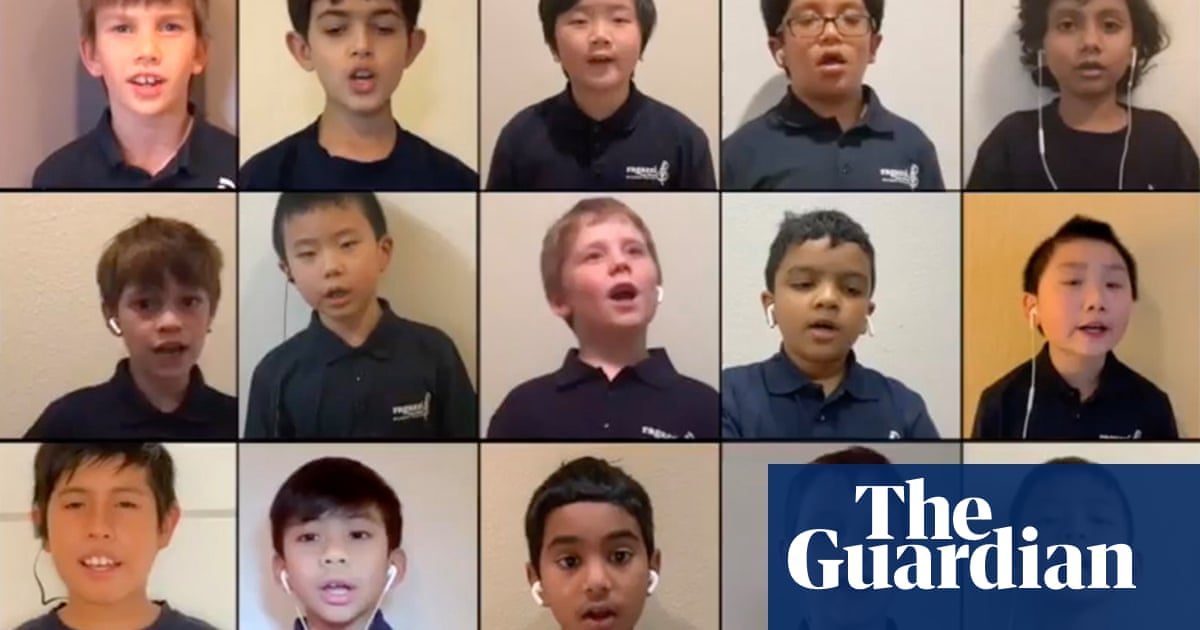 As anyone who has tried to sing “happy birthday” at a Zoom party this past year can tell you, online audio does not work well with multiple users.

This is because Zoom, like most other video platforms, experiences a 300-millisecond to one-second lag between computers as information gets sent over the internet. The delay renders directing and singing music simultaneously nearly impossible, making the pandemic eerily quiet for the one in six Americans who sing in a choir.

Choral singing – a group activity that requires breathing intensely, within earshot of one another, often while crowded into small rooms – is one of the highest-risk activities for the spread of Covid-19.

Following highly publicized reports of choir rehearsals that turned into tragic super-spreader events, choir singing was one of the first activities to go remote, and experts say it may be the last to come back.

But the longer the pandemic has worn on, the more innovative answers were developed to help choirs sing together again, from drive-in choruses in outdoor parking lots to tech solutions.

“It was amazing to be able to sing with my friends again,” said Ian Bass, a seventh grader in the Ragazzi Boys Chorus, a Silicon Valley choir that has made online rehearsals work through a technology called JackTrip that eliminates the dreaded delay. “Sometimes I forget I am not in a normal practice because it feels so real.”

When the coronavirus pandemic exploded in the US in early 2020, the Ragazzi Boys, a group of 250 boys between the ages of seven and 18, ran through quite a few contingency plans, said Kent Jue, its director. Then, a tech worker parent of a young choir member started tinkering with hardware to find a solution for the sound latency.

Mike Dickey, one of several parents involved with finding tech solutions for the chorus, came across JackTrip, a project out of Stanford that allows musicians to synchronize their singing with software and audio circuitry that is much faster than what is available in most laptops, desktops, mobile phones or tablets. The device plugs into a wired internet connection using an Ethernet cable to avoid the delays and unpredictability of wifi.

JackTrip was made more than 10 数年前, but it has found new, widespread use in the era of coronavirus. When nearly a dozen of the Ragazzi choir members plugged into JackTrip, they heard each other sing clearly for the first time in six months.

The Lesbian/Gay Chorus of San Francisco has been signing together through a Spotify-owned sound-editing service called Soundtrap, これ lets musicians record separate parts and splice them together to make group music.

The New York Choir Project tried a different approach, asking its members to sing alongside pre-recorded voices and piano accompaniment with a muted microphone, said its founder and director, Charlie Adams.

Adams said she envisioned integrating some of the remote practicing into the choir in the future, even when they can sing together again.

“People liked that they could join in from wherever they were, even if we could not sit together," 彼女は言いました. “That is something we would like to keep around.”

While choirs have shown remarkable ingenuity, most members agree that many of the measures that make singing safe make it a lot less enjoyable than “the preferred and traditional method of singing in spaces with better acoustics and the ability to see and hear cues and body language from fellow performers”, as it was put in a 2020 paper on safe Covid singing practices in the Journal of Voice.

The Stonewall Chorale – a 70-member LGBTQ+ chorus founded in New York City in 1977 – is therefore opting to wait the virus out. Its members simply don’t want to spend time setting up an at-home singing studio for a less-than-satisfactory singing experience, said Michael Conwill, a member.

“Everyone is frustrated that it is not as musically satisfying to sit at home in your apartment and sing into a microphone alone," 彼は言った.

The group has tentatively planned its first post-coronavirus performance for the second week of December – eight months from now. But members are not taking anything for granted, Conwill said.

“It is breaking our heart to not sing with each other," 彼は言った. “We ache for singing and connection beyond the screen.”

その間, some choral directors have opted to sing in person with safety protocols in place, から choral singing masks, developed through crowdsourcing and structured to keep cloth away from the mouth while singing – to innovative outdoor concerts.

For Meg Byrne, a high school choral teacher in Iowa – a state with relatively few governmental guidelines surrounding the coronavirus – keeping students safe required a lot of research. She found best practices by collaborating with fellow instructors: the choir’s fall concert was streamed online, with the students singing masked and distanced from one another among the seats of the school theatre, rather than on stage.

“We worked very hard to keep up on everything, share it with each other, and basically shape our policy in line with what scientists around the country were saying," 彼女は言いました.

In keeping with these suggestions, some are taking their own innovative approaches. An ensemble in Canada created a drive-in concert – streaming the music over the slightly-faster radio waves to prevent the lag time experienced online.

These measures may seem extravagant, but it’s a small price to pay for even a semblance of singing together, said Mark Boyle, the national chair for the American Choral Directors Association.

“When you are part of a choir, you are part of something bigger than yourself," 彼は言った. “We have music because art is essential to the human condition, and choral music is part of that tradition. I think when we get out of this, we are going to see a renaissance of art and creation.”

There is a dizzying sense of scale imparted by the Horizon special on the coronavirus vaccine. 一方では, you have the pathogen – so tiny as to be invisible to the naked eye even as it replicates by fatal millio...