Plaque unveiled to mark the birth of the Manchester Guardian 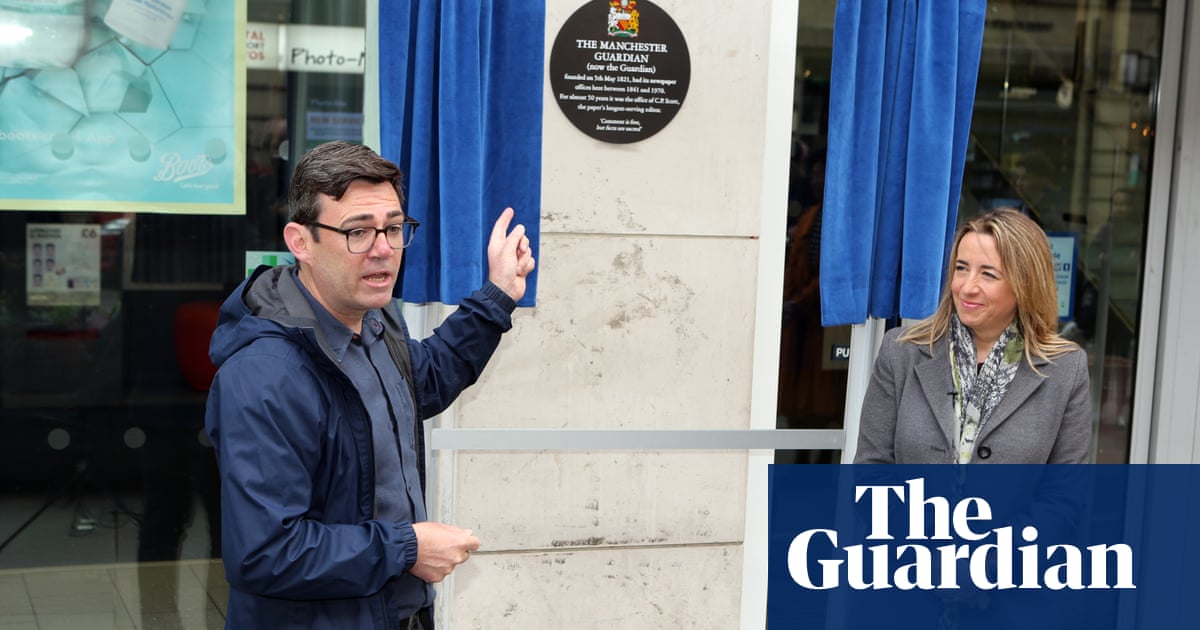 Two hundred years after it was founded in the aftermath of a bloody anti-establishment protest, a plaque has been erected to mark the birth of the Manchester guardián.

Speaking at the unveiling in Manchester city centre, Andy Burnham described the foundation of the newspaper in 1821 – now the Guardian – as a “truly important piece of British social history”.

Situated on Cross Street, the plaque is on the site of the Manchester Guardian’s office between 1841 y 1970. Por casi 50 years it was the workplace of CP Scott, the paper’s longest serving editor, who famously said: “Comment is free, but facts are sacred.” He used to cycle to the office each day from his home in Fallowfield, now Manchester’s student district.

The offices were razed to make way for what is now Boots and the Arndale Centre after the paper changed its name in 1959 and the bulk of the staff moved to London in the 1960s.

Katharine Viner, the Guardian’s editor-in-chief, paid tribute to Scott, who she said “brought great moral values and clarity” to the organisation.

“Those values, forged in the offices of Cross Street, are the values we live by today," ella dijo. “It’s sometimes said that Manchester is more than just a place – it’s an idea. And those ideas, those values, that Mancunian identity, helped found who we are. Times change, technologies change, but principles don’t.”

It was the Scott family who decided to forgo their inheritance to create el Scott Trust. It still owns the Guardian today and is devoted to securing its financial position and editorial independence in perpetuity.

Russell Scott, CP Scott’s great-great grandson, said it was in the Cross Street office that another of his ancestors, Lawrence Scott, “regrettably” took the decision to move the editorial focus down to London “to keep pace with the national news agenda”.

It might be different now, he suggested. “When I think now about how we work and communicate, I expect he wouldn’t come to the same conclusion today as he came to then," él dijo.

Year 6 children quizzed Viner on journalism. “Who is the most famous person she had interviewed?” asked Mia. (A toss up between Greta Thunberg and Taylor Swift). Robyn wanted to know if it was stressful running a global media organisation (Receta de acelgas de Thomasina Miers, said Viner, but most of the stress is the good, exciting, exhilarating kind).

Sue Stennett, the great-great-great-granddaughter of John Edward Taylor, who founded the Guardian in 1821, also attended the unveiling. Taylor, a cotton merchant, was a witness to the Peterloo Massacre, which saw at least 18 protesters killed by the state while campaigning for the vote in 1819. Appalled by the lies published by the establishment media afterwards, he decided to start his own newspaper and on 5 Mayo 1821 the Manchester Guardian was born.