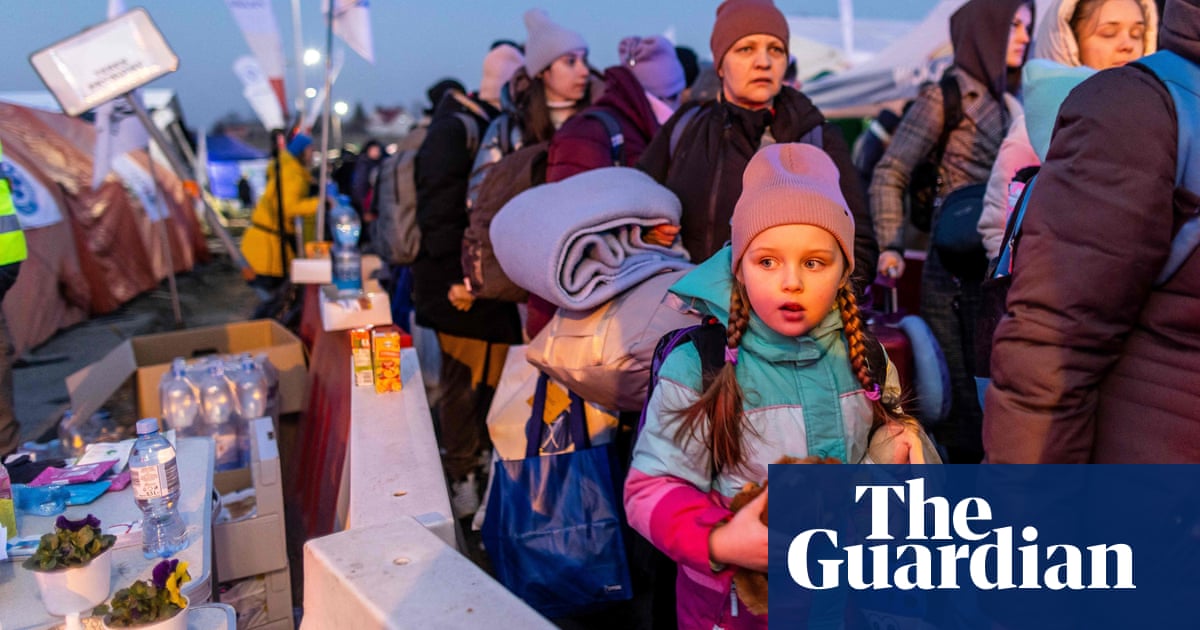 Nearly four months after the Russian invasion began, more than 7.5 million Ukrainians have fled their country and millions more have been displaced within it.

The UN’s original estimate that 4 million Ukrainians would become refugees as a result of the invasion has been dwarfed, and warnings from the UN that we were about to witness the largest refugee crisis in a century have been borne out.

The exodus has been met with an unparalleled emergency response in neighbouring countries and the rest of Europe. Almost four months on, aid agencies and volunteer organisations working with Ukrainians say they are changing their approach to the crisis and expect it to last for many months, if not years.

Chris Melzer, of the German branch of the UN High Commissioner for Refugees (UNHCR), says the millions of Europeans who have mobilised to help refugees might “no longer be in the headlines” but are still “vital” in meeting the problem. While there are signs of fatigue in the voluntary sector, he says, “it’s much less than we’d expected”.

Jason Phillips, of the International Rescue Committee (IRC), who is on the ground in Warsaw, Poland, says: “We’re in a kind of transition phase. The big question for the future is how we can support people in the medium to long term.

“The voluntary, spontaneous response which has led the effort has been extraordinary to witness. But even while that ethos remains strong, we need to expect that a lot of these contributions will come to an end,” he adds.

Across Europe, particularly in countries that have taken the largest number of arrivals, including Poland, Moldova, Romania and Slovakia, the search is on for safe, affordable and accessible accommodation for those who have left for the medium to long term.

Poland, where an estimated 3.5 million refugees have arrived since the invasion, has borne the brunt of the biggest wave of migration in Europe since the second world war.

“Even at the end of April, around 56% of those crossing the border into Poland were planning to stay with friends or volunteer hosts. But these sort of offers may not last. We cannot expect that the vacation rental on the seashore in Gdańsk that someone was offering for a week or a month initially is available any more,” says Phillips.

“This is hard in a city like Warsaw where, even before the conflict and the resulting refugee crisis, there were extreme housing shortages and rising rental prices.” The picture is similar elsewhere.

In Germany, which has taken in about 725,000 Ukrainian newcomers so far – more than any other non-neighbouring country – there is already a lack of social housing and a squeeze on affordable living space in major cities. Some communities are in the process of putting up large numbers of modular buildings to accommodate refugees, based on record efforts last summer in western Germany to shelter thousands of people displaced by devastating floods. Munich and other cities are hoping to expand the number of beds in large rescue shelters.

Ulrike Lessig, who works for the Berlin-based NGO Be An Angel, which has bussed more than 5,000 Ukrainians to Germany since the start of the conflict, says people who have escaped increasingly “want a room where they can shut the door”. Rescue shelters are not a long-term solution, she says.

Moldova in particular is feeling the strain. Europe’s poorest country has accommodated about 100,000 refugees, the most per capita in Europe. The numbers are equivalent to about 5% of the population, in a country where inflation is at 27% and the country’s almost total reliance on Russia and Belarus for gas has led to a fuel crisis.

The pressure on the education system is just one of many challenges. “The Moldovan education system simply cannot absorb all the children,” says Jovana Arsenijevic of the IRC’s Balkans office. “So we’re relying on a system of informal face-to-face education for the foreseeable future, led by Ukrainian teachers from among the refugees and including catchup classes where needed.”

They are also making use of the online learning system set up by Ukrainian teachers to cope with Covid lockdowns. “When we talk to the parents, this is their preferred way for the children to be taught, at least for this year,” she says. The IRC is providing everything from space to laptops and stable wifi.

Lessig says she also has noticed the need among new arrivals for more permanence, and the desire to find a job, even if they want to return home as soon as possible. In Germany, she has been putting newcomers in touch with volunteers to help them navigate the bureaucracy.

Phillips, who has 25 years of experience in global emergency response, says the IRC, which originally thought it might be in the region on a temporary basis, is now planning for the long haul, to “maintain a productive and supportive presence”.

In the past 100 days it has established a Warsaw office and is rapidly scaling up its hiring and infrastructure. “It’s important to remember the speed and the size of this. Even though numbers who are leaving are now down, it’s still around 20,000 a day – that’s 600,000 people a month entering Poland alone. In any context, if 600,000 people a month are crossing a border because of conflict, that is extraordinary.”

Based on the IRC’s experience, “the displacement will be protracted”, he says, “even as we hope, along with these people from Ukraine, that it will be temporary and return is imminent”.

Arsenijevic says: “A lot of people are hopeful that they can return home even if it can’t happen that fast. We already see a lot of people commuting to Ukraine to work, say to Odesa. There’s a lot of movement back and forth, and the flow into Ukraine is bigger than the influx into Moldova. However, as soon as some shelling happens, that can quickly reverse.”

There are strong indications that increasing numbers of Ukrainians are returning as the situation in parts of the country improves, Melzer says. In April, the UN put the number of Ukrainians returning home at 30,000 a day.

“Right now, there is evidence that more people are returning than are leaving, though it’s hard to know for sure,” says Melzer. “A crossing from west to east does not necessarily equate to a person returning – it might be someone coming to get documents or returning from bringing relatives to safety. At the same time, we feel the strong will people have to return and expect them to do so as soon as they are able to.”

Regular chats with refugees reveal mixed feelings, he says. “Even those who have lost everything have the feeling they are lucky to have got out, but at the same time they ask themselves: ‘Am I running away?’

“But we have to plan that we’re here for the duration.”

The Office for National Statistics survey cited in your article (UK cost of living crisis hampering efforts to host Ukrainian refugees, 10 August) shows that many Homes for Ukraine participants are willing to extend t...