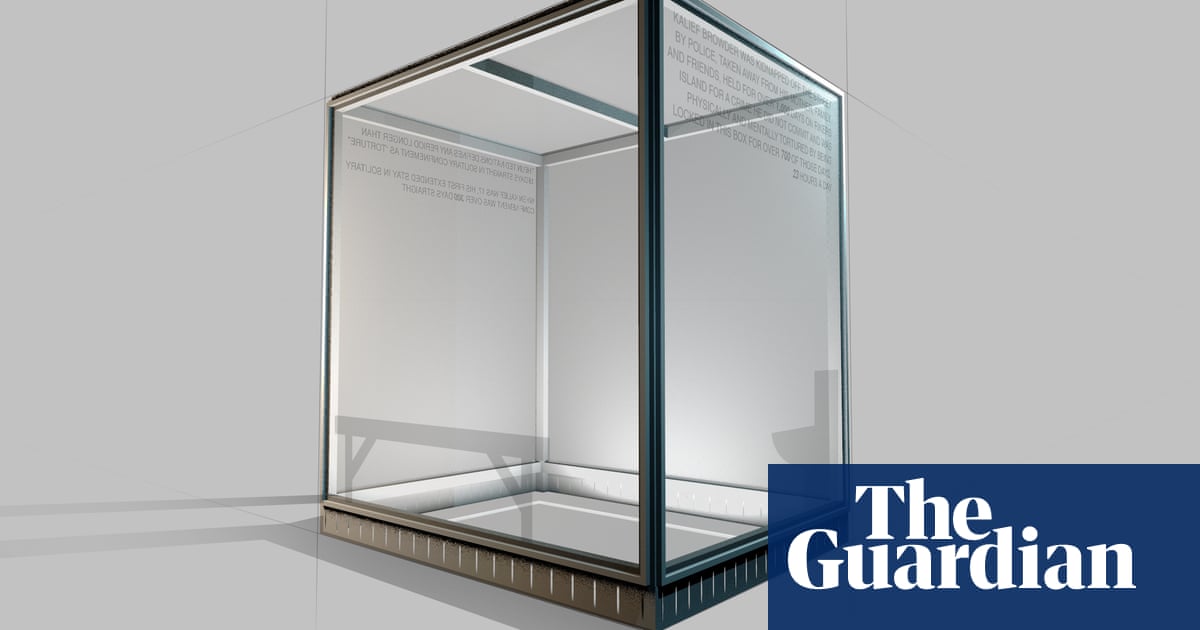 “Kalief [Browder] and his family, everything that happened to him … It hit me in the gut, like, real hard,” artist Coby Kennedy tells the Guardian. “But for the sculpture itself, the real impetus of the sculpture was how the average person doesn’t really realize what’s going on in this country. They don’t realize the country itself is committing torture daily, hourly, on so many people.”

The iron box before him resembles a truncated room, 8ft x 10ft x 6ft. It represents where Kalief Browder spent nearly two years of his youth: a solitary confinement cell on Rikers Island. Kalief Browder: The Box is a new sculpture from Kennedy, a weatherproofed steel box structure with sandblasted glass telling the story of Browder and the many abuses he suffered during his incarceration and lights illuminating the words, literally casting a light on the torture endured during his unlawful imprisonment. Gesturing to the structure with his open hand, he says: “So many people don’t realize the realities of this, of prison, of the prison system, of what happens when a person goes in, of what happens to a person while they’re in there.”

Kalief Browder was a Bronx adolescent who was jailed on New York City’s Rikers Island after being suspected of stealing a backpack. He was incarcerated and held without trial from 2010 ...에 2013. The teenager spent around two of those years in solitary confinement. The treatment created mental health issues for the teenager, who would later say the incarceration “robbed him of his happiness”. After his release, Browder filed a wrongful imprisonment case with the city of New York but later killed himself in June 2015 before the resolution of the case.

“I saw myself in him. I saw 17-year-old me in 17-year-old him,” said Kennedy. Though the two shared no personal connection, Kennedy has experienced the many manifestations of the mass incarceration system (stop-and-frisk, police harassment, the effects of mass incarceration and police intimidation) in his daily life as a black man. Kennedy describes the unpleasant and harrowing interactions it wrought. “I’ve had run-ins on the street where I’ve been wronged by cops. I’ve been abused by cops. I’ve been threatened by cops,”그는 말한다, recounting a time where he was taken into custody violently by the cops. “Stuff like that has been happening [to me] since high school. That’s that direct correlation with what started this thing with Kalief. They just rolled up on him in the Bronx and because he was wearing a shirt that somebody found similar to somebody else’s shirt that somebody had weeks ago, he got the rest of his life taken away. It’s wild.”

Though the sculpture bears his name, Kennedy, who describes his art as toying with the concept of “subjective reality”, says the piece is not made to commemorate Browder’s life or legacy, rather to tell this part of his story. In this context, the piece functions as a mirror the size of a small storage unit, perhaps to the dismay of some viewers. But such responses do not deter Kennedy. “If anything, I’m observing reality. I’m honoring reality,”그는 말한다. “I don’t think – and I don’t want to speak for anybody – but I don’t think that people that have gone through certain, very heavy aspects of reality would want that reality to watered down, whitewashed or swept under the table. I think they would want that reality to be handled with respect but for it to be put out there as what it is, as strong as it is, as painful as it is.”

사실로, the piece is designed to generate maximum impact for the viewing audience, down to the words written on the walls of the sculpture. “I wanted the story, the verbal story, the nuts-and-bolts known story of what happened to this kid, to be almost like a dream, to be almost like this ephemeral thing that just soaks into you when you look at the piece. 그래서, instead of putting hard type, I wanted to sandblast into the plexi[glass], the clear sides of the sculpture, so it almost became a part of this text cloud. It wasn’t this thing that was pasted as part of the piece; it’s carved into the piece … When people come up on this thing, they need to know the gravity of what happened to him and what happens to other people that are caught up in that situation,” Kennedy says.

This desired impact also governs the choice for the plexiglass, the artist says. “Furthermore, the reason that it’s see-through, is to give you the feeling of what it’s like inside without going inside, without having to force the viewer to go inside. Because you can see through the [sculpture] 과 [see] how cramped it is and how brutal it is, that heightens the visceral feeling of it, the visceral understanding of it. A person can just imagine themselves inside and just looking out and seeing the world go by around them but they’re in the box,” states Kennedy.