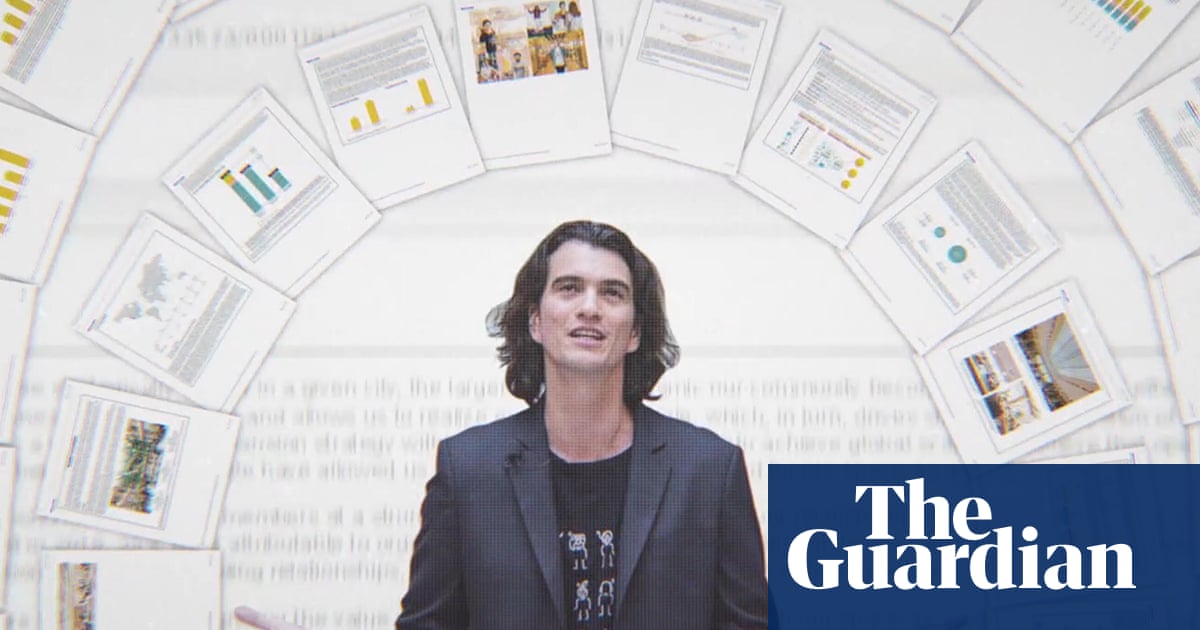 Ekt’s almost by requirement that Hulu’s WeWork: Or The Making and Breaking of a $47 Billion Unicorn, a documentary on the spectacular over-inflation of the company that coated shared offices in a soft-lit shell of capitalistic spirituality, starts with Adam Neumann (in business terms, a unicorn is a private company valued at over $1bn).

WeWork’s charismatic, erratic founder, who pitched the simple concept of leasing sub-divided office space into a multibillion-dollar investment darling backed by Saudi money and a reclusive Japanese billionaire, was a virtual movie-ready character, from weird quirks (barefoot, long hair, Kabbalah, keg-filled parties) to messianic vision (Neumann was a fan of preaching “work, work, work” with pop star-style face microphones). When he appears in the film’s first scene, in outtakes from an attempted public video statement before the company’s disastrous, and ultimately aborted, initial public offering in August 2019, Neumann’s Teflon-like sunny veneer appears to be cracking, finally reflecting the disarray behind $2.9bn of losses in the prior three years.

Standing astride a sunlit common room styled for dislocated, permalancing millennials – low-slung couches, bright colors, abundant plants, the decor of indistinguishable, forced cheeriness replicated across hundreds of co-working spaces – Neumann stumbles of his words and loses his lofty train of thought. It’s a cringeworthy attempt to spin financial disaster, the point where justified derision of WeWork and particularly Neumann’s practices – weed-filled private jets, dubious earnings reports, dropping the “Work” from the name after the company bought the trademark for “We” from Neumann himself for $6m – meets painful spectacle. Within six weeks of the footage, Neumann was out as CEO with a $1.7bn golden parachute; the company is now worth $9bn, a fraction of its $47bn private valuation by SoftBank Group in 2019.

Neumann was both the singularly bombastic face of a glorified real estate company, which he and Miguel McKelvey founded in Soho in 2010, and an emblem of eccentric, over-hyped tech CEOs who lap up investments in exchange for inflated promises or outright scams. But the success of his grandiose pitches and purpose-filled pablum (“do what you love” emblazoned everything from WeWork mugs to key cards) also owed to larger, more mundane systems: incentives for wealthy investors to value pixie dust promises and the allure, for tenants and staff in a frenzied, atomized world, of Neumann’s oft-professed vision for a “capitalist kibbutz”.

Die WeWork saga asks “a question for all of us: why does the system that we all participate in keep producing Adams, keep producing Elizabeth Holmeses, people who we think are going to save us?” the film’s director, Jed Rothstein, told the Guardian. (Full disclosure: Guardian US operated out of WeWork for a period.) “Is there a way to tweak the dials so that you still incentivize people to dream big and have big visions but that it doesn’t always seem to end up with socialized losses and privatized profits?”

But as Hulu’s documentary points out, through numerous interviews with former WeWork staff and members of its ill-fated, high-rise commune attempt WeLive attest, the WeWork promise was seductive: a sense of community and belonging for a fast-paced, information-saturated generation further atomized by the gig economy. “Everyone is kind of permalance, freelance, it’s very hard to find these work communities that are a cherished part of our lives,” Rothstein said. Making the film entirely during the pandemic heightened the importance of those loose, peripheral connections. “It’s one thing to talk to your best friend or your family, it’s another thing to have people that you enjoy a relationship with on a different level – coworkers, people who you ask about each other’s lives but we’re not quite as invested in, that’s part of our human fabric,” said Rothstein.

The film stitches together interviews with several early WeWork staff, including the company’s first female employee, a former assistant, a former lawyer and Joanna Strange, who first leaked details of WeWork’s colossal losses (deur 2018, $100m a week) to the press in 2015; explanations from several journalists who skeptically covered the WeWork saga in real time (it does not include writer Reeves Wiedeman, whose book on Neumann, Billion Dollar Loser, was published in October); and footage from the company’s heyday, particularly its booze-filled, attendance-mandatory Summer Camps whose concerts, colored lights and impassioned sermons about work resembled an evangelical revival for capitalism. (It also discusses how the company’s adjacency to so-called “wellness” culture, from in-house fruit water to a promise to heal the world, was propelled by Neumann’s wife, Rebekah, a cousin of Goop founder Gwyneth Paltrow.)

That lofty ambition, as corny as it may play in 2021, was crucial to WeWork’s self-styling as a revolutionary tech company rather than a risky leaser of existing real estate, preying on a desire to harness one’s purpose; yoking to that belief system was powerful enough that Neumann’s former assistant, Megan Mallow, discusses in the film the therapy required to “unwarp” her brain. If the pitch had been “come work for some faceless real estate company”, or “we’re going to make as much money as we can”, said Rothstein, “I don’t think it would’ve been as appealing for a lot of the people who went to work there, and I don’t think they would’ve worked as hard or for the rates that they did without the feeling that they were part of something bigger.”

The question thus arises: who to blame? Neumann was “certainly was the face of it, and he was the charismatic center of it, and legally he really controlled the company to an enormous extent, which is somewhat unusual”, said Rothstein. “But these venture capital firms, the Vision Fund – when you invest that kind of money, you’re pushing for enormous returns.” Masayoshi Son, SoftBank’s CEO and the billionaire creator of the so-called Vision Fund, promised Neumann $4bn of investment with the directive to “go crazy”. The Hulu film may focus closely on Neumann’s appeal and abuse (of trust, of finances, of emotions, according to several female employees), but the ultimate blame, said Rothstein, falls on “this incentive structure where you’re just signing as many deals as possible and growing as fast as possible, and it’s like building a rocketship as it’s flying”.

It’s unfortunate, Rothstein said, because WeWork did, in theory, propose to answer a question only heightened by the ongoing pandemic: “How can we build more sustainable communities in the context of this crazy globalized, capitalist world that are more nourishing to us and that are not just engines of greed?” That promise was long exposed as dubious and unsustainable, scaffolded by Saudi oil wealth at the whim of a far-off billionaire, and predicated on a barely concealed mantra of work until you die. But to many, the promise of changing the world was still magnetic. “The whole thing was sold as doing everything differently,” said Rothstein, “but in the end it was just doing everything exactly the same as the most rapacious companies had been doing it.”