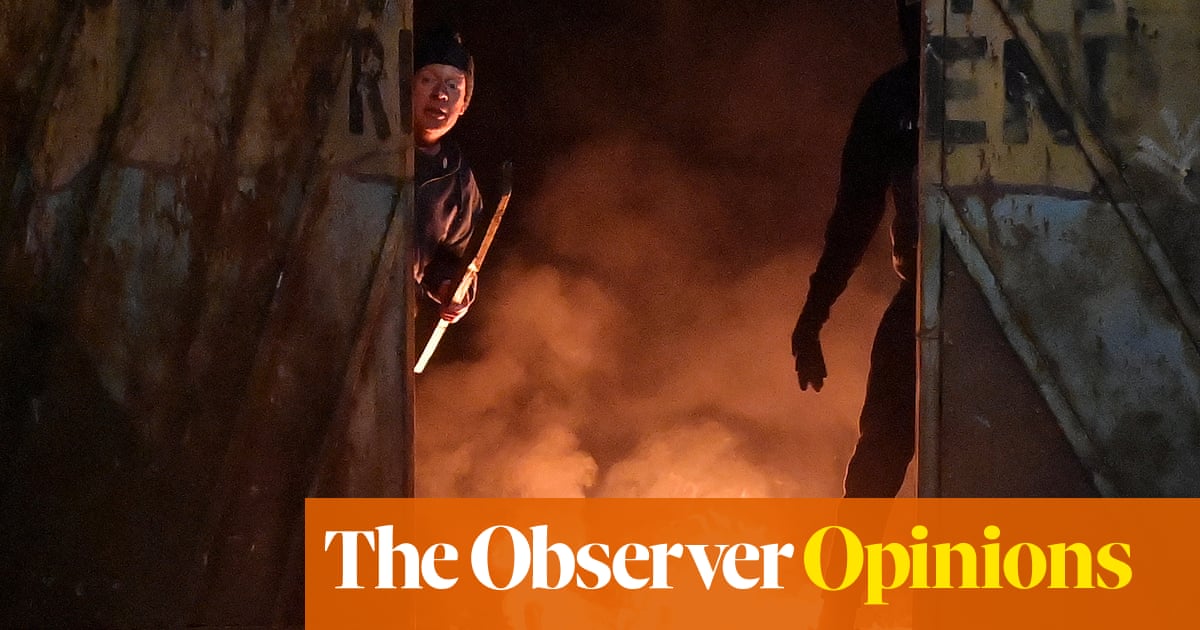 The Northern Ireland conundrum over Brexit was always insoluble. As John Major and Tony Blair pointed out in the referendum campaign, if the UK left the single market and customs union there had to be a border somewhere, either on the island of Ireland or in the Irish Sea. In either case, someone’s rights were going to be hurt: nationalists or unionists.

En diciembre 2019, Boris Johnson opted to put the border in the Irish Sea to get his Brexit deal over the line. He then chose to lie about it, live on TV, saying there would be no border and that no one would have to fill in any forms. En primer lugar, the unionist response was muted. Arlene Foster even said NI had the best of both worlds.

At the beginning of this year, sin emabargo, the truth began to seep through. Unionists realised it was they who had lost, como supermarket shelves developed gaps and it became impossible to buy English pot plants at garden centres. Unionists, who can be very literal and very moral, found it hard to believe that the British PM would have brazenly lied to them. Anger started to well up and the Loyalist Communities Council, whose launch I attended in 2015, warned of possible violence. The DUP saw support haemorrhaging to the Traditional Unionist Voice, a more radical unionist party, leaving Sinn Féin as the largest party in the polls in line to take the position of first minister in the elections next year. The DUP’s response was to demand that the NI protocol be axed.

The death of Prince Philip has led loyalist leaders to call off the rioting, at least temporarily, but we cannot be certain the calm will continue, even if there is a pause. We are now going into the “white nights” of early summer and the marching season, when violence traditionally is at its worst. There is a way to avoid a long, hot summer but it requires political leaders to take four concrete steps or else we risk undoing all the good work of the 23 años desde el Acuerdo de Viernes Santo.

Primero, we need an activist British government. It took Johnson a week to even issue a tweet on the violence. Just like his week’s delay in responding to Covid last March, this too could cost lives. The government – No 10 as well as the Northern Ireland Office – needs to work with the Irish to convene political leaders to draw a line under what has happened and encourage them all to take a responsible approach.

Segundo, it is a mistake to ignore the loyalists. They have been left behind by the progress since the Good Friday agreement and lacked a political voice since the death of the charismatic leader David Ervine in 2007. The police need to find a more effective way of dealing with criminals in paramilitary organisations, but we should also reach out to those who want to take a political way forward – and they exist – and help them into the mainstream. The degree of deprivation in the loyalist enclaves in Belfast is staggering. The statistic that sticks in my head is that these ghettos have the lowest level of educational attainment in Europe. The government in Northern Ireland and the British government need a sustained focus on changing that.

Tercero, the UK needs a new approach to the EU over the protocol. Instead of taking unilateral – and illegal – steps to delay implementing it while poking the EU in the eye, the government should try to work with it to make the protocol function in a light-touch way. Some in the commission fear Johnson’s intention is to demonstrate the protocol cannot work and force the EU to impose a border in the Celtic Sea between Ireland and the continent, effectively taking Ireland out of the single market. The problem for those unionists calling for the protocol to be scrapped is they need to propose an alternative and an acceptable one hasn’t been found in the last six years. So we have to make the protocol work and it is possible with pragmatism on both sides, particularly if the British agree to align phytosanitary standards that create most of the problems.

Lastly and perhaps most importantly, we need to expand the middle ground so politics in NI is no longer a zero-sum game between the two traditions. Afortunadamente, that is happening. Por lo menos 20% of the population now define themselves as neither unionist nor nationalist and the support for the Alliance party has been surging. Unionists are naturally afraid of being pushed into a united Ireland against their will as the result of demographic change and as the consequences of Johnson’s Brexit choice force them into the economic orbit of Brussels. A push for Scottish independence after the elections in May will accentuate that fear. A stronger centre could help de-dramatise the issue and remove the threat of a cliff-edge 48%/52% votar in a border poll, which would be everyone’s nightmare. It is undoubtedly the best way to draw the poison of identity out of politics in Northern Ireland.

All this requires the British government to start paying attention to Irlanda del Norte rather than cynically using it. The worst problems in Ireland have always happened when Britain ignores it. And it means no more using it as a battering ram in a new post-Brexit conflict with the EU. Most of all, it means coming clean with the people of Irlanda del Norte about where they stand. The government can no longer claim clean hands if it fails to take these steps and the result of its political approach is the unravelling of peace in Irlanda del Norte.