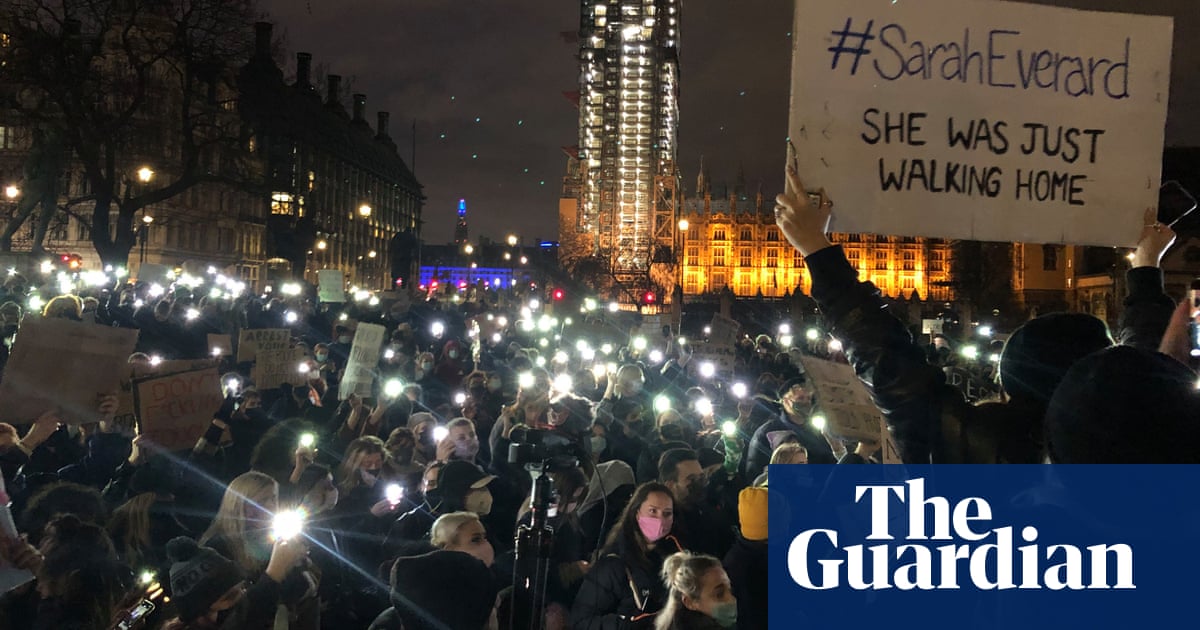 More than a thousand people streamed into Parliament Square in Londra on Sunday evening to make their voices heard outside the seat of government following clashes at a vigil for Sarah Everard, with police this time taking a hands-off approach.

Calling for the resignation of the Met commissioner, Cressida Dick, and the scrapping of the Polizia Stradale, crimine, sentencing and courts bill, the crowd initially congregated around the statue of the suffragist Millicent Fawcett.

They had gathered at the police headquarters, New Scotland Yard, on Sunday afternoon before marching to Parliament Square. Demonstrators chanted “kill the bill” and slogans against Priti Patel, il ministro degli interni, who has set out a hard line on protest.

There was a markedly different police response at the protest, which was called largely in response to allegedly heavy-handed tactics at the vigil in Everard’s memory on Saturday.

The police kept their distance from the crowd at the latest event. There were six police vans parked outside Westminster tube station but officers largely remained inside them. Several women were allowed to make their speeches at Parliament Square before organisers told the crowd to leave.

Women and men stood quietly listening as the names of women killed by their partners, or who have died in UK prisons, were read out. A minute’s silence was held in memory of Everard, 33, whose body was found in woodland in Kent. A serving Met officer has been charged with her murder.

Sisters Uncut, the feminist group that called Sunday’s protest, explicitly linked it to the passage of the police, crimine, sentencing and courts bill, which will be debated in parliament on Monday amid concerns that it will grant greater powers to limit the right to protest.

The vigil was supported by All Black Lives UK, the group behind many of last summer’s Black Lives Matter demonstrations.

The Labour MP Nadia Whittome was in the crowd. Lei disse: “I am angry and I can’t stop thinking about Sarah and every woman whose life has been cut short by male violence, so I came in solidarity with other protesters [contro] violenza maschile, police brutality and Priti Patel’s push to strip us of our rights.

Sophie Brown, 28, a former theatre stage manager, was in the crowd carrying a placard saying: “txt me when you’re home, babe.” She said: “It’s about time the laws are changed. There’s plenty of police on the street but there seems to be no justice whatsoever.

A spokesperson for Sisters Uncut said: “We came out again today because the violence from the Met police yesterday told us that not only are we not safe in the streets from strangers but that police are also the perpetuator.”

The group invited the crowd to attend a meeting on Thursday to discuss next steps. The spokesperson added: “This is not a moment, this must be a movement, because we can’t allow any more women to die and we have to kill the bill that will give police more powers to use violence against us.”

La professoressa Sarah Gilbert sull'eredità del lockdown, the killer of Sarah Everard, has denied indecently exposing himself in the weeks before he kidnapped her. The 49-year old made a brief court appearance by video link on Tuesday where he pleaded not guil...