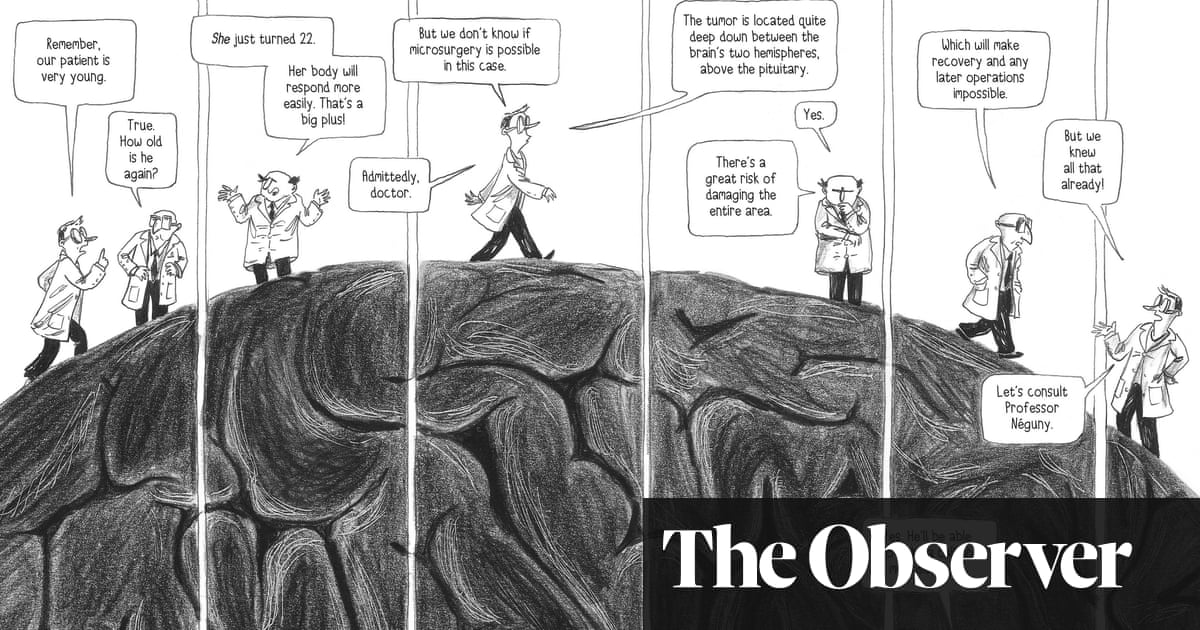 There are so many good graphic memoirs about illness: when it comes to ill-defined symptoms, and to the way that time contracts and expands in the sickroom, comics seem to reach places that words cannot. But Élodie Durand’s Parenthesis, which has already won several awards in her native France, really is extraordinary: a book I began to think of as a classic even before I’d finished it. If its author is expert in the matter of pain – able to convey the qualities of a headache in a single, scrawled black line – she’s even better on the ticking of the clock. As its title suggests, Durand wants to know what it means for the future when the present is paused – and thanks to this, its publication in English could hardly have come at a better, more resonant moment.

Durand drew Parenthesis a decade after the events it describes. When it begins, she’s in her early 20s, a fine-art graduate who’s working on a big mural in the basement of a hospital just outside Paris. For a long time, she has suffered from what her family describes as “spells”: periods when, pale and shaking, she can only stare into nothingness, and which she can never remember herself afterwards. But now they start to get worse. A neurologist diagnoses her with epilepsy, and the drugs he prescribes work for a little while. Pretty soon, though, she begins a terrible descent. She sleeps more and more. She is able to function less and less. Her memory disappears, and with it, everything she has ever learned – including, at one point, her own name. What’s happening? A brain scan reveals an inoperable tumour. Her only hope is an experimental “gamma knife”.

Parenthesis deploys a regular comic strip to detail Durand’s burgeoning disabilities, her infuriating encounters with doctors, and her trip to the hospital in Marseille where she will undergo treatment, and she can be very witty, relentless as these things all are. But she’s at her best when she breaks out of this format, punctuating her narrative with harrowing drawings from her sketchbook – her contorted bodies bring to mind Munch and Schiele – and visual skits on particular body parts. In one, two doctors, deep in discussion about possible cures, are climbing a tussocky hill – a mound that, on closer inspection, is revealed to be a huge brain. In another, Durand fantasises about having a head she can lift off her neck with her own hands, leaving it to roll on the ground as she walks away from it.

If this all sounds a bit grim, well, it can be, at moments. But this is also a book about the sweetness of life, and what it means to return to it after a long absence. These days, her doctors no longer have to watch her carefully “like milk on the boil”. On the page, she draws a pair of brackets, each one as tall as she is, and herself stepping out from inside them. It’s as if she is emerging from a dressing room in a beautiful new dress – one that fits so well, it might have been made for her especially.