Panic at the pumps could herald a brave new Brexit order. I have my doubts 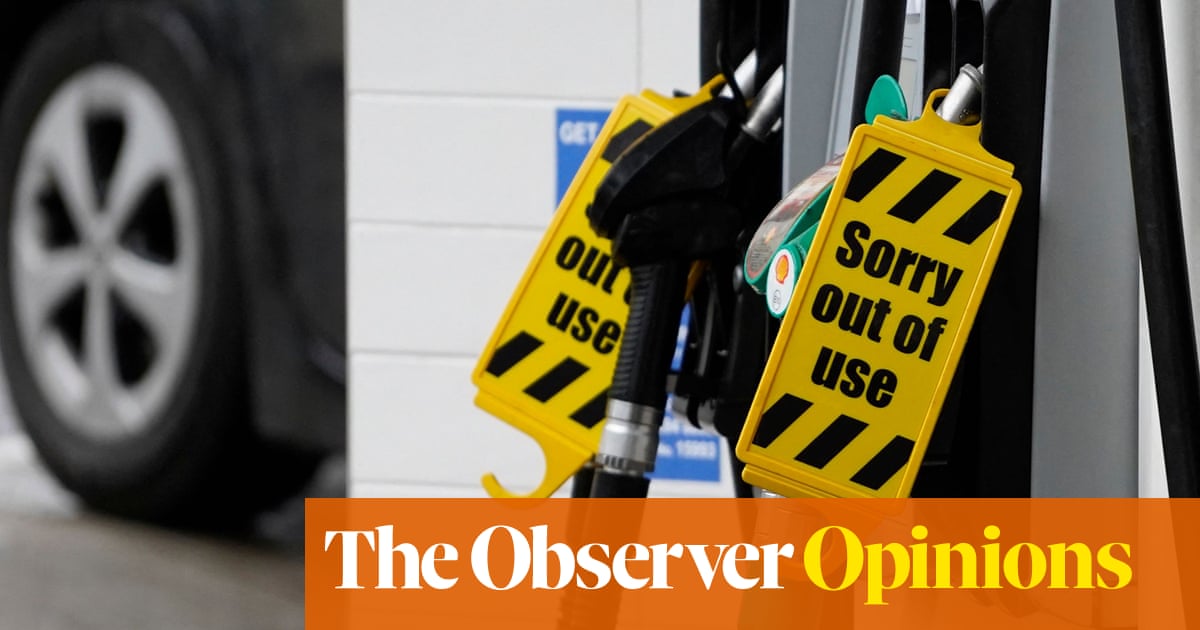 Driving across France last Thursday was like driving in Britain used to be – no worries about petrol and no queues. Returning to London was a brutal tipping into another reality. One of the first duties of a government is to ensure that citizens can go about their daily business without hassle and anxiety. With abundant petrol in the refineries there was never need for this pain – we are living through an abject failure of governance.

Brexit is plainly one of the reasons for the shortage of drivers and for the troublesome frictions at our borders spilling over into problems in the food and supermarket supply chains. More crucially, it was ministers’ very fear that early action would be seen as proof positive of Brexit’s frailties that so paralysed them.

Thus road haulage chiefs met junior transport minister Baroness Vere on 16 June to urge temporary visas for overseas drivers, a campaign to attract retired drivers back to work and one to address the driving test backlog. But transport ministers don’t trust the “Remoaner” road haulage lobby, loud in its early criticism last winter of how hard Brexit’s new border controls has made it to move goods in and out of Britain. On top, every minister recalls the ruthless withdrawal of the Tory whip from 21 colleagues in September 2019. To have any pro-EU sympathies is a mark of Cain.

Vere knew that, as a former executive director of the Conservatives In campaign, she is viewed with suspicion and No 10 wanted the line held. The industry should pay better and recruit and train more British drivers. Part of the point of Brexi was to shift from a low-wage, low-skill economy dependent on EU migrants. She closed the June meeting by telling executives the government “did not want to create panic”, leaving unsaid that any panic six months after Brexit would be politically toxic.

Over the summer, the line held even as problems mounted. On the evening of 23 settembre, just as news that BP was closing some petrol stations because of tanker driver shortages, the home secretary, Priti Patel, was celebrating with 25 other self-styled “Spartans” – the Tory MPs who voted three times against Theresa May’s compromise Brexit deals – at the Carlton Club. They congratulated themselves on the hardest of hard Brexits they had achieved, along with Patel’s visa policy excluding low-paid immigrants. Boris Johnson, urged to create at least 20,000 visas to bring in foreign drivers to have a chance of tackling the crisis, knows how strongly his political base supports Patel’s stance on immigration. He did the least possible, announcing 10,500 temporary three-month visas for tanker drivers and poultry workers, keenly aware of the impending turkey shortage about to blight Christmas.

It was “the equivalent of throwing a thimble of water on a bonfire”, as Baroness McGregor-Smith, president of the British Chambers of Commerce, memorably said. Adesso, belatedly, comes the news that 100 army tanker drivers begin on Monday, to be joined by 300 overseas drivers fast-tracked in on a visa especially extended to February. Vere has finally written to a million holders of HGV licences urging them to return to the industry. The thimble of water has grown into a bottle, but the bonfire shows every sign of burning out only slowly and already at the cost of a collapse in business confidence. Panic buying and lost trust are hard to reverse.

Of course the government should have acted far more decisively, far sooner – and provided the public with accurate information. Accuracy and honesty are the best ways of calming fears. But there is remarkably little outcry about its dithering and its bluster: un YouGov poll reports that only 23% of the population blame it and nearly half blame the media.

One reason is that Labour cannot lay into the Brexit-induced dither as authentically and strongly as it could and should; it backed the treaty and judges that the public is not yet ready to hear advocacy for the EU. Nonostante tutto, most Leavers continue to back Brexit. They might feel they voted for a higher-wage, higher-skill economy propelled by lower immigration and that, however bumpily, it’s now in train. Advertised pay rates for HGV drivers have risen 12.8% this year alone, while working-class Leave voters might like the spectacle of Tory ministers urging employers to pay and train people better.

And yet HGV drivers are only one sector. Immigration was always more a manpower than a wages game. Per esempio, the Bank of England found that all EU immigration between 2004 e 2011 reduced semi- and low-skilled service sector wages by less than 1% a year. Any impact was on the lowest 10% of wage earners and then only slight. But what immigration did was to expand the economy: an economy’s annual output represents the number of average hours worked multiplied by the output per person hour, multiplied by the working population. Immigrants don’t change investment or productivity, but they increase the numbers able to pick fruit, kill pigs, rear turkeys and drive lorries.

Without immigrants, the economy grows less quickly or shrinks. A quarter of all UK firms, including half of all transport businesses, say they can’t fill vacancies because EU applicants no longer apply. Their scope to pay higher wages is capped by how much they can sell on profitable margins; if they can’t employ people at an affordable wage, then supermarket shelves aren’t stocked and tanks in petrol stations aren’t replenished.

Without free movement of EU workers or a liberal visa policy, Britain has an intertwined manpower, mobility and skills crisis: there are not enough people in the right places with the right skills to sustain the output we are used to. The mismatch will eventually be solved, the solution delayed by our chronically weak training system and housing shortage; the economy will be smaller, people will gradually acquire the necessary skills, but the dislocation will involve shortages, queues, even rationing and very low growth.

Nel frattempo, surveys show a growing majority in favour of immigration. The open question in British politics is whether Brexit can even half work before the public gives up on it. The government’s actions betray its anxiety over the answer. My guess, after this week, is that the moment when the public begins to stop believing is approaching and faster than anyone thinks.

The supply chain crisis has already forced supermarkets to use cardboard cutouts to hide gaps on shelves. Now even more Britons are turning to growing their own food. Infatti, according to one small survey, three-quart...