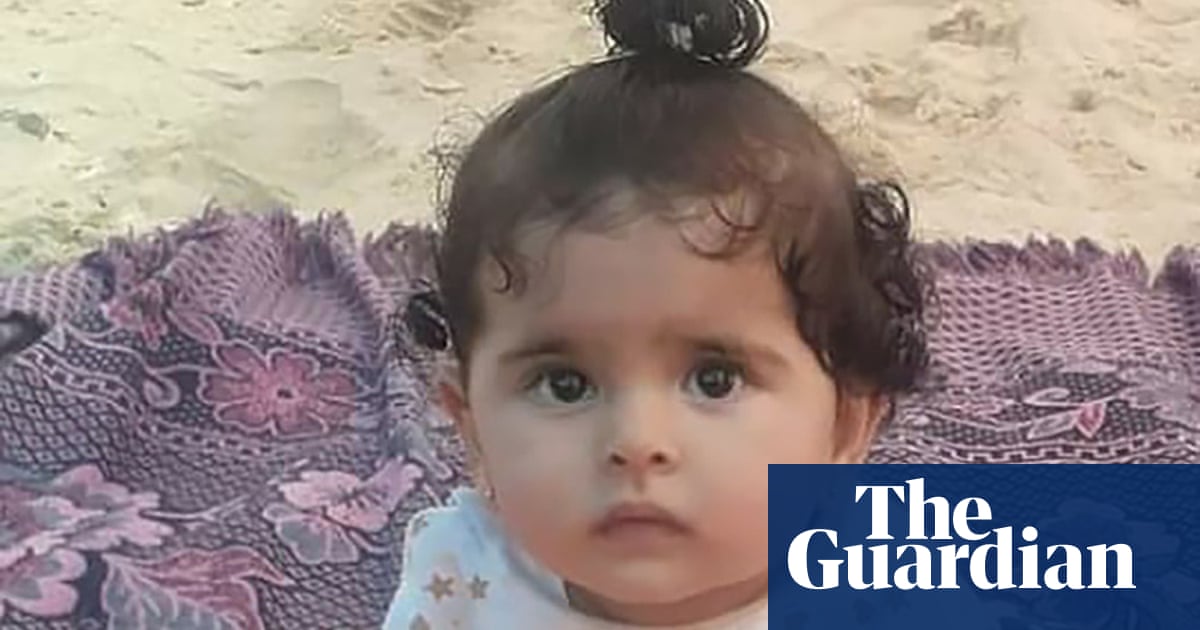 A 19-month-old child has died in Gaza after waiting for five months for 이스라엘 to grant her permission to leave the blockaded enclave for treatment.

Human right groups said Israel’s blockade of 가자 was responsible for the death of Fatima al-Masri, who was diagnosed last year with a hole in the heart and who died on Friday.

“I loved her from deep inside my heart. I wish I had died as well as her,” said Jalal al-Masri, Fatima’s father. “They kept saying the application was ‘under review, under review’ and then she died.

“It felt like I had died as well without Fatima in my life. Nothing breaks a person more than losing their child.”

Masri said that Fatima missed two appointments for treatment at Jerusalem’s al-Makassed hospital in December and February while her family were told her case was “under review” by the Coordination and Liaison Administration (CLA), the Israeli authority which handles Palestinian travel permits.

“We are under blockade. I don’t understand how Israel can send me this message about her case being under review. If Israel wanted to send her by herself for treatment, then send her,” said Masri.

그만큼 Al Mezan Center for Human Rights, a Palestinian NGO, took on Fatima’s case when Masri complained in February, urging Israel to issue the permit in time for her to be taken to al-Makassed in the week after the appointment, before the hospital takes a patient off its list.

“Al Mezan deeply regrets Fatima’s death and strongly condemns Israel’s ongoing closure on the Gaza Strip and its associated restrictions on the movement of Palestinians, that includes denying patients access to the hospitals in the West Bank, East Jerusalem, Israel and abroad,” the NGO 성명에서 말했다.

Al Mezan said the Israeli authority, which makes decisions on permits, referred them instead to the Palestinian Civil Affairs Committee (PCAC), which co-ordinates with Israel.

Israel approved 69% of permit applications from patients in Gaza in February but 56% of applications for companions to patients were not responded to in time for the appointment, 에 따르면 World Health Organization’s monthly report.

Miriam Marmur, a director for Israeli group Gisha, which campaigns for Palestinian freedom of movement, said Israel appears to have changed how it deals with permits, no longer handling applications from human rights groups or lawyers but directing them through the PCAC.

“Unfortunately, non-response to permit applications is a practice of bureaucratic violence used by Israel on a regular basis,” said Marmur. “In a growing number of cases, even patently humanitarian and highly urgent ones such as Fatima al-Masri’s, people receive no response from the CLA, effectively blocking them from accessing medical treatment, as well as other needs. We know of multiple cases where people are not receiving answers to their applications for urgent treatment outside of Gaza.”

Palestinians have to travel for serious conditions that the overburdened health system in Gaza cannot treat, but face long waits for permits to both Israel and Egypt, where they also endure a difficult journey through the Sinai desert.

The UN’s special rapporteur for Palestine, Michael Lynk, in a report last week that described Israel’s control over Palestinian territories as “apartheid”, said Gaza’s health system “is flat on its back, with serious shortages of healthcare professionals, inadequate treatment equipment and low supplies of drugs and medicines.”

Mahmoud Shalabi, programme manager in Gaza for the charity Medical Aid Palestine, said the blockade had “suffocated” the health system, leaving hospitals short of medicine and equipment, and that conditions had worsened during the pandemic.

“My cousin, who was suffering from cancer, tried to seek specialist care in East Jerusalem, but died while waiting for a permit. She left behind five young children,” said Shalabi.

“Accessing care feels like a lottery. The case of 19-month-old Fatima is another devastating story. But these stories will keep appearing while Israel’s blockade and restrictions are in place.”

The Israeli military authority over the Palestinian authorities, the Coordinator of Government Activities in the Territories, did not respond to the Guardian’s requests for comment.