Outcry after Oklahoma prisoner vomits and convulses during execution 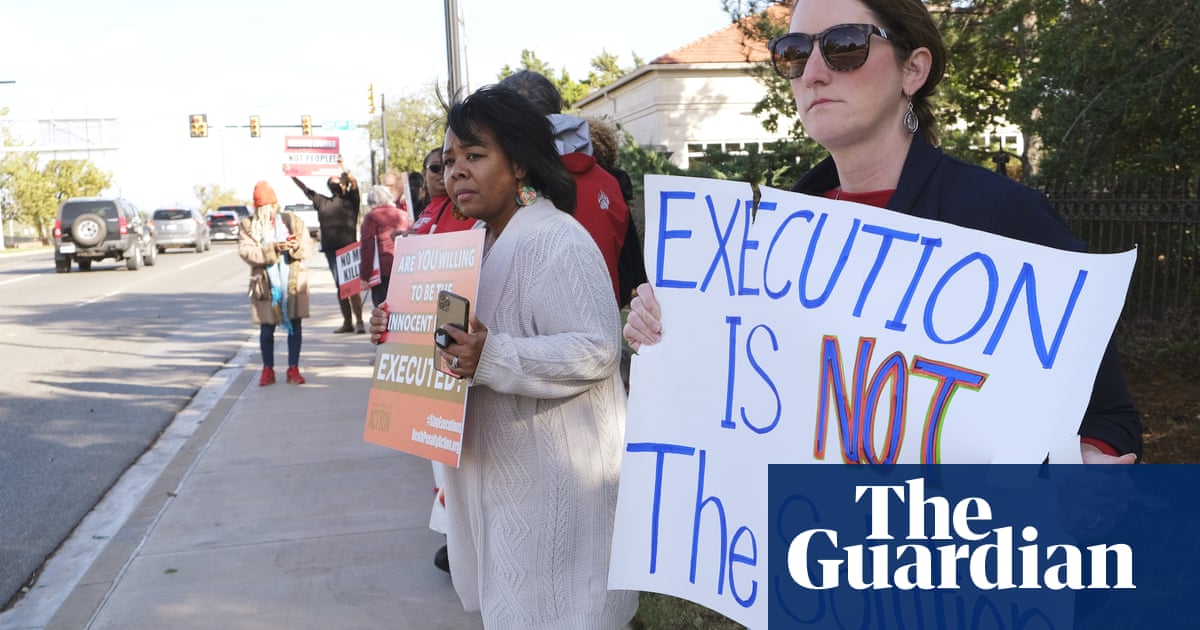 Oklahoma is coming under sharp criticism after witnesses to the state’s first judicial killing for six years described gruesome scenes of the dying prisoner convulsing and vomiting as he was administered the lethal injections.

John Grant, 60, was pronounced dead at 4.21pm on Thursday at McAlester state penitentiary after he was injected with a triple cocktail of midazolam, vecuronium bromide and potassium chloride. Later, the department of corrections said the killing had gone “in accordance with protocols and without complication”.

But eyewitness accounts from reporters at McAlester’s supposedly state-of-the-art death chamber gave a very different account. Dan Snyder, an anchor at the Oklahoma TV channel Fox 25, said that events went drastically off course the instant the first drug, the sedative midazolam, was injected into the prisoner.

“Almost immediately after the drug was administered, Grant began convulsing, so much so that his entire upper back repeatedly lifted off the gurney,” Snyder reported. “As the convulsions continued, Grant then began to vomit. Multiple times over the course of the next few minutes medical staff entered the death chamber to wipe away and remove vomit from the still-breathing Grant.”

It took 15 minutes for Grant to be declared unconscious by medical staff, after which the vecuronium bromide, which paralyses the body, and potassium chloride, which stops the heart, were given.

On Twitter, Snyder gave his response to the state’s official claim that all had gone according to plan. “As a witness to the execution who was in the room, I’ll say this: repeated convulsions and extensive vomiting for nearly 15 minutes would not seem to be ‘without complication’.”

Accounts of the botched execution of Grant, who was being put to death for the murder in 1998 of a prison cafeteria worker while he was already serving a sentence for armed robberies, will come as a deep embarrassment for Oklahoma. No judicial killings have taken place in the state since 2015 after a spate of botched procedures caused widespread alarm and forced the authorities to review their use of lethal injection drugs.

In 2018, officials in the state went as far as to announce they would abandon lethal injections entirely, due to the protocol’s lack of transparency and to the inhumane executions that had taken place. But in August the state reversed that decision, saying it would resume executions without giving an explanation for the U-turn or revealing critical details about how it intended to carry out the killings.

The state’s six-year hiatus was prompted in part by the execution in 2014 of Clayton Lockett, who writhed and groaned on the gurney for 43 minutes before he was declared dead after the intravenous line through which the lethal drugs were delivered was inserted improperly. The gruesome descriptions of his death by eyewitnesses in the Guardian and elsewhere caused nationwide revulsion.

The following year the state used the wrong drug to kill Charles Warner. In the wake of these botched procedures a bipartisan commission reviewed the state’s death penalty system and issued a highly critical report that called for the moratorium on capital punishment to be extended.

Maya Foa, joint executive director of the human rights group Reprieve US, said that Grant had suffered the “same horrifying fate as Clayton Lockett and Charles Warner”. The disturbing scenes had occurred as a result of the state returning to the failed methods of lethal injections “under cover of secrecy”.

Foa added that “these drugs were never intended for capital punishment, and it is little wonder that the healthcare companies that make them universally and publicly oppose their misuse in executions. What happened yesterday shows lethal injection is broken beyond repair.”

Robert Dunham, executive director of the Death Penalty Information Center, told Associated Press that Grant’s convulsing and vomiting was extremely rare. “I’ve never heard of or seen that. That is notable and unusual.”

Grant’s execution was allowed to proceed on Thursday after the US supreme court voted five to three, with the three liberal justices dissenting, to allow the judicial killing to go ahead. It is unclear whether the descriptions of his death will affect future planned executions in the state.

Oklahoma has an aggressive calendar of executions scheduled, with six set to take place by the end of March.