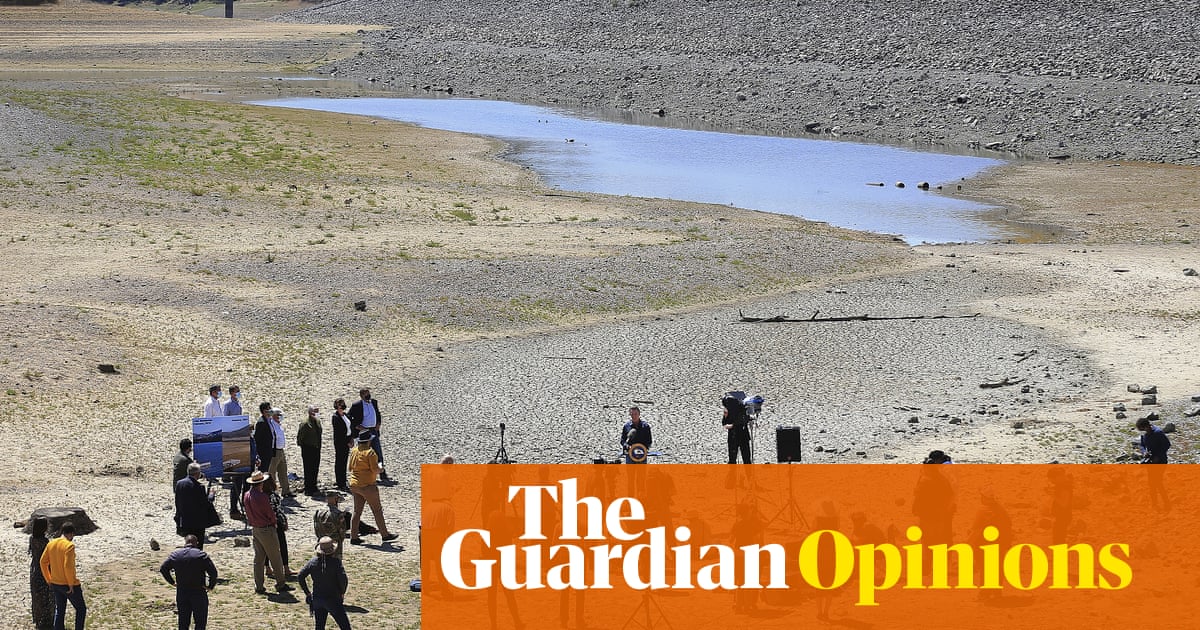 Human beings crave clarity, immediacy, landmark events. We seek turning points, because our minds are good at recognizing the specific – this time, this place, this sudden event, this tangible change. This is why we were never very good, most of us, at comprehending climate change in the first place. The climate was an overarching, underlying condition of our lives and planet, and the change was incremental and intricate and hard to recognize if you weren’t keeping track of this species or that temperature record. Climate catastrophe is a slow shattering of the stable patterns that governed the weather, the seasons, the species and migrations, all the beautifully orchestrated systems of the holocene era we exited when we manufactured the anthropocene through a couple of centuries of increasingly wanton greenhouse gas emissions and forest destruction.

This spring, when I saw the shockingly low water of Lake Powell, I thought that maybe this summer would be a turning point. At least for the engineering that turned the southwest’s Colorado River into a sort of plumbing system for human use, with two huge dams that turned stretches of a mighty river into vast pools of stagnant water dubbed Lake Powell, on the eastern Utah/Arizona border, and Lake Mead, in southernmost Nevada. It’s been clear for years that the overconfident planners of the 1950s failed to anticipate that, while they tinkered with the river, industrial civilization was also tinkering with the systems that fed it.

The water they counted on is not there. Lake Powell is at about a third of its capacity this year, and thanks to a brutal drought there was no great spring runoff to replenish it. That’s if “drought” is even the right word for something that might be the new normal, not an exception. The US Bureau of Reclamation is overdue to make a declaration that there is not enough water for two huge desert reservoirs and likely give up on Powell to save Lake Mead.

I got to see the drought up close when I spent a week in June floating down the Green River, the Colorado River’s largest tributary. The skies of southern Utah were full of smoke from the Pack Creek wildfire that had been burning since June 9 near Moab, scorching thousands of acres of desert and forest and incinerating the ranch buildings and archives of the legendary river guide and environmentalist Ken Slight (fictionalized as Seldom Seen Slim in Edward Abbey’s novel The Monkey Wrench Gang), 今 91. Climate chaos destroys the past as well as the future. As of July 6, the fire is still burning.

It wasn’t just the huge plume of smoke that filled us with dread about the adventure to come; the weather forecast of daily temperatures reaching 106 F made living out of doors for a week seem daunting. Water level in the river was far lower than normal and due to drop a lot more; the temperature on our rafts and kayaks just above the water was tolerable – but as soon as you walked any distance from the river’s edge, the heat came at you as though you’d opened an oven door.

We saw an unusual amount of wildlife on the trip too – mustangs, bighorn sheep, a lean black bear and her two cubs pacing the river’s edge – but any sense of wonder was tempered by the likelihood that thirst had driven them down from the drought-scorched stretches beyond the river. We need a new word for that feeling for nature that is love and wonder mingled with dread and sorrow, for when we see those things that are still beautiful, still powerful, but struggling under the burden of our mistakes.

Then came the heat dome over the Northwest, a story that didn’t appear to make the top headlines of many media outlets as it was happening. Much of the early coverage showed people in fountains and sprinklers as though this was just another hot day, rather than something sending people to hospitals in droves, 殺害 hundreds (and likely well over a thousand) in Oregon, ワシントン, そして British Columbia, devastating wildlife, 作物, and domestic animals, setting up the conditions for wildfires, and breaking infrastructure designed for the holocene, not the anthropocene. It signified something much larger even than a crisis impacting a vast expanse of the continent: increasingly wild variations from the norm with increasing devastation that can and will happen anywhere. It seemed to get less coverage than the collapse of part of a single building in Florida.

A building collapsing is an ideal specimen of news, sudden and specific in time and place, and in the case of this one on the Florida coast, easy for the media to cover as a spectacle with straightforward causes and consequences. A crisis spread across three states and two Canadian provinces, with many kinds of impact, including untallied deaths, was in many ways its antithesis. There was a case to be made that climate change – in the form of rising saltwater intrusion – was a factor in the Florida building’s collapse, but climate change was far more dramatically present in the Pacific Northwest’s heat records being broken day after day and the consequences of that heat. In Canada the previous highest temperature was broken by eight degrees Fahrenheit, a big lurch into the dangerous new conditions human beings have made, and then most of the town in which that record was set burned down.

Later news stories focused on one aspect or another of the heat dome. The Canadian Broadcasting Corporation 報告 that the heat wave may have killed more than a billion seashore animals living on the coast of the Pacific Northwest. Lightning strikes in BC, generated by the heat, soared to unprecedented levels – inciting, by one account, 136 forest fires. The heat wave cooked fruit on the trees. It was a catastrophe with many aspects and impacts, as diffuse as it was intense. The sheer scale and impact were underplayed, along with the implications.

Political turning points are as manmade as climate catastrophe: we could have chosen to make turning points out of the western wildfires of the past four years – notably the incineration of the town of Paradise and more than 130 of its residents in 2018, but also last year’s California wildfires that included five of the six largest fires in state history. It could include the deluge that soaked Detroit with more than six inches of rain in a few hours last month or the ice storm in Texas earlier this year or catastrophic flooding in Houston (と 40 inches of rain in three days) and Nebraska in 2019 or the point at which the once-mythical Northwest Passage became real because of summer ice melt in the Arctic or the 118-degree weather in Siberia this summer or the meltwater pouring off the Greenland ice sheet.

A turning point is often something you individually or collectively choose, when you find the status quo unacceptable, when you turn yourself and your goals around. George Floyd’s murder was a turning point for racial justice in the US. Those who have been paying attention, those with expertise or imagination, found their turning points for the climate crisis years and decades back. For some it was Hurricane Sandy or their own home burning down or the permafrost of the far north turning to mush or the IPCC report in 2018 saying we had a decade to do what the planet needs of us. Greta Thunberg had her turning point, and so did the indigenous women leading the Line 3 pipeline protests.

Summarizing the leaked contents of a forthcoming IPCC report, the Agence France-Presse reports: “Climate change will fundamentally reshape life on Earth in the coming decades, even if humans can tame planet-warming greenhouse gas emissions […] Species extinction, more widespread disease, unliveable heat, ecosystem collapse, cities menaced by rising seas – these and other devastating climate impacts are accelerating and bound to become painfully obvious before a child born today turns 30. The choices societies make now will determine whether our species thrives or simply survives as the 21st century unfolds…”

The phrase “the choices societies make” is a clear demand for a turning point, a turning away from fossil fuel and toward protection of the ecosystems that protect us.

Every week I temper the terrible news from catastrophes such as wildfires and from scientists measuring the chaos by trying to put them in the context of positive technological milestones and legislative shifts and their consequences. You could call each of them a turning point: The point last week at which Oregon passed the ビル setting the most aggressive clean electricity standards アメリカ合衆国で, 100% clean by 2040. The point at which Scotland began getting more electricity from renewables than it could use. The point at which New York State banned fracking. The Paris Climate Treaty in 2015. Of course, as with the climate itself, many of the changes were incremental: the stunning drop in cost and rise in efficiency of solar panels over the past four decades, the myriad solar and wind farms that have been installed worldwide.

The rise in public engagement with the climate crisis is harder to measure. It’s definitely growing, both as an increasingly powerful movement and as a matter of individual consciousness. Yet something about the scale and danger of the crisis still seems to challenge human psychology. Along with the fossil fuel industry, our own habits of mind are something we must overcome.