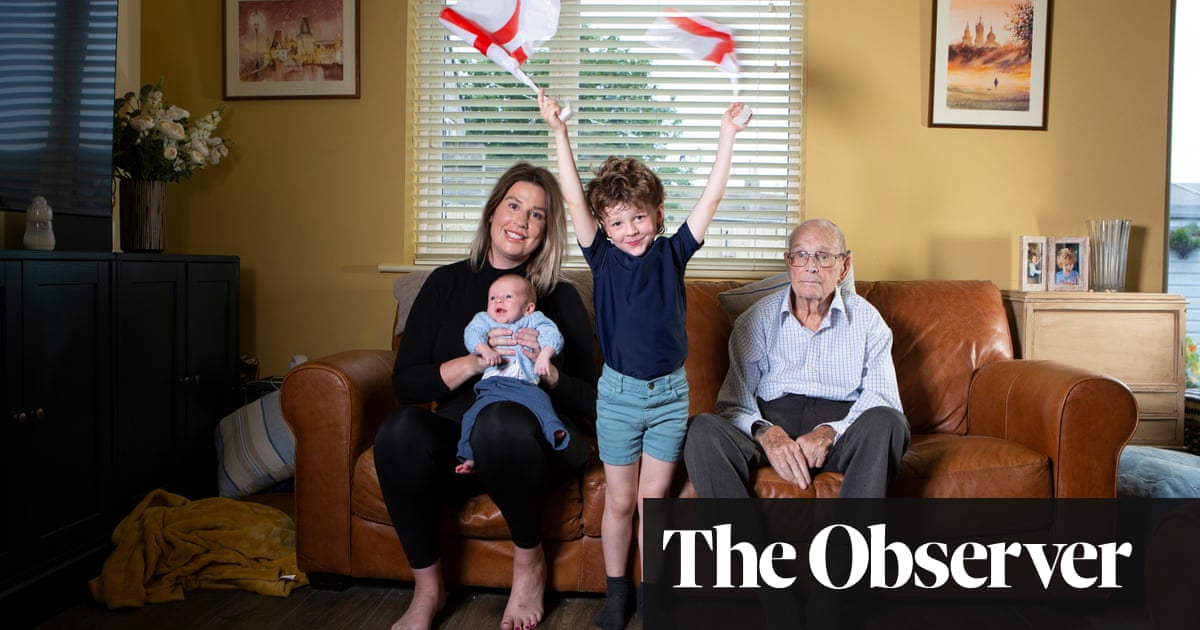 John Coward was 39 years old when Inghilterra faced West Germany in the 1966 World Cup final at Wembley. A seaman in the merchant navy, he watched the match on a black-and-white TV at home in Alnwick, Northumberland, with his three children, Christine, Denny and John, invecchiato 11, 10 and six.

Coward just about kept his emotions in check until Geoff Hurst galloped down the pitch in extra time and lashed the ball in the top corner, securing his hat-trick, England’s 4-2 victory and the country’s first, and only, Jules Rimet trophy. “When he scored the goal,” Coward recalls, “I had John sitting on my knee and I got that excited that I threw him up in the air and his head nearly touched the ceiling!"

Coward, who turns 95 in agosto, admits he definitely didn’t imagine in 1966 that it would be more than half a century before the England men’s team would again reach the final of a major tournament. Ma, as a fan of Newcastle United (who last won the top division in 1927, when Coward was one), he’s no stranger to disappointment and had long given up any hope of seeing the national team reach such heights again.

“He’s got a bit despondent over the years with England,” says Denny, who is 65 now and ran a business before caring for her mother full-time when she was diagnosed with dementia. “Obviously, when you get to nearly 95, you’re living on borrowed time. And he did say to me one time that he would like to see them win something before he, as he puts it, kicks the bucket.”

Mercoledì sera, Coward watched England’s tense, at times excruciating, ultimately euphoric, 2-1 victory against Denmark with three generations of his family in the house in which he grew up in Amble.

He was the oldest person in the room; the youngest was his great-grandson Louis, aged one month. Louis slept through most of the match, but his brother Rudy, four, watched it in red and white face paint, sitting next to his great-granddad. There might have been 90 years between them, but for 120 minutes they were wordlessly very much in sync.

When I catch up with the family on Thursday there are, as you might expect, some woozy heads. “I couldn’t get him out of bed,” says Rudy’s mum, Hannah, a support worker. “Late for school this morning, weren’t you?” Hannah’s sister Julia hadn’t emerged yet (it’s 4.30pm). “She never normally gets hung over,” reports Hannah, with a mischievous smile.

You can forgive them for getting carried away; it’s not been the easiest year for this family, like many others. When Covid-19 hit, Coward was living on his own. For almost six months, his only contact was a wave and a truncated chat when his children (or their children and their children) dropped shopping on his doorstep. Deaf in one ear, and hard of hearing in the other, Coward struggled to make sense of video calls.

“Before all this kicked off, he would go into the kitchen and make himself things to eat and go on his scooter and put his little bet on, get fish and chips on a Friday,” says Denny. “All these independent things, but slowly but surely, because he wasn’t doing them – you know what they say: use it or lose it. He just wasn’t looking after himself properly, he wasn’t eating properly. And I could tell by his mental state as well: he was moody and depressed quite a lot.”

Last month – around the time the Euros were getting under way, as it happens – Coward moved in with Denny. He’s much more cheerful now, and even riding an exercise bike for five minutes every day. “He’s like a different person, a new man,” says Denny. “And the football couldn’t have come at a better time. It’s something that can bring you all together.” I ask Coward if he’s enjoyed watching the matches with Rudy. “It’s been all right,” he replies, a tad grumpily. The family falls about in hysterics: "Bene, there you go,” sighs Denny. “You’re supposed to say it feels special. It’s hard getting a four-year-old and a 94-year-old to behave!"

Hannah doesn’t know for sure how much the Euros are sinking in for her son. His favourite player is Marcus Rashford, though he’s coming round to Harry Kane. Rudy started playing football when he was three, going to sessions every Tuesday, but they were cancelled because of Covid-19 and haven’t started up again. He’s now lived a third of his life in the shadow of the pandemic.

“Rudy’s spending a lot of time with my granddad adesso,"dice Hannah. “So I hope he remembers it. It would be nice if he was able to tell his children: ‘I watched that match with my great-granddad.’”

Tonight, once again, four generations of Coward’s family will come together to watch England take on Italy. They will be desperate to see Gareth Southgate’s team end 55 years of disappointment and underachievement, but the past 18 months have provided them with enough perspective to know they will survive if England are defeated. “We’ve come out the black hole, haven’t we?” says Denny. “Winning would be the icing on the cake, but I don’t think it would be the end of the world if they didn’t, because they’ve done so well to get where they’ve got to.”

All that said: appena supposing Raheem Sterling does burst through the Italian defence and dispatch England’s winner, let’s hope Coward doesn’t fling little Rudy through the ceiling this time.