Olympic athletes and volunteers in Tokyo ‘tortured’ by hottest Games ever 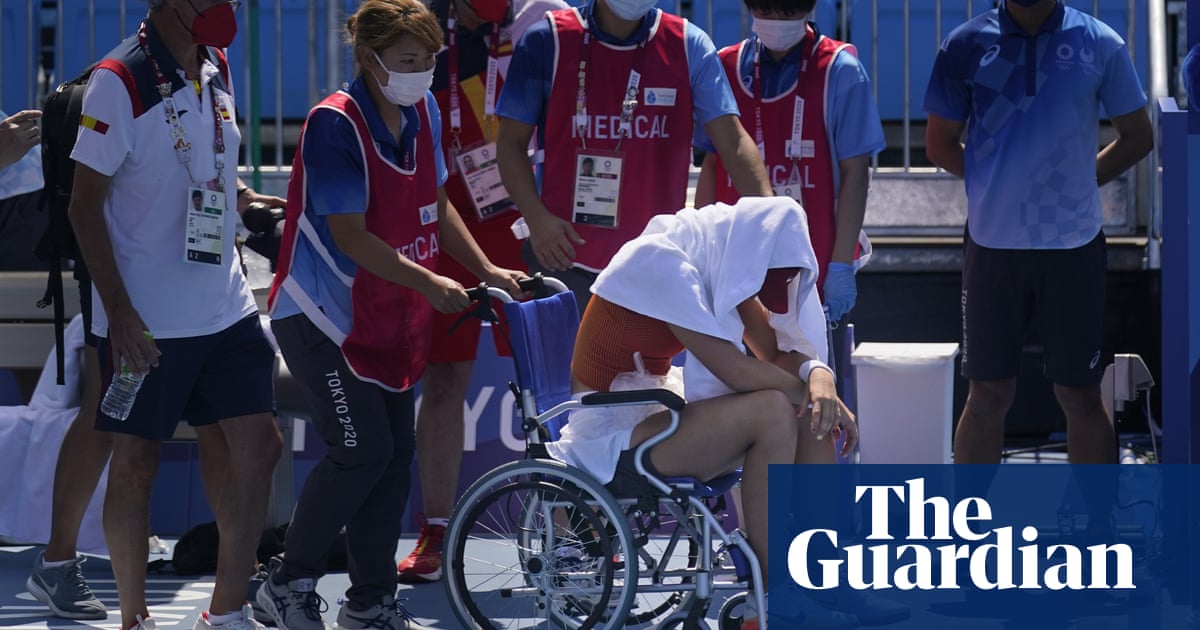 Olympic athletes and volunteers in Tokyo are being “tortured” by dangerous heat, meteorologists have warned, as the hottest Games in history puts pressure on organisers to rethink the future of sport in a climate-disrupted world.

Temperatures hit 34C in the Japanese capital on Thursday with humidity of nearly 70%. Athletes and sports scientists say this combination of heat and moisture has led to “brutal” conditions, which must be avoided at future events.

This could limit the range for endurance sports in terms of geography, season and time of day. Pressure will grow for big events to be moved to cooler seasons, higher latitudes, morning and evenings. Many elite athletes, like many specialist species, will see their habitat shrink.

This Olympics has highlighted the risk of trying to continue with sporting business as usual. At least two tennis players retired mid-match with heat exhaustion – Zarina Diyas and Spain’s Paula Badosa, with Badosa taken off-court in a wheelchair. In the men’s singles quarter-final, Daniil Medvedev needed two medical timeouts. “I can finish the match, but I can die,” he told the umpire. “If I die, are you going to be responsible?” After the game, Medvedev said he hadn’t been able to breathe, felt “darkness” in his eyes and “was ready to just fall down on the court”.

World No 1, Novak Djokovic said the conditions were more brutal than anything he had experienced in a 20-year career. “You’re constantly dehydrated, you feel you have weights on your shoulders because there’s so much heat and humidity and stagnated air,” he said. He and others have demanded a rethink of the schedule. As a result, organisers say they will add two days to the tournament at the next Olympics to allow more recovery time, and fewer games in the midday sun.

Water sports have offered no relief. Long distance swimmers had to wake up before dawn so their event could start at 6:30 and finish before the worst of the morning heat. Even so, the water temperature in Tokyo Bay rose to 29C, which was described as being as “hot as soup”. The artificial rapids for the canoe slalom were so warm that one competitor, Matej Benus of Slovakia, described them as “like paddling in bathwater.”

Russian archer Svetlana Gomboeva was treated for heat exhaustion. Beach volleyball players said the sand was almost too hot to stand on. Brazil’s 2016 gold medallist Bruno Schmidt, was astonished: “The first two weeks here are one of the hottest that I had in my life, believe it or not.”

Sayaka Mori, a meteorologist with the NHK broadcaster, said the high moisture content of the air on Wednesday meant that temperatures felt above 40C, which is dangerously high. “Oppressive heat is really torturing the Olympians and volunteers in Tokyo,” she tweeted. “Be careful of heatstroke.” Thursday was then warmer still.

Games director-general Toshiro Muto said only 30 people had suffered mild heat-related illness thanks to countermeasures, including ice jackets, mist-sprays, salt tablets, and rescheduling events to cooler evenings. “I believe our steps have been working well so far,” said.

Two endurance events – the marathon and race walk – were moved 800 km north to the usually much cooler island of Hokkaido, though even Hokkaido is now sweltering in its most severe heatwave for 97 years.

Summer Olympics in Los Angeles, Athens, Atlanta, Sydney, Beijing and Rio de Janeiro all registered peak temperatures in the mid 30Cs. But Tokyo is more relentlessly warm and humid – the two elements in wet bulb globe temperature (WGBT), which is the key measurement for heat-stress risk.

“Tokyo is regularly experiencing WBGT conditions of more than 30C, some days peaking above 32C. That is several degrees above Rio, London, Beijing and other Olympics” said Oliver Gibson, senior lecturer in exercise physiology at Brunel University.

It a far cry from the “mild and sunny weather” that the Tokyo bid committee had promised in 2013 as “an ideal climate for athletes to perform at their best”. They should have known better. As early as 1964 – the last time Tokyo hosted the Olympics – organisers were wary enough of the summer heat to schedule the Games in October.

Since then the city has been getting hotter. According to Nasa, temperatures in Tokyo have risen by 2.9C since 1900, almost three times the world average. This is largely because the city has been encased in so much concrete that warm air gets trapped, leading to an “urban heat-island effect”.

Human-caused global heating is also driving up temperatures across the planet and threatening to turn festivals of sport into endurance ordeals, according to Russell Seymour, founder of the British Association for Sustainable Sport.

“Athletes testing themselves at the highest levels of human capacity are being asked to compete in environments that are becoming hostile to human physiology. Our love and appetite for sports risks straying into brutality,” he wrote ahead of the Games.

Exertional heatstroke is one of the top three causes of sudden death in athletes and explains why heatwaves tend to kill a disproportionately high number of 15-to-19-year-old men. It occurs when strenuous exercise – often in hot and humid conditions – pushes core body temperatures to 40C, beyond which sweating and other cooling techniques are inadequate and organ functions start to collapse.

Athletes can adapt – up to a point. Paul Hough, a sports scientist with Oxford Brookes University, has helped British Olympians, F1 drivers and tennis players with heat acclimatisation – usually carried out on a treadmill in an enclosed chamber where humidity can be raised as high as 86%.

Hough said heat stress came in three stages: 1) heat cramps, which affect performance and can make the athlete dizzy 2) heat exhaustion, when energy is so run down that competitors have to withdraw, as was the case with Paula Radcliffe in the 2004 Athens marathon and 3) heatstroke, which can be fatal if not treated rapidly by ice-jackets, cold-baths and slush-drinks – all of which are in use in Tokyo.

But in wet-bulb temperatures in the mid-30Cs, even this is not always enough. “You can do all the acclimatisation training you like, but there is a point when the body reaches its limits. You can just about play football in 40C, but all the quality goes out of the game. When you reach those extremes, organisers have to move things around – schedule in the evening or choose a different date in the calendar.”

Next year’s World Cup in Qatar has been moved to the winter for this reason. In the UK, the British Association of Sport and Exercise Science recently started work on an action plan to “tackle the climate emergency” . It is scheduled for release ahead of Cop26 in Glasgow in November.

Gibson predicts heat will change the way sport is run in the future. “With climate change and the globalisation of sport, I think it is certain that the sporting landscape will be impacted by temperature more and more. In the future, we may be looking at some locations being unable to host sporting competition due to rises in temperature.”

It may also be necessary to arrange more breaks in play, delayed competition and scheduling adjustments. “I foresee the big battle here will likely be with broadcasters, rather than the sportsmen and women themselves.”