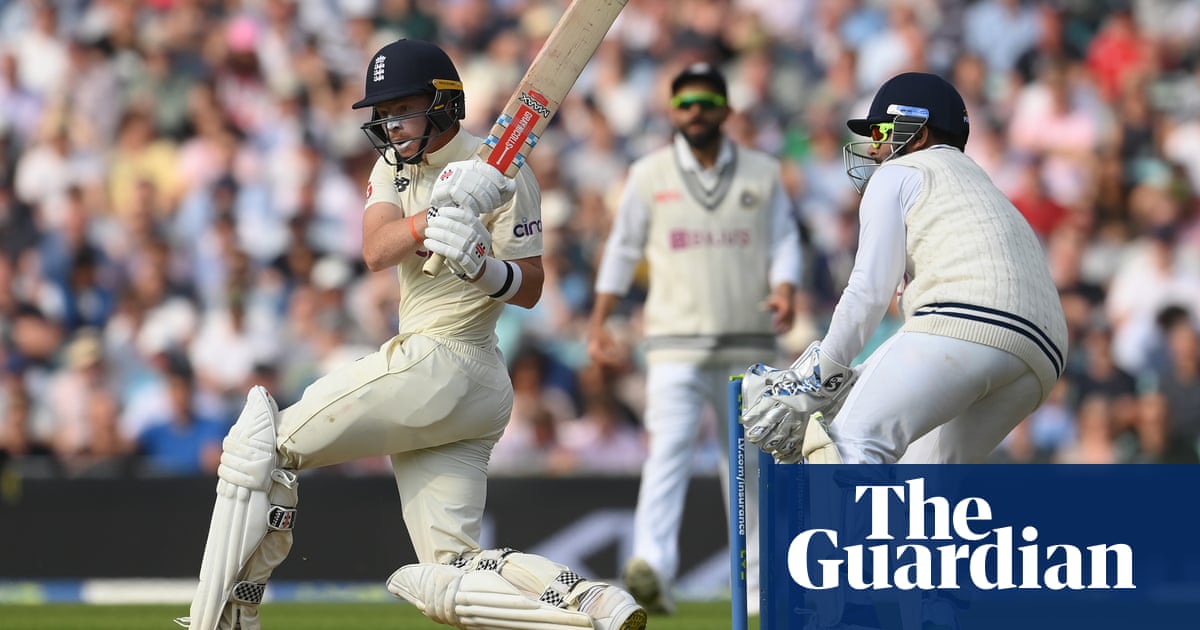 There are still three days to go in this fourth Test and those with tickets for the back end will be getting nervous. India’s second innings is already underway and with the ball on top thus far – 20 wickets having fallen – alternative plans may be in order.

Those who pitch up this morning are in for a treat, at least, with England in the hunt for wickets and the tourists set to resume on 43 for no loss but still 56 runs in arrears. This compelling series is currently locked at 1-1 but something is about to give.

It follows the latest arm-wrestle between these two imperfect sides, one which finished with openers Rohit Sharma (20) and KL Rahul (22) stoutly resisting England’s four-pronged seam attack for 16 overs as they pressed hard for the initial incision.

A tense final passage of play also witnessed the fifth dropped catch by Joe Root’s side in the match. Jimmy Anderson found the edge of Sharma’s bat in his second over but Rory Burns, unsighted at second slip by the dipping sun, was unable to pounce.

Though a disappointment for the majority of the crowd – one whom, the now infamous “Jarvo 69”, had made an early exit in a police car after his third pitch invasion of the series – the day as a whole offered plenty to cheer about after England, replying to India’s 191 all out, stumbled to 65 for five first thing.

Surrey’s Ollie Pope was the source of much of this, delivering a fine 81 on his return to the side that, along with useful thirties from Jonny Bairstow and Moeen Ali, plus a buccaneering 50 from the blade of Chris Woakes, helped muster 290 all out and a first innings lead of 99.

It meant for the first time this series Root was not England’s top-scorer and the fact that Pope stepped up will be a boon for the management. The 23-year-old’s best work is princely but here, in his first half-century for 16 Test innings, there was added steel, (even if his previous first-class average of 101.8 at the Oval took a hit).

Pope had gambolled down the dressing room steps in just the second over of the morning, Craig Overton’s stint as nightwatchman having been terminated by Umesh Yadav and a wild slash to slip. England were a perilous 54 for four, 아직도 137 runs behind, yet the factor 50 smeared over his nose and cheeks pointed to a batsman fully intent on still being out there for the afternoon sunshine.

The situation soon deteriorated, Umesh going around the wicket to Dawid Malan and finding the left-hander’s outside edge on 31. As well as a smart piece of bowling, Rohit Sharma highlighted the virtues of a settled cordon – something England currently lack – with a diving pouch at second slip. 인도, having fought back on day one, were now threatening to overwhelm their hosts completely.

But Pope pushed back in style. His stand of 89 with Bairstow was the highest of the match and began with a punchy counterattack. Pope started this, picking off Shardul Thakur for four in four balls, with Bairstow then responding with three more off Mohammed Siraj’s following over. By lunch England had two set batters at the crease and a healthier 139 for five on the board.

Not for the first time in this series Bairstow appeared in command only to leave the crowd wanting more, that off stump guard leaving him vulnerable to the ball that nips back in and Siraj exploiting this on 35 after the restart. As Bairstow walked off, voicing his frustration at the stewarding and some perceived movement behind the arm, England’s newly-installed vice-captain replaced him.

What followed from Moeen, in a stand of 71 alongside Pope, met the expectations of admirers and detractors alike. For the best part of 90 minutes the left-hander delivered some of his greatest hits, caressing the ball to the rope seven times in that usual languid style. But having punched Jasprit Bumrah square to draw the scores level, and then met a change of ball with a repeat off Siraj, Moeen then tried to launch Ravindra Jadeja out of the ground only to hole out on 35.

It meant Woakes resuming after tea with the score on 227 for seven, the right-hander opening proceedings with a succession of guided fours through third man. But when Pope’s vigil was finally terminated, bowled off the inside edge by Thakur, and Ollie Robinson missed a slog sweep off Jadeja, England were 255 for nine and in danger of squandering their previous hard work.

For the second day running Woakes underlined his value after a maddening 12-month absence, following figures of four for 55 by marshalling a precious 45-run final-wicket partnership with Anderson to which the latter contributed one run.

Like Thakur’s half-century the day before, this involved Woakes chancing his arm but there were some gems among his 11 fours too, not least when the right-hander cleared the front leg and drilled his fellow all-rounder through the covers.

The fun ended in slightly comical fashion, it must be said, Woakes run out trying to sneak a bye and the Oval crowd roaring in delight when the big screen told them it was Anderson’s 100th not out in Test cricket.

The milestone may have drawn a wry smile from the 39-year-old but his mood was soured by the late drop. Instead India’s openers held firm with 70 minutes of graft and the destiny of a breakneck Test match remains wide open.