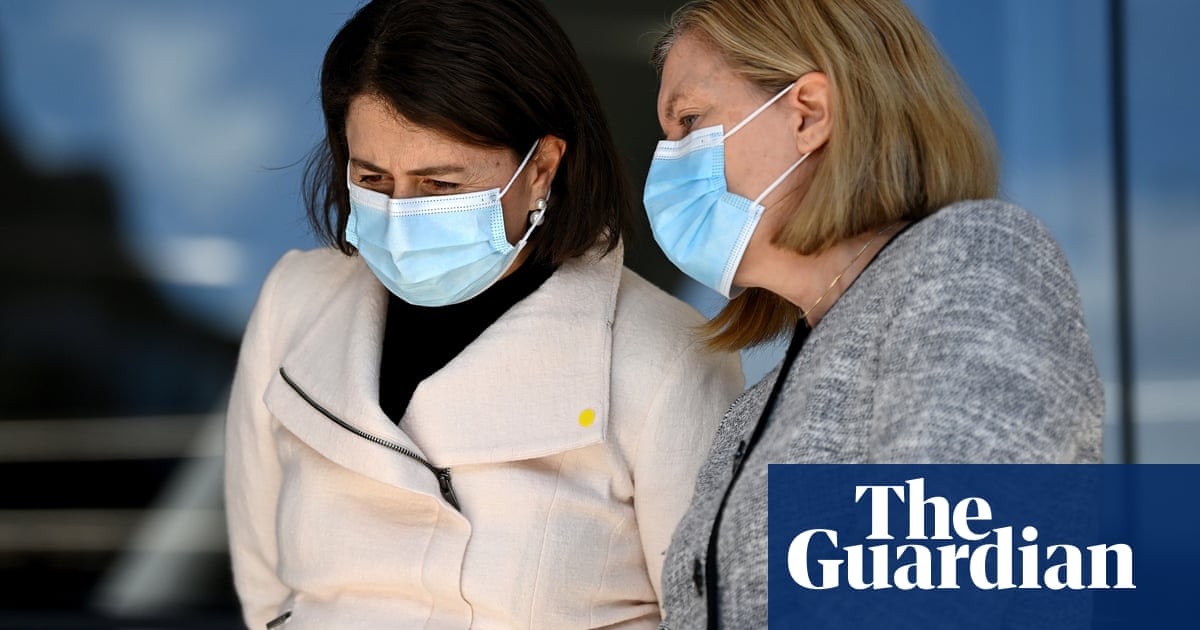 People visiting GP clinics and pharmacies while infected have been identified as a new driver of the spread of Covid, particularly in south-west Sydney, prompting the premier to urge people to stay at home and call ahead before visiting health services.

Cases announced on Thursday included a Covid-positive patient who attended Liverpool hospital and a staff member at Chris O’Brien Life House, a cancer centre in Sydney’s inner west. The latter case was picked up during routine testing of staff and further urgent testing is under way.

NSW recorded 65 new cases in the 24 hours to 8pm on Wednesday, maar tot 36 were out in the community while infected. Die premier, Gladys Berejiklian, warned residents to expect higher numbers on Friday.

Sommige 28 were not isolating and seven were partially isolating. One case was still under investigation.

“Based on the fact that we had 28 people infectious in the community in the last 24 ure, I am predicting that we will have higher case numbers tomorrow,” the premier said.

'Nou, I want to send the following strong message to the community: whilst the case numbers are bouncing around, we are seeing a stabilisation. They are not growing exponentially. That tells us that the settings that we have in place are having an impact. My strongest message to everybody is keep doing what you are doing.”

The list of the latest exposure sites includes numerous medical centres and pharmacists, mostly in south-west Sydney. Late on Thursday, an aged care home in Minchinbury in western Sydney confirmed a contract cleaner had tested positive for the virus prompting a lockdown of the facility.

A spokesperson for Minchinbury Manor said about 90% of its 134 residents had received some level of vaccination and there had been no Covid cases among them to date.

The spokesperson said the centre believed 90% of staff have been vaccinated “and we have directed the remainder to be vaccinated urgently”.

“We anticipate the remaining few residents and staff, who are not vaccinated, will be offered the vaccine again in the facility following the positive case. To date, no other staff member or resident in the facility has shown a positive result,” the centre said in a statement.

At least one paramedic in south-west Sydney, believed to have been infected in the community and not at work, tested positive to the virus. More paramedics have also been diagnosed, according to media reports.

“NSW Ambulance is investigating reports of further positive cases in paramedics who had no contact with the confirmed case. Urgent contact tracing is under way,” the service said in a statement.

At least another 70 paramedics have reportedly been forced into isolation as close contacts.

Berejiklian and the chief health officer, Kerry Chant, have urged people to get tested, but are saying to get tested at a drive-through centre rather than at their GP.

Berejiklian urged people to seek medical care but phone first – particularly if they had symptoms of Covid.

Chant said: “Don’t go to those facilities. Get someone to go to the pharmacy from another household, or ring the pharmacy and see what can be done if you have symptoms and need paracetamol.”

Berejiklian defended the lockdown settings, saying the health advice was that they were sufficient. But she faced strident questioning over why the government was not prepared to implement more stringent restrictions or to define essential work more clearly.

Chant revealed that authorities were investigating two workplace clusters in Greenacre – at Hanson Concrete, where there were four cases among employees, and D & M Excavations and Asphalting, where there were nine.

The government has steadfastly refused to define essential work, instead leaving it to employees and employers to decide whether work can be done from home.

The construction industry is permitted to continue operating, including government projects such as Westconnex.

Despite the new cases among building suppliers, Berejiklian said the construction industry was operating because it could do so safely.

“We know that those organisations that are continuing work are doing so in a Covid-safe way," sy het gese. “But what is really important is to make sure that when we highlight work sites where there is evidence of transmission, that people sit up and notice.

“I think there has been a bit of perhaps confusion with the employers," hy het gesê.

“I have heard that some employers are telling employees they must come into the office. They think they really need them there. Well I am just going to emphasise to the employers throughout NSW: we are all in this together. Please understand there actually is a health order requiring you to allow your workers to work from home unless they really can’t.”

Berejiklian rejected suggestions that stronger restrictions were needed, saying her decisions were based on the best health advice in the nation. But she also refused to say that the measures would be effective to end the lockdown by 30 Julie.

“All we are saying is when we receive the health advice we get that health advice based on the situation at the time," sy het gese. “I wish I had a crystal ball to know what this situation will be in two weeks’ time.”