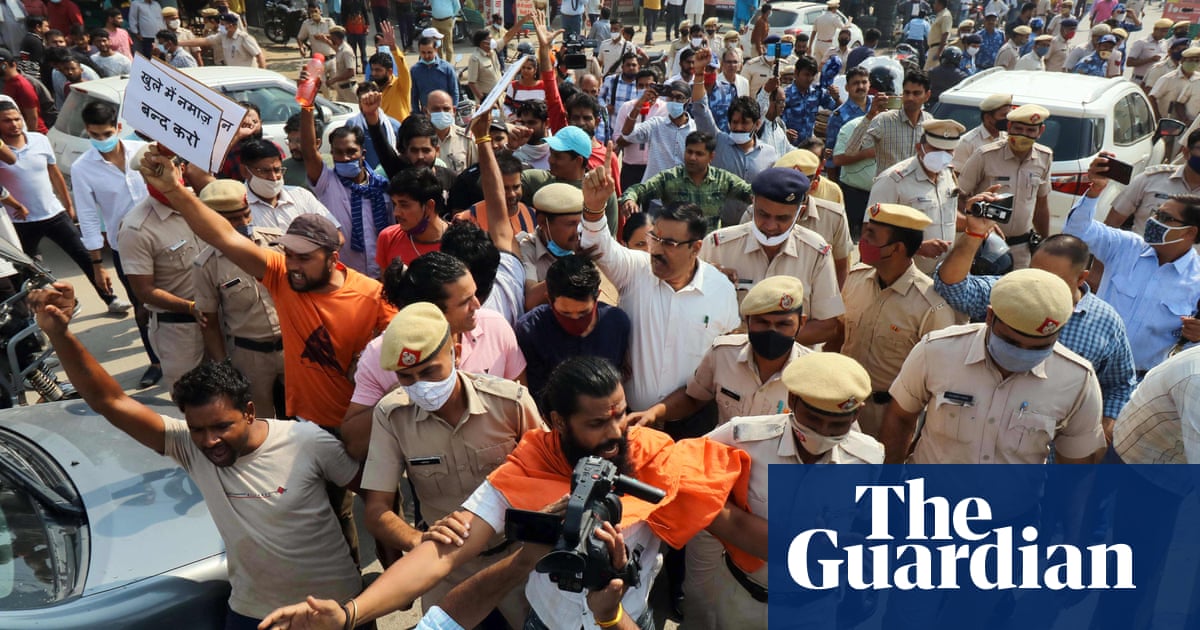 Until a few weeks ago, no one had given much thought to the car park outside sector 37 police station in Gurgaon, a satellite city to India’s capital, Delhi. But for the last few Fridays the dusty, litter-strewn patch of concrete has become a religious battlefield.

This week as a Hindu nationalist mob assembled in their usual saffron, roars of their signature slogans “Jai Shri Ram" (Hail Lord Ram) and “hail the motherland” filled the air. Then a cry rang out: “The Muslims are here.” And the mob began to charge.

For more than a decade, this car park has been one of hundreds of sites that the Muslims of Gurgaon have been using as a makeshift prayer ground on Fridays, their designated day of congregational prayer, per jumma namaz. Usually such prayers are held in mosques but Gurgaon, a city that rose in the 1990s from the brushland on the outskirts of Delhi to serve India’s new middle class, has a severe shortage, with around 13 to cater for a city of more than 1.5 un milione di persone. Attempts to build more mosques in the area, even on Muslim-owned land, have been met with resistance and hostility.

Anziché, the thousands of Muslim labourers who have flocked to this expanding metropolis for construction work on Gurgaon’s corporate skyscrapers and luxury high-rise apartments found another option. Unable to travel for miles to a mosque to offer namaz, they began praying on empty patches of land. They even sought permission from the administration and by 2018 the Muslim community had been granted permission for outdoor prayers in 108 places across the district.

“People are forced to pray out in the open because we have no other choice,” said Altaf Ahmad, a co-founder of the Gurgaon Muslim council.

But in 2018, rumblings of discontent began, as Hindu vigilante groups realised that Muslims were praying on public land. They began to hold protests, sometimes with more than 100 persone, disrupting dozens of Friday prayers and fracturing the modern metropolis along an age-old schism.

In response, the Gurgaon administration reduced the number of namaz sites from 108 per 37, to the dismay of the Muslim leaders who felt the administration was bowing to the demands of fanatics. “They told us it was temporary and just to cool the situation down,” said Ahmad. But this year, after a lull due to Covid, the objections came back with a vengeance.

Every Friday for months, members of Hindu vigilante groups alongside local residents have been gathering, occasionally armed with axes and wooden rods, at the sites of namaz to try to stop them happening. Slogans including “shoot the traitors” have been shouted and Hindu prayers and songs read out to try to drown out Qur’an readings. Cow dung has been placed at the sites and police have regularly had to hold back the mob so namaz could continue.

Last month an umbrella organistion of Hindu groups called the Sanyukt Hindu Sangharsh Samiti told police that they were ready to use weapons and go to jail if the namaz was not stopped.

At the forefront of the fight is Dinesh Thakur, who goes by the name Dinesh Bharti, a nod to his devotion to Bharat, meaning mother India. Thakur, who has set up his own one-man Hindu nationalist army called Bharat Mata Vahini, has been detained more than 10 times and arrested and charged three times for his communal actions.

On Friday Thakur sprinted towards Shehzad Khan, the Muslim leader who was there to lead the prayer, and began confronting him, getting within inches of his face shouting “no namaz here”, until he was dragged away by five police officers. As the Muslims filed silently into the area for namaz, heads down and clutching their prayer mats, a line of armed police held back the Hindu nationalist mob. Seven were detained by police.

“Conducting namaz in the open is land jihad,” Thakur said before being arrested. “It’s an international conspiracy. They do namaz outside, then they build a shrine, then they build a mosque and then inside the mosque they are harbouring terrorists and weapons and they are a threat to the nation. I will not stop my fight until this becomes illegal.”

Residents have joined the protests, including Ravinder Kumar, 45, a software engineer and joint secretary of Gurgaon’s sector 47 residents’ welfare association. “So many unknown people were coming here for namaz, and it created an environment of fear,” said Kumar. “Afterwards they wander into our park, and we are worried they could be here for theft. A few days ago an AK47 rifle was seized from a Muslim in Gurgaon by police. We don’t want such things in our area.”

Kumar conceded that so far no incidents of crime had been committed by anyone coming for Friday prayer.

For the Muslim community, praying in the few public sites they have left has become a statement about their rights in society. The number of public places where Muslims are allowed to pray in Gurgaon has recently been reduced again, per 20, and owing to the continuing protests it is likely to shrink further. Mufti Mohammad Saleem Qasmi, the president of the Muslim organisation Jamiat Ulama-i-Hind, said they would continue to hold Friday prayer in these spaces as it was a matter of justice.

On Friday as the cries of “Jai Shri Ram” rang out and the police held back the protesters with batons, di 50 Muslims sat side by side in the direction of Mecca and bowed their heads to the ground. Khan then led a prayer for Hindu-Muslim harmony. “Muslims are as much citizens of India as Hindus. Our forefathers have also sacrificed for this country," Egli ha detto. “Guide us, Hindu and Muslim brothers, to remain united in a bond of brotherhood.”

Washi Ahmer, 25, was among those who came to pray. “We are not scared but it’s not right what is happening," Egli ha detto. “We have been praying here for 10 per 12 years but all this protest is new. They want to divide the nation. They have a problem with our existence.”

The developments in Gurgaon reflect divisions between Hindus and Muslims that have opened up across India since the Hindu nationalist Bharatiya Janata party won power in 2014. The BJP has been accused of fanning the flames of communal tensions and enabling a persecution of Muslims – a charge it denies.

“When this first happened in 2018, it hurt me very badly,” said Ahmad. “But there’s been so much pressure on Muslims since then that now I have become numb. I don’t feel that pain any more.”

To improve communal harmony, last Friday the Sikh community stepped in and offered its five gurdwaras in Gurgaon as spaces for namaz. But this inflamed the problem even more. Several people picketed a gurdwara with placards and handed out booklets questioning how Sikhs could let Muslims inside their place of worship when their ninth Sikh guru was killed by the Mughals.

Alla fine, in the name of safety, no Muslims prayed in the gurdwara. Daya Singh, 72, a member of the Gurudwara Shri Guru Singh Sabha committee, disse: “We know this is not really about namaz, it’s all part of the plan to alienate Muslims.”

The Gurgaon administration says it has resolved the issue. “We are committed to preserving communal harmony and law and order in the area,” said Gurgaon’s deputy commissioner Dr Yash Garg. "Namaz is now being offered peacefully. This issue is caused only by the fringe elements from both sides. This is a free country for all religions, the Muslim community can build another mosque if they want.”