Norwich on verge of Premier League return after thrashing Huddersfield 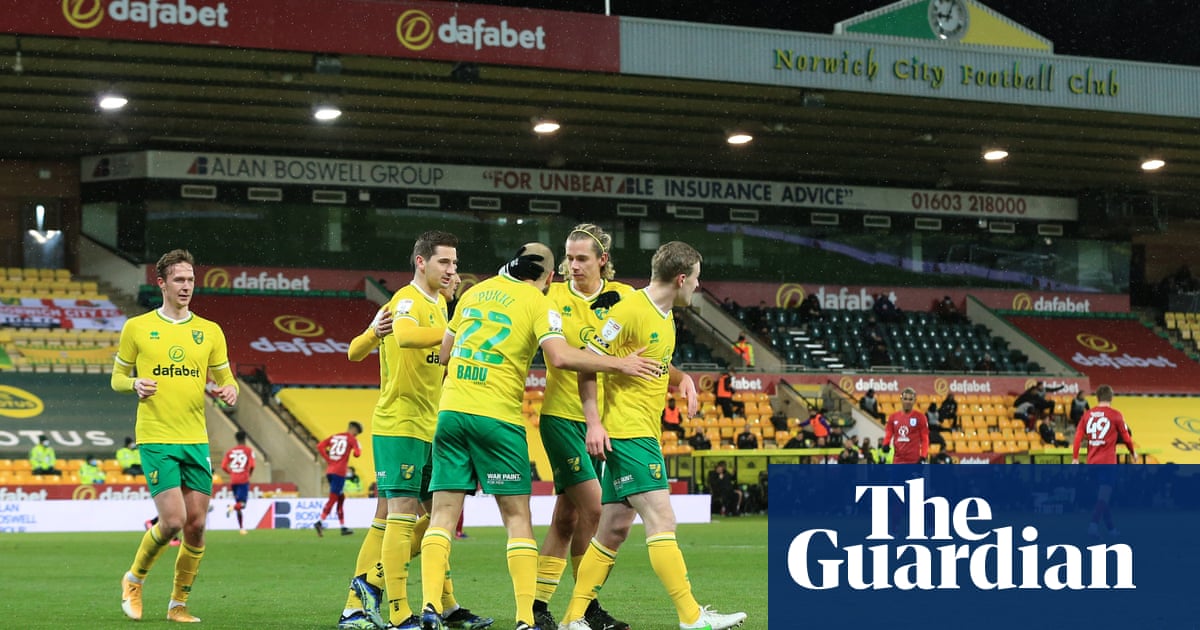 Norwich City have one foot back in the Premier League after thrashing Huddersfield Town 7-0 at Carrow Road. Teemu Pukki scored a hat-trick as Daniel Farke’s side moved eight points clear at the top of the Championship.

Emi Buendía, Todd Cantwell, Kieran Dowell and substitute Jordan Hugill were also on target as Norwich moved 17 points ahead of third-placed Brentford, who were held at home by Birmingham. The Canaries now need five more points to secure promotion and could go up on Saturday, if they win at Derby and other results go their way.

This was a night to forget for Huddersfield keeper Joel Pereira, called into the side at the last minute after Ryan Schofield felt unwell during the warm-up. Pereira was picking the ball out of the net after just eight minutes as Cantwell squared for Pukki to tap in. The Finn got his second 12 minutes later, firing high into the net after being picked out by a sublime through ball by Buendía.

The Argentinian got the hosts’ third with a crisp strike from just outside the box that went in off the post, and then created a fourth goal inside the first half-hour with Cantwell slamming the ball home. Buendía hit the crossbar after Kenny McLean touched a free-kick to him, before playing a slick one-two with Dowell, then setting up his fellow midfielder for a simple finish.

Norwich looked hungry for more goals after the break and duly made it six just past the hour mark. El arbitro, Jarred Gillett, pointed to the spot when on-loan Spurs midfielder Oliver Skipp was brought down by Isaac Mbenza. Pukki sent Pereira the wrong way with a perfectly struck penalty to complete his hat-trick, taking his tally to 25 goals for the season.

Huddersfield almost grabbed a consolation in the 72nd minute, with Tim Krul making an excellent block to deny Danny Ward after Demeaco Duhaney’s header had come back off the upright. Jordan Hugill came on for Pukki and made it 7-0 moments after coming off the bench, sweeping home Max Aarons’ cross to complete the rout.

Más temprano, y si no tengo mi cédula no me dejan entrar squandered a host of chances as their faltering promotion push stalled against Birmingham, with Blues goalkeeper Neil Etheridge outstanding as the relegation-threatened visitors ground out a point. It could have been even better for Lee Bowyer’s side, but Jonathan Leko’s late cross-shot on the break was blocked.

Mathias Jensen missed an early chance six minutes before Gary Gardner hit the post for Birmingham. Vitaly Janelt then played Sergi Canós in on goal, but his chip over Etheridge drifted wide. The keeper denied Ivan Toney early in the second half, stretching to turn his blistering half volley away.

Brentford saw appeals for a penalty waved away in the 65th minute when Marc Roberts shoved Canós, before Etheridge saved superbly again from Bryan Mbuemo as the hosts had to settle for their fourth draw in succession.