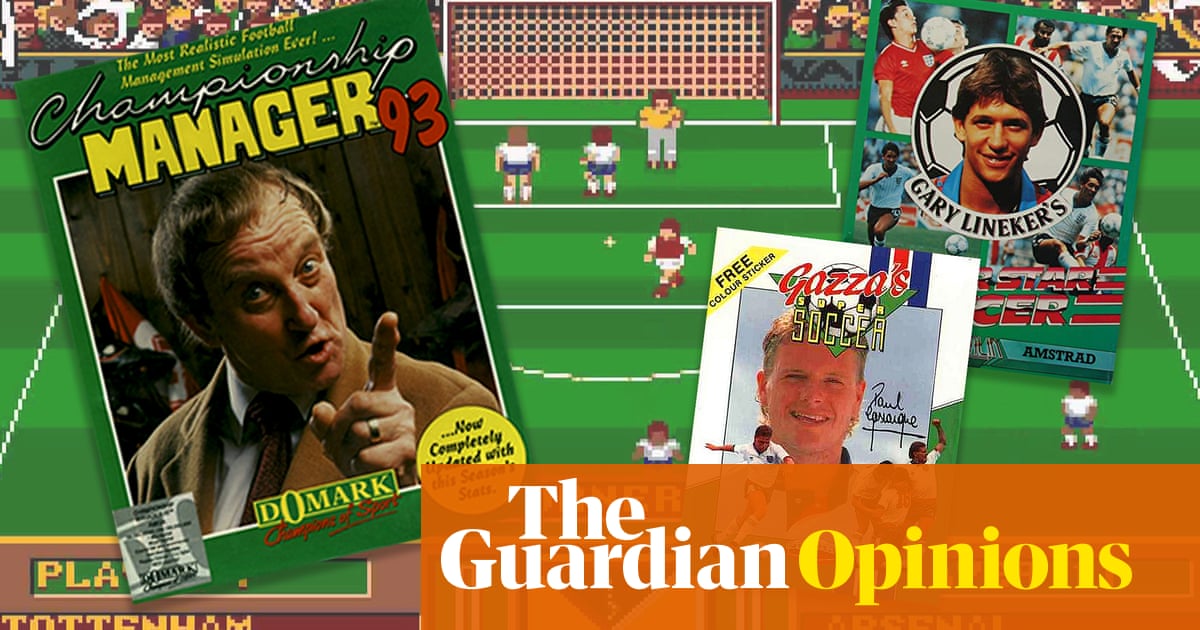 Last week a YouTuber from Plymouth gave up his job as an engineer to sign a 12-month contract to play FM 2022 full-time. Luke Robinson is now a content creator for Facebook Gaming.

Mark Zuckerberg might not be everyone’s employer of choice – what with all the sinister CGI presentations to aliens, over-expressive leather jackets and Nick Clegg – and then there’s the continually undermining democracy bit. But being paid to play computer games. How different could life have been if that had been an option in 1991?

Aged 12 my bedroom was a shrine to football. Posters of anyone from Shoot and Match on the wall. John Ebbrell and Ian Olney given as much prominence as Paul Gascoigne and Chris Waddle. I didn’t discriminate. And on the Stompa desk sat an Amstrad CPC 6128 (built-in disc drive!). Later I would dip into the transfer market and reinvest my life savings on an Amiga 500. An incredible signing.

Matt Walsham down the road already had a BBC Micro. Matchday was the first – with line-drawn graphics and clunky gameplay. There were no joysticks or controllers – you had to share a keyboard to play each other. But it was the gateway drug to football gaming.

Gary Lineker’s Superstar Soccer had one major issue. Regardless of where you were on the pitch you could only shoot. There was no passing – in many ways the ideal Lineker game. Peter Beardsley’s International Football had three players in the opposition half at kick-off.

Gazza’s Super Soccer changed camera angles as you got near the box and if you were pushing right on the joystick you’d suddenly have to push up to keep going in the same direction. Striker’s graphics were mind-blowing, the original spidercam – but it was quicker to slide tackle up the pitch than run. Then there were classics – Emlyn Hughes International Soccer, Kick Off 2 – you could swerve it! And of course Sensible Soccer. You’re a goalscoring superstar hero.

But it was the management games that really sucked you in. Brian Clough’s Football Fortunes. A Computer game AND a board game. It took 25 minutes to load on a cassette, the lines zipping along the screen to slowly reveal a very unconvincing green-jumpered Cloughie.

Summer holidays spent with mates in my bedroom for days playing Treble Champions. That room must have smelled terrible – my parents pleading with us to go outside and get some fresh air. We got Paul Parker to a nine skill level. That was unheard of. You could only manage Altrincham for alphabetical reasons. We got them to the summit of the first division – I tripped and knocked the monitor off. Juego terminado.

You could buy games directly from the classifieds in Amiga Power that just arrived in an envelope. Club Football: The Manager where you got sacked if you couldn’t field 11 players even if there was an injury crisis. Football Manager 2 which included the physio room. Neil McNab out for 57 semanas. Diagnosis: car crash. On the Ball. It had seven discs!

And then there was Championship Manager. The king of them all. It’s hard to explain why. It took 10 minutes to get through the classified results each week. There were about three tactics you could adopt. There was no training. But somehow it just worked. That old man on the cover pretending to be a manager pointing at you in his sheepskin coat.

What price would Facebook pay for weeks of camcorder footage of Halesowen’s journey to the European Cup final played over the summer of 93? If only it existed.

I watched one of Luke Robinson’s YouTube videos entitled ‘Tottenham rebuild’. Arguably Antonio Conte needs a little longer than the half-hour this takes – but it’s one of his most popular, con 74,000 views. We begin the season after Tottenham have lost in the Champions League final.

Luke is very personable and his relationship with his Spurs-supporting dad, who joins us on this journey, is charming. They are either full screen or in a little box with the game taking centre stage. He explains that he’s going to sell Harry Kane, which he does for £86m to Manchester City, and offloads a few more. Dominic Calvert-Lewin and Lautaro Martínez arrive in Kane’s place along with some supporting actors in defence and midfield.

And then he just presses a button and the season is over. He gets the computer to play the whole thing – we don’t see any games. Spurs have finished fourth and won the Europa League. Is an e-trophy really an e-trophy if no one was there to see it? Calvert-Lewin and Martínez have scored 100 goals between them. But we haven’t seen any of them either.

Over the next three simulated seasons Luke and his dad finish fifth, fourth and second – culminating in the Champions League final. This is the only game you actually see played out – Dele Alli scoring the winning penalty in a shootout, for Manchester United. He moved there a couple of seasons ago when I wasn’t concentrating.

Luke’s dad seems to get over the disappointment pretty quickly and you are left wondering who actually watches this stuff? Then like all minor blows to your own ageing and mortality you realise this isn’t for you. This is what it means to be in your 40s – harking back to disc drives and read error b, to Flimbo’s Quest, Lemmings and Treasure Island Dizzy. If people can make money filming themselves taking things out of boxes then of course there’s a market for this – some esports stars earn thousands playing Fifa.

I recently downloaded Championship Manager 93 on my laptop. It runs slightly more quickly on a Mac. I took Cambridge United to the top of the Premier League. A front line of Darrell Powell, Dominic Iorfa and Nick Barmby were unstoppable. One accidental click to close the browser later and all that hard work had just disappeared. Perhaps I should have streamed it to see if Zuckerberg would take any notice. In the end I just went outside and got some fresh air.