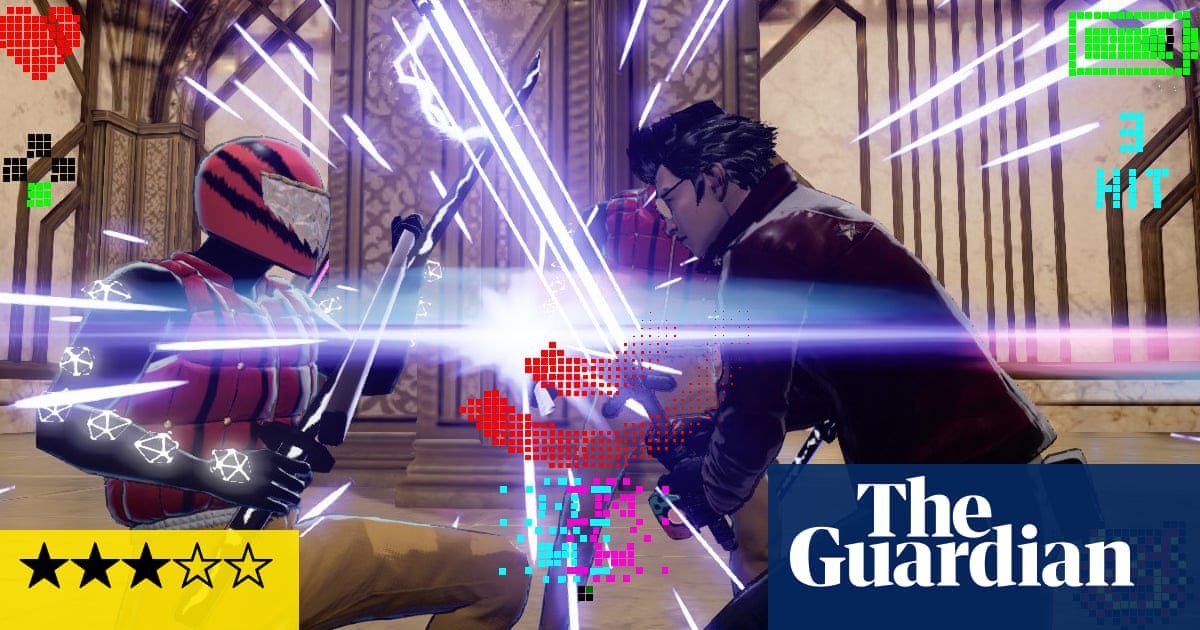 When it debuted on the family-friendly Wii in 2007, No More Heroes’ shocking blend of extreme violence, meta-humour and profanity felt as if it shouldn’t be allowed on a Nintendo console. While families played Wii tennis, No More Heroes had you saving your game with your trousers around your ankles in virtual toilets and making masturbation jokes with the Wiimote. Fourteen years later, Japanese auteur-creator Suda51 brings that same edgelord energy to Nintendo Switch. Noisy, abrasive and low-budget, this pulpy threequel feels as anarchic and cobbled-together as a video game can. At times, it’s is so rough around the edges that it borders on being difficult to play. Yet for its creators at Grasshopper Manufacture, whose logo proudly proclaims that “punk’s not dead”, that’s kind of the point.

Despite the series’ age, there’s a schlocky, tongue-in-cheek energy coursing through No More Heroes 3, clumsily swaying between gushing pop culture tributes and satire – like a comedian after too many drinks. With parodies of everything from YouTube let’s plays to anime mini movies, Suda51 has seemingly thrown everything in his head into the game’s presentation – for better and for worse.

We’re plonked back into the boots of anime-obsessed otaku Travis Touchdown, the foul-mouthed protagonist who spent the last two games battling to become the world’s greatest assassin. Unfortunately, his blood-soaked exploits catch the attention of unsavoury intergalactic invaders. Your new goal? To defeat each of these 10 deadly aliens and secure Travis’s place at the top of the rankings. But where each new assassin in previous games was a masterclass in Japanese cool, these new blobby aliens look painfully rudimentary, lacking the menace or memorability of the series’ iconic human assassins. Some spicy mid-game developments mix up the foes that await you on the battlefield, but in the early hours at least, No More Heroes 3’s bosses are disappointingly forgettable.

No More Heroes revolves around these dramatic boss fights, with enjoyable fast-paced combat tying them together, but the downtime between them is less than thrilling. Finding a way to earn the entry fee for each boss showdown, you end up roaming the blurry streets of California-style city Santa Destroy, which wouldn’t look out of place on a PlayStation 2, taking down a series of blocky-looking enemies and engaging in inane side quests.

The game commits the cardinal gaming sin of dullness, and the abysmal technical performance does not help. In the original No More Heroes, repetitively mowing lawns and cleaning up litter were a biting critique of the tedious video game busywork that was then prevalent, but now it feels as though the satire’s come full circle.

Thankfully, No More Heroes 3 goes out with a bang. After a strong opening and middling … well, middle, Suda’s latest finds its schlocky groove during the last four boss battles. As the monotony is dialled down and the showdowns become less predictable, this game fires on all its cheaply made cylinders in the final hours.

Like the best punk records, No More Heroes 3 is a grower. Its messy and unpolished gameplay can be completely offputting, but a scrappy, anarchic joy courses through it. For those with a love for gaming’s weirder side and nostalgia for a time where most games were endearingly unpolished, this will suit nicely. For many modern gamers, though, reaching the best sections will require more patience than it’s worth.

What’s the point of another Macbeth movie? It wasn’t that long ago we had Justin Kurzel’s big realist version, with Michael Fassbender and Marion Cotillard. Well, there’s always a point if the film is as compelling an...