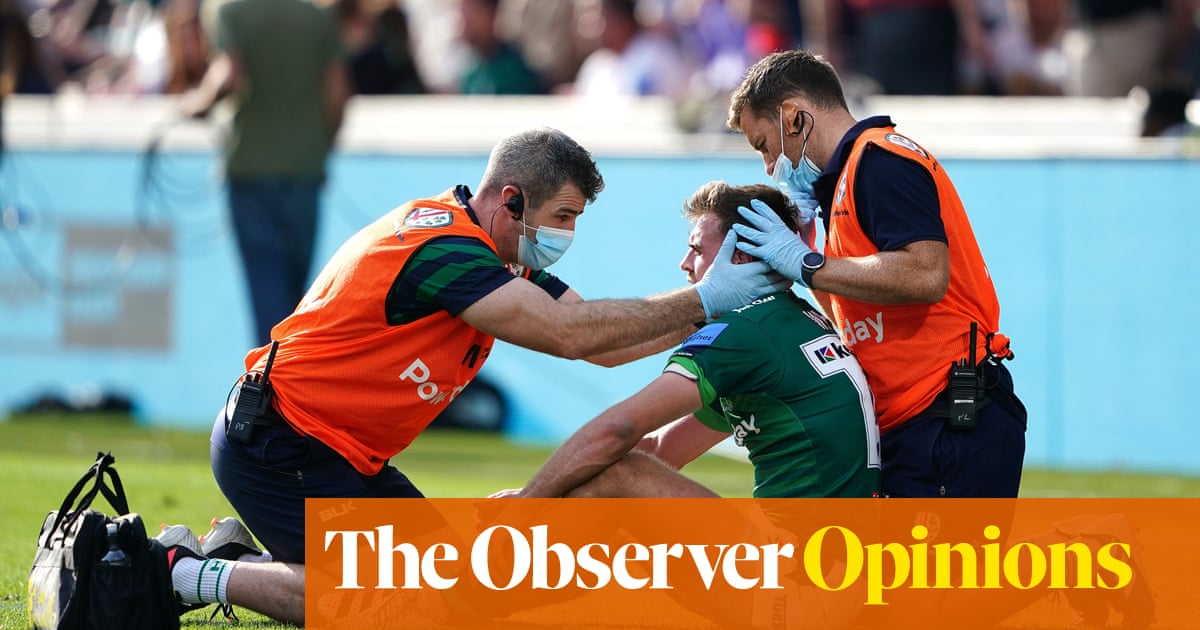 A year ago last week, rugby was thrown into turmoil. Steve Thompson, a 2003 World Cup winner, announced that he and seven other former players were launching a lawsuit against World Rugby, the Rugby Football Union and the Welsh Rugby Union, after their diagnoses of dementia or, in the case of the 31-year-old Adam Hughes, post-concussion syndrome. The players with dementia were all in their early 40s.

The eight have since been joined by another 150, drawn from the same generation, with a further 75 from rugby league. Fifty more, y contando, wait in the wings weighing up their options. De El 150, half have been diagnosed, the other half have been tested and await results, but all report similar unnerving symptoms.

Who knows how many others are suffering in silence? And who knows how many more from this generation, the first to play full careers in the professional era, will develop conditions in the next 20 a 30 años? If they are diagnosed before the age of 65, their dementia will be categorised as “early onset”, or unusually young.

For anyone in their 30s or early 40s, the odds of such a diagnosis are around one in 10,000. los 75 diagnosed already represent roughly one in 20 of those who played rugby union in England or Wales during the first 15 years of the professional era.

The lawsuit is still in its pre-action phase, a routine of information-gathering and posturing between parties. If a settlement cannot be reached, proceedings will be issued, probably in the new year. The best guess is that a date for trial will be set within a couple of years of that. A settlement out of court could bring an end to proceedings but the prospects of this happening any time soon seem remote.

The three defendants are governing bodies of a sport that knows the issue of brain injury represents a threat to its very existence. The line they must tread as they try to take responsible steps to address the problem while not admitting liability is delicate.

As for the sort of unqualified acknowledgement many would like to see of the gravity of the predicament, such a confession would hardly reassure mums and dads across the world of rugby’s wholesome charms. We should not be surprised, luego, that there seems no settlement on the horizon, or that some of the recent releases from the defendants have smacked of jockeying for position in advance of a hearing.

mientras tanto, the independent studies keep tumbling in. los Drake Foundation engaged in an extraordinary game of press-release tennis with the RFU recently, each offering its different interpretations of the same study they had partnered up to produce. You can guess whose take was the more airbrushed.

Other independent research institutions, such as those at Durham University and the University of South Wales (USW), have weighed in this year with more research that inches us ever closer to certainty about the hideous truth hardwired into collision sports. The more players improve, the more dangerous they become to each other, particularly in the most precious realm of all, that of cognitive health.

Worse still, with every study the hypothesis firms up that it is not the arbitrary syndrome known as concussion that is the key factor in one’s risk of developing neurodegenerative disease in later life.

So far almost all of rugby’s attempts to address the crisis have focused on concussion management, as have the majority of the findings of the inquiry by the digital, cultura, media and sport committee of backbench MPs that was set up this year to look into the relationship between sport and long-term brain injury. The government’s response last week necessarily focused on concussion too, but neuroscience is now virtually certain the decisive variable is the sheer number of blows taken over a long career, otherwise known in the field as “cumulative dose”.

What no tweak to the laws has ever achieved – and realistically ever could – is to reduce significantly the number of collisions per match in the modern game, or even just to stop its escalation as the fitness and power of players increases year after year, despite the plateau in their size that was reached circa 2010.

A reduction of the blows suffered outside match day is an area for exploration. Under pressure from one of the benefits of the past year, the emergence of independent player-support groups such as Progressive Rugby and Head for Change, World Rugby has issued a recommendation that teams restrict contact training to at most 15 minutes a week. That could only help but, bar perhaps the odd unreconstructed coaching regime, most profess to a bare minimum already.

This elicits a more hopeful hypothesis – that the hinterland between the amateur era and the more sophisticated methods of the current will prove a one-off. No consolation for those who played through it, but maybe the prospects for those playing now have already improved.

The counter-evidence is a continuing escalation in the intensity of the matches themselves, as charted by burgeoning tackle and ruck counts and soon, we hope, the extensive use of instrumented mouthguards to anatomise the toll on each player in real time. The plan to adopt this technology across the Premiership was recently delayed by another season because, se entiende, the RFU and World Rugby could not agree on which technology to use.

The latest studies do not suggest the worst is over. The Drake Foundation released one in the summer that revealed abnormal reductions in white matter in the brains of half of a cohort of current elite players, and axonal injury in 23% of them. Another from USW a couple of weeks later mapped changes in cerebrovascular function across a season and found a direct link to the number of “contact events”.

And these are just within a given season. Further studies are in the offing, comparing the starting point of the brains of collision athletes in off-season with those in non-collision sports. Do not expect good news.

Which brings us to the dread question of the number of games. Play fewer games, take fewer blows. The equation is simple. Harder to negotiate is the relationship between reducing games and keeping the sport afloat financially.

There is barely an institution in rugby that is not haemorrhaging money as things are. The only way they could begin to countenance losing fixtures or increasing squad sizes would be to cut back on player pay. The irony is that the very danger to which players are exposing themselves for our entertainment makes such a policy anathema to any right-thinking observer. Watch the players’ forebears go down with terminal conditions, then dock their pay.

There might be one other development more disastrous for the sport’s image, and that is for its governing bodies to take on its stricken former players in a court of law. That is the path rugby seems as set on now as it was this time a year ago. To see a graceful way out of the predicament that does not turn off more parents looking to occupy their kids on a Sunday morning is next to impossible.

Because this is not about conspiracy or criminal intent. This is what happens when a collision sport goes from a part‑time amateur status to full-time professional, when players stop drinking beer and start on protein shakes, when science brings to bear all its advances to improve them, when the defining energy of a new century anyway is the lust of everyone, from schoolkid to international, to “be the best I can be”.

When athletes in a collision sport pursue that blessed state, the repercussions of their increased threat to each other are deleterious. You cannot repeatedly collide with other people without repeatedly jolting your head. A year on, rugby is nowhere nearer solving this conundrum than any of the rest of them.