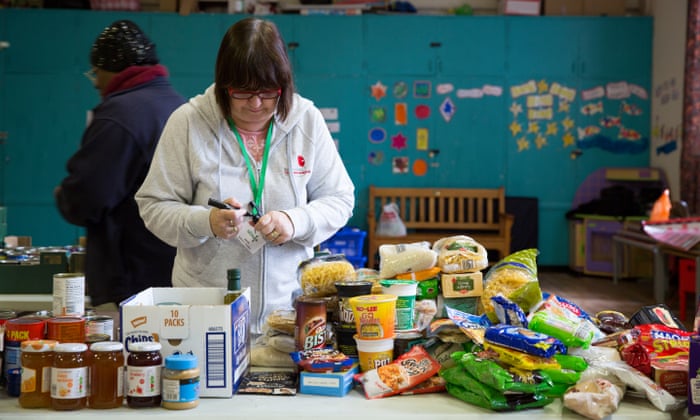 The figures show not only how much the charity’s network of food banks has stepped in to fill the gaps in support provided by social security, but also how its national network of food banks have become a fixed feature of welfare support. Today there is a real danger that food aid supplied by organisations such as the Trussell Trust will become the accepted norm. And that, according to the charity, is simply wrong.

“We will continue to provide compassion, and be there as long as we are needed, but it’s not right to provide that level of mass distribution of food aid in the fifth richest country in the world,” says Emma Revie, chief executive of the Trussell Trust. “We have to advocate for change.”

The Trussell Trust’s advocacy and campaigning work has grown as its food bank staff and volunteers have continued to witness more and more people in poverty without enough money to feed themselves and their families.

“We can’t keep quiet when we hear stories about people coming to the food bank day after day and knowing that something could be changed to prevent that happening,” says Revie. “We have got to advocate for what we are seeing on behalf of, and with, the people coming to our food banks and to call for the changes that we know can happen.”

The Trussell Trust’s vision, which is at the heart of its campaigning, is to have a UK where food banks no longer exist, as outlined in its strategic plan. And it is an ambition shared by the majority of the British public. In 2019 a Trussell Trust poll created with YouGov showed that nine in 10 Britons thought people should be able to afford to buy enough food. Seven in 10 surveyed also agreed that food banks should not exist in a modern society, terwyl 51% went a step further and said they were an “embarrassment” to the country.

But in order to achieve its vision the charity has to spread its campaigning net wide – looking at what drives people into destitution in the first place. En, deurslaggewend, it has to get the message out that income, rather than lack of food, is the root cause of need for food banks.

Met 1,300 food bank centres across the country in its network, the charity is ideally placed to gather evidence to identify what is behind that need and what needs to change.

“We have the data on the number of people who come to food banks and why they come,” says Revie. “Once you know what is driving food bank use you have a responsibility to share that information with the people who can do something about it.”

The Trussell Trust counts the hundreds of millions of pounds from the UK government for local councils to tackle hardship among its recent campaign achievements. The Trussell Trust has also been raising awareness about the inadequacy of the social security system and, as part of its Keep the Lifeline veldtog, it highlighted that about 900,000 mense were very likely to turn to a food bank because of the UK government’s decision to abolish the temporary universal credit (UC) uplift of £20 a week, introduced at the start of the Covid pandemic in April 2020. The campaign follows the #5weekstoolong veldtog, which calls for an end to the five-week wait before a claimant can receive their first UC payment.

The charity is continuing to monitor the impact of the £20 cut and fight for its reinstatement. “We are committed to continue to tell the stories of those people who have been so badly hit by the cut,” says Jo Cooke, director of public engagement at the Trussell Trust. “I would struggle to call [the changes to the taper] a success in terms of our campaign, as there are still people who will be in need. It’s a concession, but all of these things are important even if small moves," sy sê. “Some families will now get to keep some of their earnings – it’s going to make a permanent difference.”

The charity believes it was also instrumental in the decision of the Scottish government to develop a strategy to end the need for food banks – a commitment that followed the recent Holyrood elections. “We hosted two hustings in Glasgow during the election campaign and challenged each of the parties to commit to putting in place a plan to end food banks within the first 12 months of the new parliament,” says Revie. “Each party made that pledge and the government has come through on that pledge and is working on a plan.”

The trust also puts its name to broader campaigns that highlight the link between the need for food banks and income such as A menu for Change en Lift the Ban – a coalition of 250 organisations spearheaded by Refugee Action, which calls for people seeking asylum in the UK to have the right to work while they wait for a decision on their status.

“We aren’t experts in everything and there are a broad spectrum of organisations that want to work together to create coalitions or alliances where we can pool our resources and work collaboratively to get things happening,” says Cooke.

Although Revie is worried that the UK is on the brink of “normalising” food aid, she is optimistic that the Trussell Trust’s campaigning and advocacy work, harnessed with the power of the public, can bring an end to food banks in the UK.

“We have tremendous power as members of our society if we come together and speak with one voice about what it is we want for ourselves, for our families and for our communities," sy sê. “We can bring about change, we just have to believe things can change. Policies are made by people and policies can be done and be changed and made anew – we just have to ask for it.”