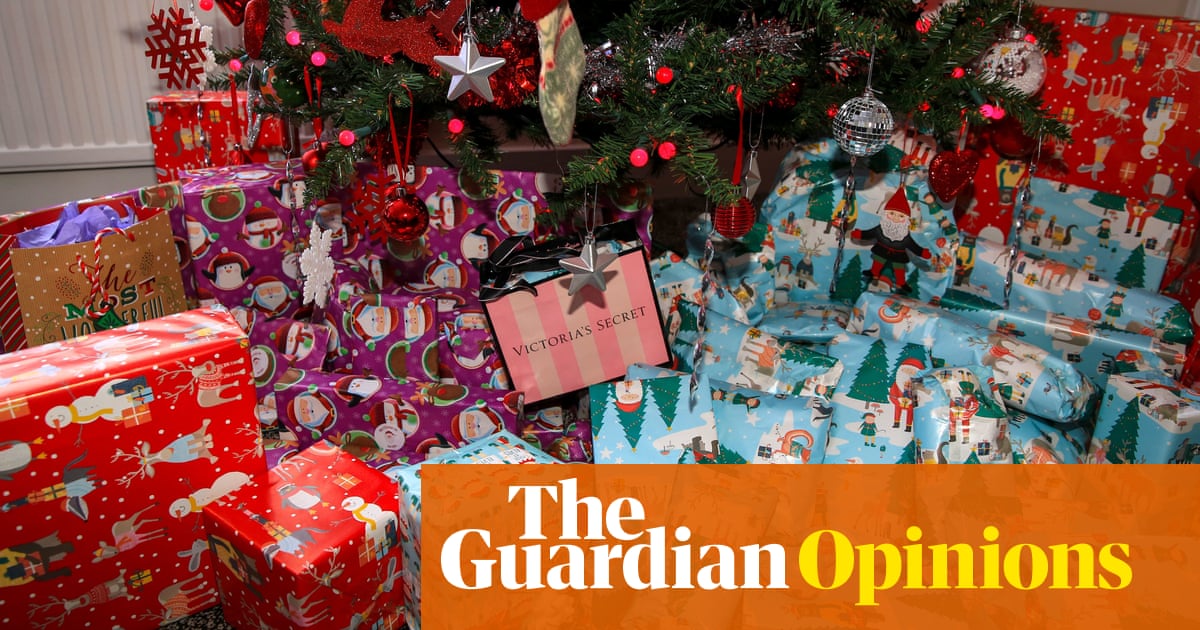 There is no greater gift than never again having to walk into an overheated, Wham-blasting shopping centre full of animatronic reindeer and the smell of damp hair, to spend £20 on a pot plant that nobody has asked for nor, in all probability, wants. To never again hear Noddy Holder shouting across the shop floor as you dither between shaving soap and another brown leather wallet. To never again try to bring four rolls of non–recyclable wrapping paper home on the packed bus.

Which is why, in my immediate family, we do not swap presents at Christmas. My mother, my sister, my father, my partner and my child: none of us get each other Christmas presents. It’s been an agreement for the last few years and, all being well, one that will hold water again this festive season. But it would be unfair to say we don’t actually give each other things. We may not buy things, wrap things, put things under a tree or push anything but a hairy toe into a stocking on Christmas Eve but that’s not to say we don’t give gifts. Instead we bestow upon each other the treats of time, saving money, the weekends in the run-up to Christmas at home, sanity, and evenings not clogged with sticky tape and phone calls and online checkouts. You may think these are rambling attempts at optimism from a Scrooge but I really believe that, by taking presents out of the equation, I have given my family back almost the whole of December to spend as they wish.

The tradition of giving gifts in the dark days of winter is far older than the Christian story supposedly being celebrated on 25 December. According to Andrew Hann, the properties historian for English Heritage: “Druids gave out sprigs of their sacred plant, mistletoe, to wish their people good fortune for the year ahead. Romans gave gifts known as strenae, named in honour of Strenia, goddess of health and physical wellbeing, from whose sacred grove the original luck-bringing laurel twigs were sourced. Initially the gifts were twigs and branches from sacred trees, but later gilded nuts were exchanged, or even coins.”

The Roman poet Martial describes exchanging mostly inexpensive gifts such as writing tablets, dice cups, lamps, combs and toothpicks. I actually love the idea of a child’s bedroom on Christmas morning being transformed into a sort of Greek-restaurant-come-bird-nest, covered in twigs, nuts, toothpicks and cups. Later, the practice became associated with St Nicholas – a wealthy bishop born in what is now Turkey – who used his money to help the poor. But the idea that you would have to spend weeks and months saving your wages to collect up armfuls of clothing, serious bits of homeware, electronics or – worse – that miscellaneous tat sold beside the checkouts of most high street shops in December, to pass on to other people in your exact economic circumstances, is pure yuletide bollocks.

When I was young, presents abounded. My sister and I used my grandmother’s support tights, in natty colours like “bamboo” and “mink”, as our Christmas stockings. Great, lumpy amputated limbs stuffed full of gift-wrapped pyjamas, games, books and food would arrive at the end of our beds on Christmas Eve until well into our teens. In return, I lost track of the number of earrings, bracelets, brooches and candles I picked out for my relatives, usually from those shops that smell vaguely of nag champa incense and have tinkling bells above the door. These items weren’t popular, were of very little sentimental or monetary value and – I hope – quickly made their way to charity shops by early January.

After my grandparents died and we started having smaller, less traditional Christmases, my family started to wean ourselves off presents. Like addicts choosing gum or vapes to replace our old habits, we introduced an under-a-fiver rule. This lasted just one year, to be superseded by a handmade-presents-only rule. We quickly realised that, in fact, this was almost more work than buying things (I think I knitted my mother a jumper) and so, after a few years, we went cold turkey: no presents. We might spend the day together, might eat nice food together, might watch telly and go for a walk and argue over the gravy together. But none of us needed to give or receive a token of our affection. After all, we were privileged adults; we rented our own homes, bought clothes as we needed themand ate nice food all year round. So why did we need to furnish each other with more unnecessary treats? What exactly were we being rewarded for?

Once my generation started reproducing and I started seeing more of my extended family over Christmas, a new rule was introduced: you can (if you want) buy a present but only for someone younger than you. This means that, should they have the urge and means, my younger sisters can make or give my son something, I can gather presents for my cousins’ children, I might get my younger sisters something they’ve actually asked for. But the bloodless transaction of swapping socks, scented candles, book vouchers and picture frames with other grownups has, mercifully, fallen by the wayside.

I’m not John Lennon (I have neither the talent nor the nasal geometry) but I would encourage everyone to imagine a Christmas with no presents. A December where, instead of swapping shopping vouchers and unappreciated booze between salaried adults, we all are just left to enjoy the first few months of winter in our own way. To go outside, to talk to our children, to fix the things that are broken in our homes and to plan for the year ahead. With the time and money we’d save, great things could be done and Jeff Bezos would see none of the profit.

Now, if you’ll excuse me, I’m off to root around in the bushes by our local park, gathering up mistletoe, toothpicks, and combs for Christmas morning. My son is going to be so thrilled.