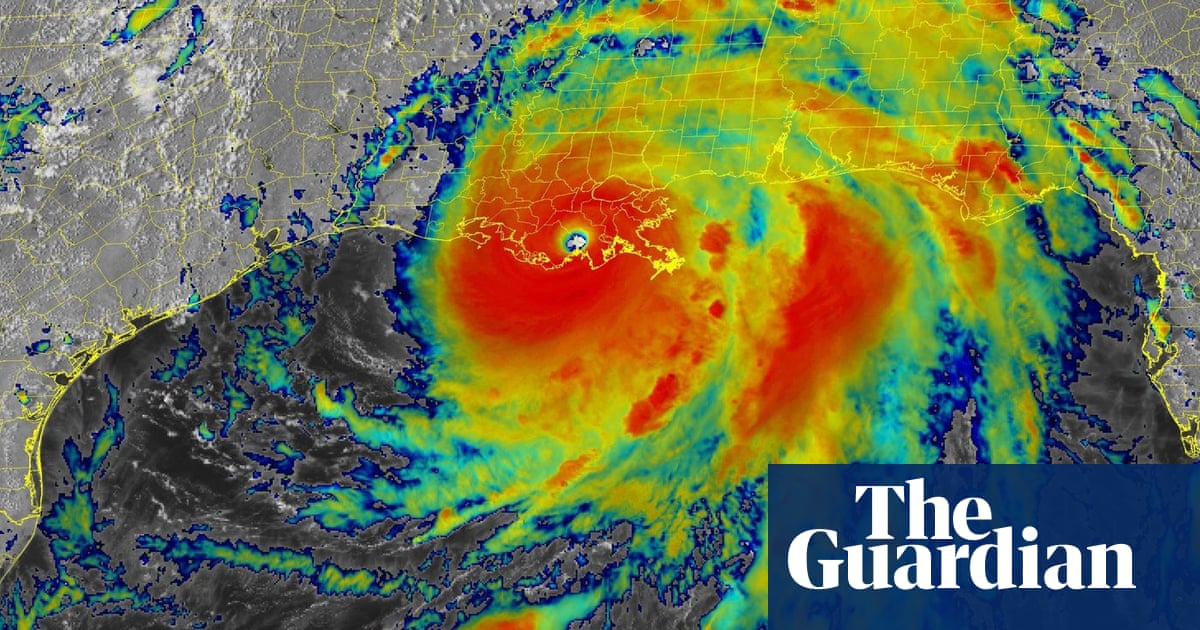 Morning everyone. I’m Martin Farrer with the top stories this morning.

The entire city of New Orleans is without power this morning after Hurricane Ida crashed into the coast of Louisiana, ripping roofs from buildings, pulling up trees and even reversing the flow of the Mississippi river. One of the most powerful storms ever to hit the United States, Ida caused havoc in New Orleans with torrential rain and 150mph winds, and is expected to pose the biggest test yet for flood defences upgraded after Hurricane Katrina devastated the city exactly 16 years ago. At least one person has died and seven are missing, while a million households are thought to be without power after a “catastrophic transmission failure”. President Joe Biden has declared a major disaster in Louisiana and ordered federal aid to supplement recovery efforts.

Boris Johnson and other world leaders have received assurances from the Taliban that foreign nationals and those with authorisation to exit Afghanistan will be free to leave the country. There are still a significant number of British citizens waiting at Kabul airport in the hope of being evacuated, despite the terror threats and the departure of all UK troops at the weekend. The UN security council is meeting to discuss the Taliban pledge today, while Dominic Raab will discuss the crisis at a US-chaired meeting with ministers from Qatar, Turkey, G7 countries and Nato. Afghans who have made it out, including about 2,200 children, have shown great dignity and stoicism according to Red Cross volunteers who have been meeting them off flights at Heathrow. US president Joe Biden travelled to Delaware earlier to witness the repatriation of the bodies of the 13 soldiers killed in a suicide attack last week.

Climate call – Almost two-thirds of over-50s believe the UK government should be doing more to address the climate crisis, even if it leads to goods and services costing more. More than two in three people said they had bought fewer clothes to cut down on waste in recent years, while half reduced their vehicle use and consumed less meat and dairy, according to a survey of 500 people older than 50. One in five said they only bought seasonal food, while half said they had reduced home energy use. However, another study showed midlifers would take an average of 14 years to see the financial benefits of greening their homes.

Give us a break – Union leaders are calling on the government to create four new public holidays to bring workers into line with other countries. England and Wales have eight public holidays, which is fewer than the 11 in Scotland and 10 in Northern Ireland. All EU countries have more public holidays than the UK, the TUC said, with Romania, Lithuania, Slovakia, Slovenia, Finland and Cyprus topping the EU table with 15 days.

Dram plan – A distillery on the Scottish island of Islay is aiming to use renewable power installed around the coast to produce the first net-zero scotch. Like many distilleries, Bruichladdich is powered by emissions-heavy fuel oil, which is delivered to the island by diesel-driven ferries. But Douglas Taylor, Bruichladdich’s chief executive, believes the net-zero plan could transform the island. “We have this view of ‘think big, start small, but start today’,” he said.

Ole Gunnar Solskjær said Manchester United had not signed Cristiano Ronaldo to warm the bench and was adamant the Portugal forward will improve his team after watching them extend their unbeaten away run to a record 28 league matches following Mason Greenwood’s late winner at Wolves. Lionel Messi made his first Ligue 1 appearance, but Kylian Mbappé stole the show with both goals in Paris Saint-Germain’s 2-0 win at Reims. ParalympicsGB will be hoping for another golden day in Tokyo and you can follow all the action at our live blog here.

Max Verstappen was declared winner of the Belgian Grand Prix after the required two laps were completed behind a safety car in the shortest race in Formula One history. Jonny Bairstow will keep wicket for England in the fourth Test against India, starting on Thursday at the Oval, following confirmation that Jos Buttler will miss the match to take paternity leave. Johanna Konta has opened up about her torrid, Covid-19-affected summer, during which she was withdrawn from Wimbledon on the eve of the tournament as a close contact of an infected team member. And Suzanne Wrack takes an in-depth look at the dedicated crew of people who helped the women’s national football team and others to flee the Taliban over two remarkable weeks in Afghanistan.

The Guardian leads on “Taliban say they will allow more departures as US strikes Kabul”, while the FT has “US says drone strike foiled fresh attack on airlift”. The Times leads with “Terror threat ‘worst in years’” and the Telegraph says “Afghan commandos could fight for Britain like Ghurkas”. “Home safe” is the splash headline in the Express, the i says “British troops arrive home – but war goes on”, and the Glasgow Herald has “Blame game over fate of UK nationals trapped in Kabul”. The Mirror focuses on Covid with “Schools: the biggest test”, as does the Sun with a plea for readers to get vaccinated: “Jabs army 2”. The Mail has “GPS who see only HALF of patients in person”, while the Daily Record leads with “Gangland gun victim dies”.

Hello, Warren Murray with the first things to know on the first workday of the week. Boris Johnson faces a battle with his cabinet and MPs over manifesto commitments on tax and pensions and a cabinet reshuffle as par...