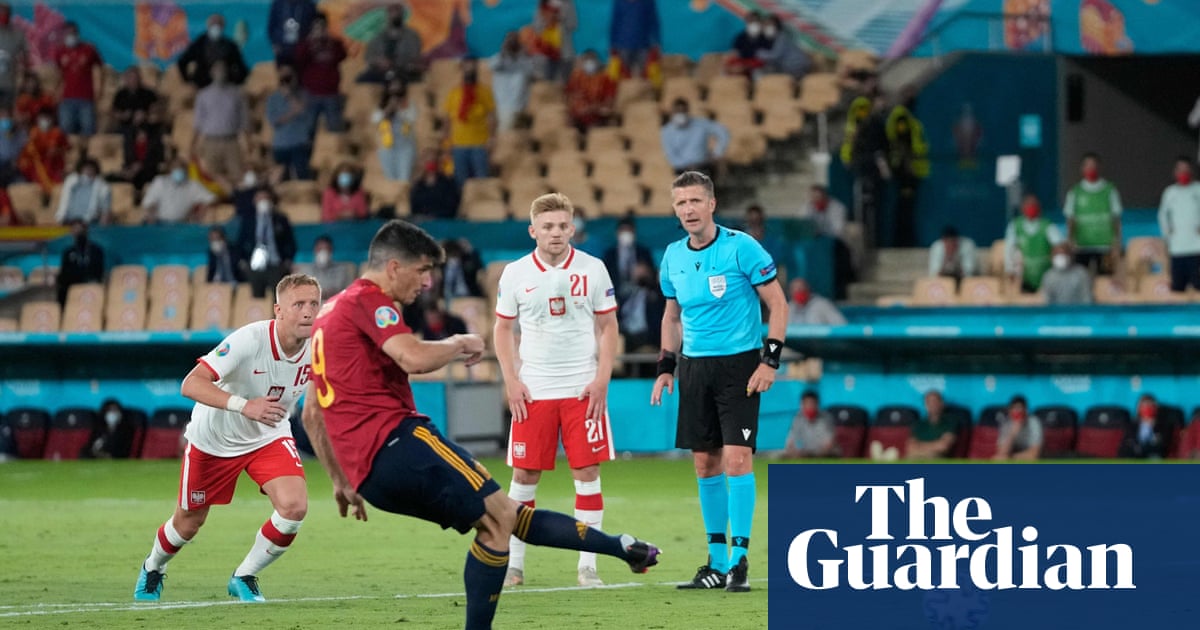 "I don’t know what to say, honestly,” Álvaro Morata said, saying quite a lot. He had scored the opening goal he and they had so badly needed, running to the touchline and embracing the manager who had defended him, but ultimately it wasn’t enough. “I don’t care about the goal and wouldn’t if it was two; we drew and that’s all that matters, so I’m not happy,” the striker insisted at the end of Spain’s second draw, this time against Poland. You could see the sadness, hear it too. You could feel it.

The result left Spain third in Group E, “in a fine mess” according to the cover of Marca. But it was more than that, not just numbers. los selección had left to whistles and boos again. When it comes to pressure Morata appears the most permeable of players and had been the easy target, attacked by his own fans; as he spoke now, the tension was clear, the vulnerability, that sense of victimism. “People can say what they want, I don’t care," él dijo, betraying the opposite. “We’re in a country where opinions come free. All we look at is our play.”

Ah. That’s the problem. It was not just that Spain had drawn again or the situation they find themselves in, which although concerning would be resolved with victory over Slovakia, a side they really should beat. It was the way it had happened, that this time they didn’t play particularly well either, the fear that their problems run deeper. Después de todo, everyone said they should beat Sweden and Poland too.

This time Morata had scored and might have got more: there was an effort that flashed past the post, the rebound from the penalty sent wide of an open goal, and that late chance inside the six-yard box with Pablo Sarabia, and Wojciech Szczesny throwing himself at the Spaniard’s feet. Others might have scored too: Gerard Moreno had a shot into the side netting and the penalty against the post, the first he had missed in 14. Both of those might have been “decisive”, Luis Enrique said.

There was something familiar about this, yet for all the similarities the Spain manager insisted that this was not the same as the opening game. It was not just a case of missed chances. “We missed a lot of chances and they scored a goal without doing much, in a move we have to defend better,” Rodri Hernández said.

Jordi Alba talked about Spain lacking that “little bit of luck.” Rodri was joined by Sarabia in criticising the state of the pitch, the coach too noting that it had been as bad as it was during the 0-0 draw with Sweden. There is an irony there, questions to be asked. This is the place ellos chose. Not just because these are Spain’s home games but because La Cartuja replaced Bilbao for reasons of finance more than football, a deal signed between the Federation and the Andalucían government to host the national team and the cup finals in this great white elephant of a stadium that had stood unused for so long (and for a reason).

But they insisted the surface was no excuse. Luis Enrique admitted Spain had not created the chances he hoped, that Poland had caused them problems Sweden never did, and that his team had not controlled the game. “But we needn’t flagellate ourselves too much," él dijo, which revealed something of the mood. Asked by the media how he would keep the atmosphere calm and positive, he turned to sarcasm: “That’s what you’re there for," él dijo, revealing the tension lurking there too.

“There wasn’t much fluidity in moving the ball,” Luis Enrique added. There was a vulnerability about Spain every time Poland attacked – Aymeric Laporte has had a difficult start to his Spain career – and a fragility to them everywhere, a lack of leadership that becomes self-perpetuating and echoed by the crowd, by everything that surrounds Spain now.

This is a young, talented and technical team that can feel a little bloodless, lacking edge. The penalty miss seemed to sink them and although there were late chances, Luis Enrique admitted those came more through desperation than design, scrambled opportunities rather than clear chances constructed.

Beyond the obvious response of remembering the absent – Iago Aspas, Bryan Gil, Jesús Navas, Sergio Ramos – there were doubts about the management of resources of those actually available. Moreno was included, and played well in the first half, but not in a central role. Later he and Morata both made way, leaving Spain with a forward line with no strikers, Sarabia, Mikel Oyarzabal and Ferrán Torres up front together. At times it can feel like more of the same.

Adama Traoré, called up as a plan B, something different for moments like this, was left on the bench. So too was Thiago Alcántara. Koke, the best of the midfielders, was the one that departed. Changes were made but didn’t change much. Maybe next time: for the final match, Luis Enrique hinted at a different side, the return of Sergio Busquets one obvious shift. “Maybe when you get a moment of [mental] block, it’s time to take a look at other players," él dijo, insisting that he was desperate to get back to the hotel and analyse the match properly.

Spain have won just one of their last four games – and that was the one they didn’t play, the U21s stepping in as an emergency selección. They have drawn eight of their last 14 matches and can’t afford to make that nine of 15. Three times Spain have been in this position, drawing their first two games at a major tournament – in 1984, 1994 y 1996 – and every time they reacted and reached the next round. A draw against Slovakia might be enough to sneak through in third but probably not, so they must win. “A match ball,” Luis Enrique called it.

“It’s like the knock-outs start on Wednesday,” Pau Torres said.