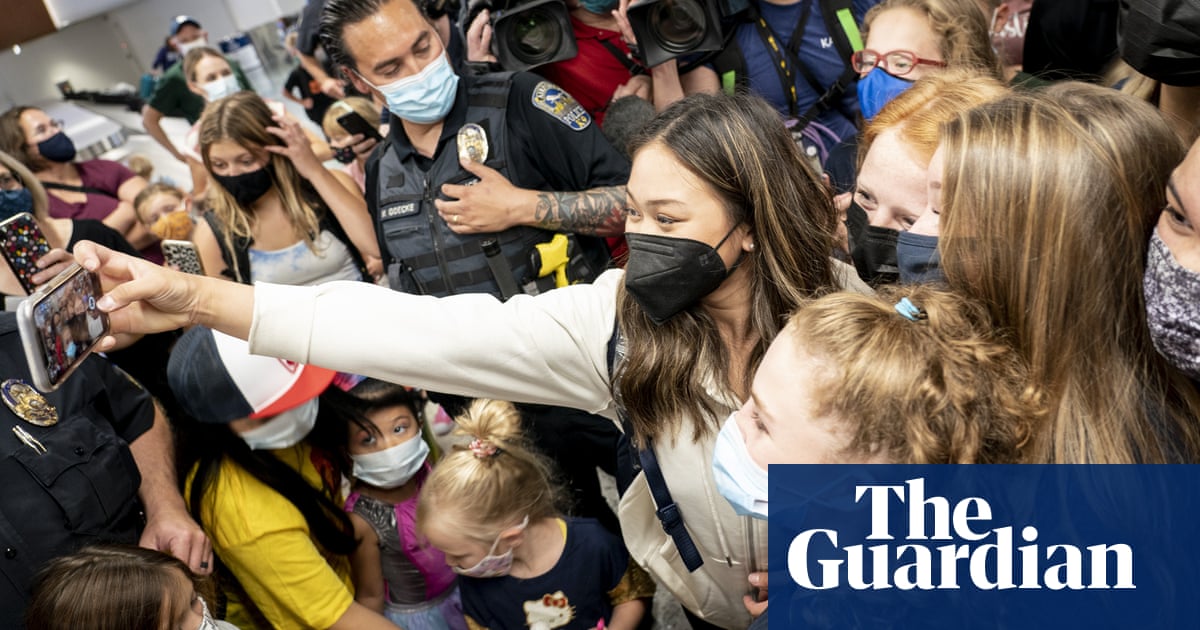 The chants of “Suni! Suni! Suni!” rang out in the Minneapolis-St Paul international airport terminal as soon as their new golden star, Olympic champion gymnast Sunisa Lee, stepped foot off her plane, home from Japan.

Lee was greeted like a true champion in her hometown after capturing gold in the all-round competition at the 2020 Olympic Games in Tokyo – so named because they were delayed from last year by the coronavirus pandemic – when Simone Biles, who had been expected to take gold, suddenly withdrew from most of the competitions.

In Minnesota, homemade signs adorned with glitter and a spectrum of colored paint waived wildly and balloons bobbed as the 18-year-old gold medalist appeared in front of the crowd of hundreds in the airport terminal.

Chants of “Suni!” were joined by joyful shouts of “USA! USA! USA!” Lee also claimed the silver medal in the team competition, and bronze on the uneven bars.

The 5ft-tall gymnast, now an international household name after her performance, was lovingly mobbed by fans who anxiously waited to congratulate the first ever Hmong American Olympian.

Her teammate Grace McCallum, of Isanti, Minnesota, was also showered with praises by the crowd.

The Isanti mayor, Jeff Johnson, and St Paul’s mayor, Melvin Carter, were also in attendance to welcome the Olympians, carrying floral bouquets as gifts to the athletes.

“It’s something we can all celebrate together,” Carter said. “This means everything to our community. Also, Suni is just a good person.”

There were plenty of children and parents in the crowd, including Bo Thao-Urabe, of Eagan, Minnesota, who came to the airport with her 10-year-old daughter. Thao-Urabe told a local newspaper that while the victory was certainly one that Lee should claim for herself, it was a win that many others could share.

“The Hmong community has lost so much throughout history,” Thao-Urabe said. “Her win shows what’s possible when a community is given opportunity and support. All our children can succeed.”

Lee’s parents fled the invasion by the communist North Vietnamese into Laos during the Vietnam war.

As Lee arrived home from the Olympics on Thursday, a 13-year-old girl named Hannah Wilson showed off her handmade sign, which in sparkling letters read “Congrats Suni. Good luck at Auburn.”

Lee has already signed on to attend the Alabama college, known for football success, but will surely receive more attention in gymnastics now that they have an Olympic gold medalist on their roster.

Wilson, who told the local media that she sometimes watches Lee practicing and sees her dedicated work ethic, said she is amazed and inspired by Lee’s example. “It’s so cool. Maybe someday I can go to the Olympics.”