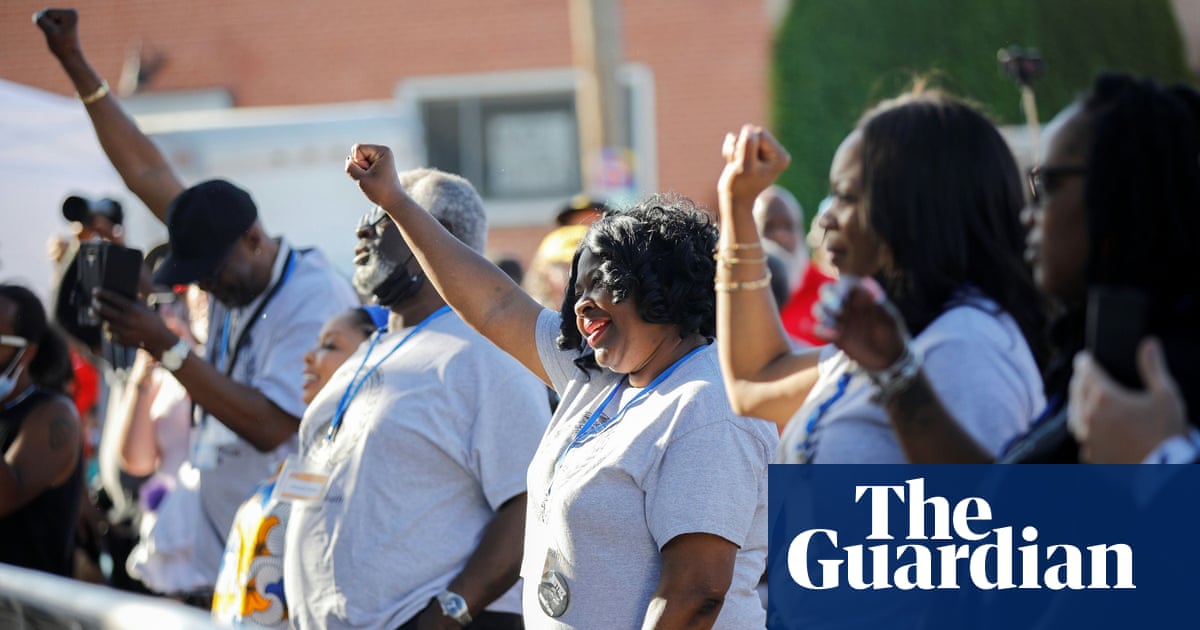 In downtown Minneapolis, the city that was plagued with tension during the Derek Chauvin murder trial last month, a celebration of George Floyd’s life was held less than a mile from where the white former Minneapolis officer was convicted of all three counts of his murder.

The event, organized by the George Floyd Memorial Foundation, was filled with shrieks from children as they leapt in bouncy houses while others filled the air with bubbles. The smells from a dozen food trucks penetrated the space as people danced and basked in the sun.

“I consider this a celebration of life and George Floyd,” said Theodia Henry as he sat with his family in downtown Minneapolis. “I haven’t seen this in a long time. It’s peaceful and people are dancing.”

Organizers and community members clapped and stepped to line dances as popular hip-hop and R&B songs blasted on the speakers.

On the stage in the middle of the field, members of the Floyd family, the Minneapolis mayor, Jacob Frey, the former president of Minneapolis’ NAACP Nekima Levy Armstrong, and others spoke to the crowds of people.

“It’s been a troubling year, a long year,” Floyd’s sister Bridgett told the crowd. “But we made it. They say with God all things are possible and I’m a true believer in that … The love is very outpouring today. The love is here. George is here.”

Floyd’s killing a year ago spurred dramatic protests across Minneapolis that spread to the rest of the US and eventually the world, calling for an end to racism and especially police brutality. Floyd’s dying plea, “I can’t breathe,” the same last words as Eric Garner, who was killed in New York in 2015, became a rallying call as tension between police forces and civilians came to a head.

“George Floyd wasn’t an act that was only about American justice, it was global,” Michael Jones, 59, said as he sat at a table in his wheelchair. “There were protests around the world at the inhumanity of that officer with his knee on his neck.”

In the days leading up the day of remembrance, organizers across Minneapolis hosted a series of memorial events. As well as events in Minneapolis, a moment of silence was also held in New York and a rally was held in Los Angeles to honor Floyd. Globally, rallies took place in Greece, Spain and Germany to mark the day.

Despite the beaming sun and humidity, protesters bore the heat to pay their respect to victims and vow to hold police officers accountable.

Amid chants of “you can’t stop the revolution” and “I believe that we will win,” family members of Floyd, Daunte Wright, Breonna Taylor, Oscar Grant, alongside family members of local victims of police brutality, marched with protesters.

The intersection of 38th and Chicago, also known as George Floyd Square where Floyd was killed, was set to host a candlelight vigil along with musical performances.

Many people expressed their disappointment with the lack of concrete change they have seen in policing in the year since Floyd died. Calls to defund, abolish or rebuild the police force have circulated across the United States.

“The only time we are going to see change is if we dig up the whole system, the whole United States system and rebuild it,” said Trinity Shaw, a 22 year-old activist who lives near the third police precinct that was burned down last May. “White supremacy is so ingrained in the system that there’s no way around it.”

While some people are doubtful that change will come, others said they feel a shift coming.

“We are on the move. Like when Martin Luther King said, ‘We’re on the move and change is going to come,’” Jones concluded.

Chauvin awaits sentencing, but faces up to 40 years in state prison for his murder charges. The three other fired officers involved in George Floyd’s death are set to go to trial next March.

Sigmund Freud was unavailable for comment, but George W Bush saying Iraq instead of Ukraine when condemning “a wholly unjustified and brutal invasion” certainly suggests he still has a lot on his unconscious mind. The...

In seeking to prevent environmental breakdown, what counts above all is not the new things we do, but the old things we stop doing. Renewable power, for instance, is useful in preventing climate chaos only to the exte...