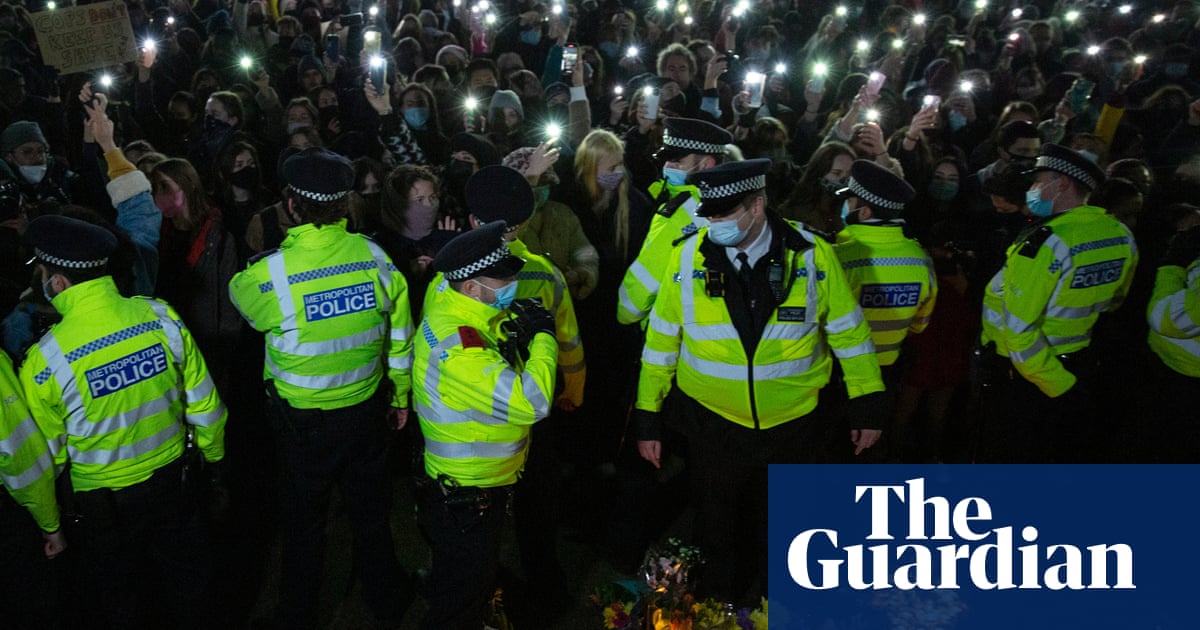 A Home Office minister has resisted immediate calls for the head of the Metropolitan police to resign over the handling of a vigil for Sarah Everard, urging people to wait for “explanations” from Scotland Yard for officers’ behaviour.

She said the Met should be “held to account by democratically elected politicians” and “explain their actions to the wider public”, but avoided calling – as the Liberal Democrats have done – for Cressida Dick to quit.

Scotland Yard sent out the Met assistant commissioner, Helen Ball, late on Saturday night to try to quell an outcry amid allegations that officers were heavy-handed at the vigil. But the claim that police had to intervene “where enforcement action was necessary” sparked further frustration by some of those in attendance who blamed officers for escalating what had been a largely peacefully event.

Atkins said Dick was writing a report to the home secretary, Priti Patel, to account for the police’s actions, but refused to say whether she thought the head of the Met should resign.

“This morning, given how difficult last night was, after what has been an incredibly upsetting week, I’m very keen that we don’t preempt the findings of that report and give the Met commissioner a chance to explain what happened last night,” Atkins told Sky News’ Sophy Ridge on Sunday.

Pressed on whether she thought that meant Dick should resign, the minister said: “The home secretary has asked for a report and I think that’s appropriate. The police are operationally independent but it’s right they explain their actions to the home secretary – particularly in the very, very difficult circumstance of this week. So I think we’ve got to take this step-by-step … I do hope we’ll be hearing explanations in the hours and days to come.”

Labour has also avoided calling for the head of the Met to quit. The shadow domestic violence minister, Jess Phillips, told the same programme: “If Cressida Dick stays or goes doesn’t make women in this country more safe and that’s what I want to talk about … We don’t need just to be angry, we need action.”

She said there were “so many missed opportunities” for police to have worked with organisers of the vigil to ensure it could go ahead safely. The gathering had been cancelled by Reclaim These Streets earlier on Saturday after police and a court hearing failed to give the green light for it to go ahead.

Phillips also expressed doubts that while ministers said this week had marked a “turning point” in the fight against violence against women and girls, change would come quickly enough.

“Every recommendation that has been made to the government … has been rejected by the government out of hand,” she said. “They have a majority in the House of Commons, they can turn their rhetoric into action.”

A government source signalled it were waiting for Dick to deliver her report or see what the Met said next before making further decisions.

Patel tweeted last night after the images of women being arrested surfaced, and said some of the footage “is upsetting”. She added: “My thoughts remain with Sarah’s family and friends at this terrible time.”

A serving Met officer has been charged with Everard’s kidnap and murder.

The government is also facing pressure ahead of a vote in parliament tomorrow on the police, crime, sentencing and courts bill. Opponents say it will give police further powers to restrict people’s right to peaceful protest, and one, the Labour MP Richard Burgon, said: “The last 24 hours has again shown why that is totally unacceptable.”