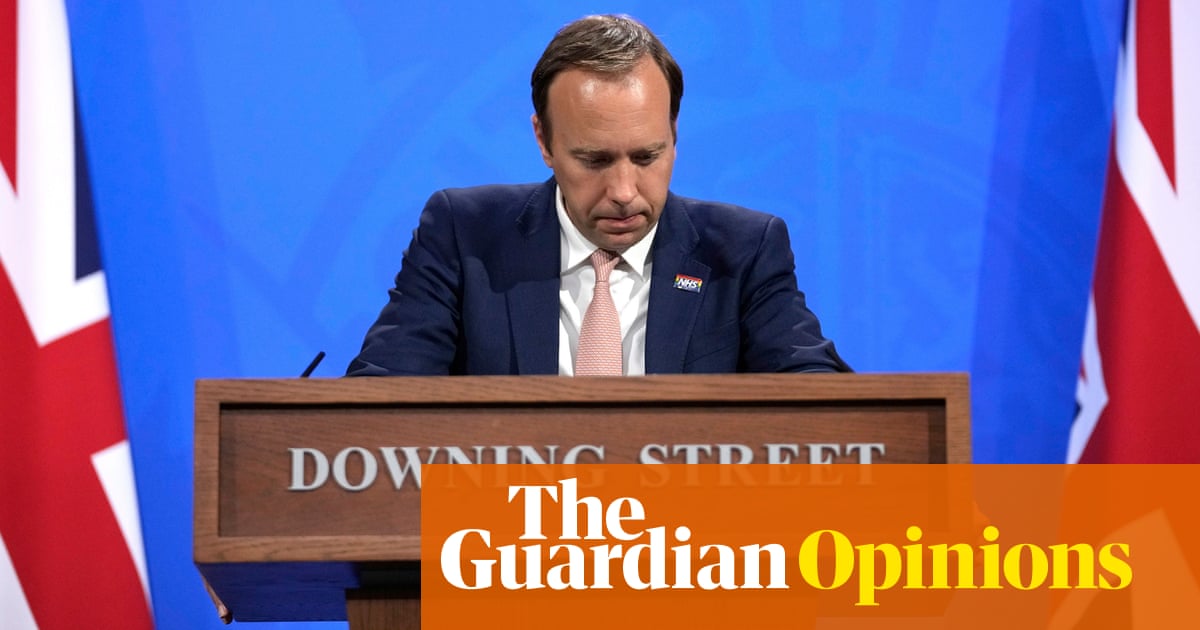 When Dominic Cummings gave evidence to MPs last week, few cabinet ministers came away unscathed. But one man suffered the most: Matt Hancock. While the former senior No 10 aide pulled no punches with his former boss, Boris Johnson – declaring him unfit to lead – it was the health secretary who ended up bearing the brunt of Cummings’ attacks.

Among the various missiles Cummings launched were claims that Hancock ought to have been sacked already for “15 to 20 things”, and was guilty of “criminal, disgraceful behaviour that caused serious harm”. The most serious allegation is that Hancock lied about protecting care homes from Covid in March – telling the prime minister residents would be tested before being sent back from hospital when that wasn’t the case.

Five days on – and despite a carefully worded denial by the health secretary that he committed to delivering that testing “when we could do it” – the story refuses to go away. As new reports emerge of Hancock being cut out of No 10 meetings last year and of questionable Department of Health guidance from that time, questions are being asked over Hancock’s future. The latest Opinium poll found that 44% of respondents believed he should resign.

They may be disappointed. Unless new evidence comes to light, few in government believe Hancock is going anywhere soon. It’s not just that the prime minister tends to suffer from what one close ally describes as “broken bird syndrome”, and rarely wants to sack people – “the more criticised someone is, the more he wants to support them” – it’s also the fact that the accuser is Cummings. For Johnson, this isn’t just about an allegation of ministerial wrongdoing: it is about who now calls the shots in 10 Downing Street.

To say relations between Boris Johnson and Dominic Cummings are at a low ebb would be an understatement. Even if the Tories retain their poll lead over Labour, the prime minister is bruised by the whole affair. Johnson was already known as someone who took a long time to place his trust in people, and he now trusts even fewer people than usual. These days, when things go wrong in Downing Street, blame is often placed on his former aide. Those in the building who are seen to have been close with Cummings and the Vote Leave team are regarded with suspicion.

This is why the vicious tone of Cummings’ attacks is likely to provide the health secretary some protection. “Matt is safer than people think,” says one adviser to the government. “It’s very ‘my enemy’s enemy is my friend’ in there at the moment.” If anything, there is more suspicion on a political level in No 10 towards the cabinet ministers who fared well in the session. The lengthy praise of the chancellor, Rishi Sunak, did not go unnoticed, and neither did the fact Cummings’ old boss, Michael Gove, was barely mentioned despite his being a key figure in the Covid response.

What’s more, were Johnson to turn on Hancock, it could turn attention back to Cummings’ criticism of the prime minister. Given that Cummings had plenty of negative things to say about Johnson, conceding he was on to something with Hancock could suggest he has a point about the prime minister too. Johnson and his team are reluctant to hand Cummings a scalp.

But that’s not to say that Hancock’s future in government is rosy. There are plenty of current and former aides who will attest to the fact Hancock’s relationship with the prime minister was strained in the early stages of the pandemic. The relationship hit a low over the PPE shortage – which No 10 aides squarely blamed on Hancock. It wasn’t uncommon to hear Downing Street aides distinguish “facts” from what they jokingly called “Hancock facts”.

On the other side, those working in the Department of Health often found No 10 hard to work with. The fact Cummings admitted in the evidence session that, as Hancock tried to reach his 100,000 tests a day target last spring, people were calling around saying “do not do what Hancock says” has only confirmed their sense that No 10 would often obstruct them. “Imagine working with someone like that every day,” says one ally of the health secretary.

The widespread dislike of Cummings is also helping Hancock when it comes to the parliamentary party – the majority of whom are taking the character assassination with a pinch of salt. “I’m not Matt’s biggest fan, but we know Dom isn’t a Tory and he has an agenda,” says one senior MP. “He doesn’t seem to know what middle ground is, either someone is a one out of 10 or they’re amazing. Why is no one a six?” The only Tory MP to publicly put his head above the parapet is Dan Poulter, who has called for an immediate inquiry into what happened in Britain’s care homes.

With Hancock’s position regarded as secure for now, the more immediate question is whether he can retain authority in his department – at a time when the ministers plan to assume more power over the NHS as part of a shake-up of the healthcare system. But the situation could still change. It is perhaps unsurprising the Tory party would prefer to take Hancock’s word over that of a man who they believe won’t stop until he has brought down the government.

New evidence or documents relating to Cummings’ claims could change the calculation. Cummings has repeatedly said he has messages to back up his claims and has been asked to supply these to MPs leading the committee inquiry. New witnesses, ook, to the Commons inquiry (and later the official one) could move the dial if they corroborate Cummings’s claims.

“We’ll stand up for him but not in the same way we would Priti,” says one 2019-er, referring to the home secretary, who is popular with the party membership and seen to closer reflect the electoral interests of the new electoral coalition. Intussen, lockdown-sceptic Tories have long been critical of the minister they believe to be one of the chief doves.

For now, egter, Hancock has the backing of the prime minister. So long as that remains beneficial for both sides, he will be safe.